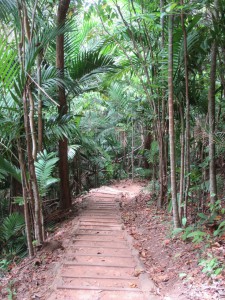 Starting out – boardwalk through the forest

Our planned trip to Mission Beach to walk the historic Kennedy Track on 23rd May has been confirmed. We will be joined by members of the Cassowary Coast and Hinchinbrook Branch of WPSQ, which was involved both in the construction of the track and in a hard-fought campaign to protect Kennedy Bay from a large and potentially very destructive ‘development’ in the 1980s. If you have not already let us know that you are intending to come on this trip, please do so as soon as possible.

Travel and Accommodation: It is a 3 hour drive from Townsville to Mission Beach (longer with stops) so it is expected that most will travel up and stay overnight in Mission Beach. For those wanting to return to Townsville on Sunday, we will aim to finish the walk in time for people to get home before dark. Mission Beach is cassowary country – please drive with great care!

Saturday 22nd Bingil Bay gathering: For those interested, we will meet with Suzie Smith (from the Cassowary Coast Branch) at 5.00pm (not 5.30) on Saturday afternoon for an introduction to the history of the reef and rainforest campaigns which had their origins at Mission Beach in the 1960s and particularly the colourful and passionate artist and conservationist John Busst. We can take a short walk along the lovely Bingil Bay beach to the commemorative plaque set in the rocks, inscribed by John’s friend and ally Judith Wright, and then up to John’s former home, the heritage listed Ninney Rise, set on the hill above the beach. Directions and map will be sent later or we can go in convoy from a central point.

Sunday 23rd meeting time and place: We will meet at 9am at the far end of the Kennedy Esplanade at South Mission Beach. There is a boat ramp and limited parking (but you can park along the Esplanade) and the track starts just beyond this point.

What to take for the walk: Please bring the essentials of strong walking shoes, hat, water and food. You would be wise to bring (and apply as necessary!) sunscreen, insect repellent, and a light raincoat. Cameras and binoculars are optional but very worthwhile extras. Walking is generally easy but there is some ‘rock-hopping’ involved over small boulders at one of the bays, and at one point the track climbs steeply. So bring walking poles or a stick if you are more comfortable with these. Since Cyclone Yasi the very basic picnic facilities at the bay no longer exist. 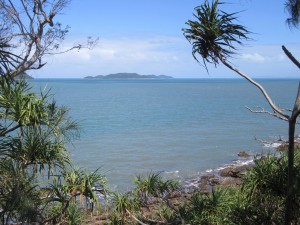 The coastal views are glorious

About the track: The track was hand-built in the 1980s by a group of local volunteers including, as mentioned above, members of our sister branch of Wildlife Queensland. It runs for 4km through varied terrain and scenery to reach Kennedy Bay which stretches from Tam O’Shanter Head to the Hull River. The beach extends for a further 2km to the mouth of the Hull – which can be an exhilarating walk if you have time, but probably a step too far for those heading back to Townsville that afternoon.

About Kennedy Bay: Kennedy Bay is of considerable significance for its natural values and is also culturally and historically important for Indigenous and non-Indigenous Australians.

Natural values and importance: Kennedy Bay preserves one of the very rare areas of un-logged lowland rainforest still remaining south of Cape York, and is a haven for cassowaries, musky rat kangaroos and other fauna. Trees include the Bumpy satin ash, Moreton Bay chestnut, Quandong, Red Beech and Cairns pencil cedars. In 1989 (?) most of the Bay was included in the Hull River National Park, a system of estuarine creeks, wetlands, mangroves, swamps and billabongs.

Indigenous values and significance: The Djiru Aboriginal people are the Traditional Owners of the area around Mission Beach, and retain a spiritual link and cultural rights and responsibilities relating to the care and use of country. There must have been an abundance of food available all year round, and varying with the seasons. The Djiru traditionally hunted and gathered food and other resources from the forests, sea-shore, creeks and rivers and – using bark canoes and outriggers – from the sea and neighbouring islands. Cone-shaped shelters (mijas) were constructed using lawyer cane or saplings covered with bark and palm fronds.

Non-Indigenous history : On 24 May1848 explorer Edmund Kennedy and members of the planned Cape York expedition landed at the Bay, in the barque Tam O’Shanter, after sailing from Sydney. They were accompanied by members of a marine survey party, also heading north along the coast, aboard the naval ship Rattlesnake and its tender, the Bramble. For nearly 2 weeks Kennedy’s party camped here preparing for this major undertaking and trying to find a route through dense forest, swamps and winding rivers, so that they could begin their journey north. It was only after local Indigenous people showed Kennedy how to cross the Hull River that they were able to set off, eventually having to travel as far south as Meunga Creek (just outside present-day Cardwell) before they could find a way to the hinterland. The area was listed on the Register of the National Estate in 1983 and is recognised as one of the few  places in Australia where one can stand at the starting point of a major exploration and observe almost nothing in the surroundings to indicate the subsequent passage of time, settlement and development. 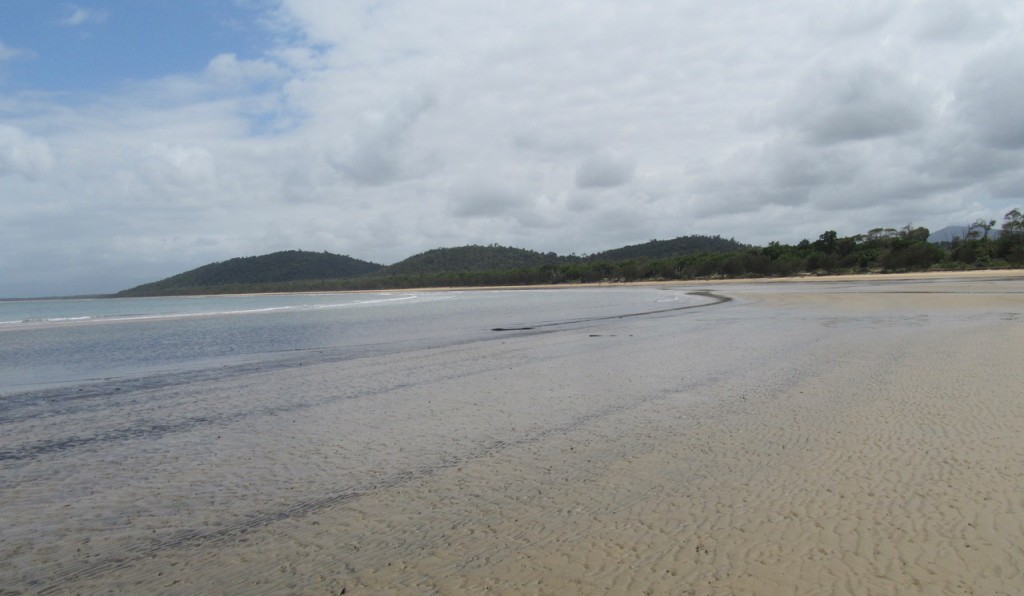 With acknowledgement to Qld Dept of Environment and Science for some information in this post.