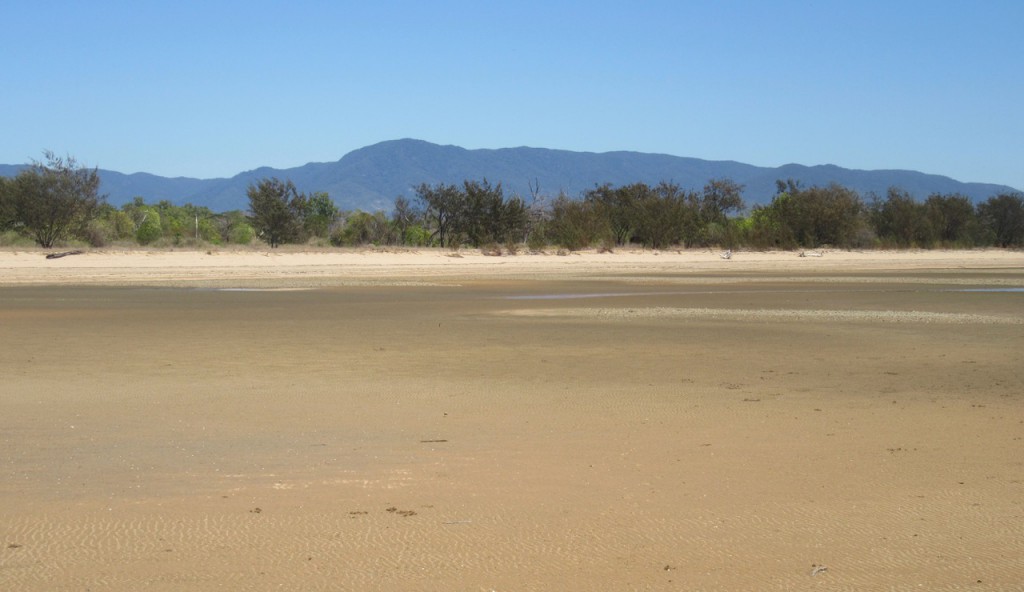 Looking back from the beach towards the Paluma Range. Liz Downes photo.

Our September trip, postponed due to illness, was rescheduled for the following month and gave an opportunity for those not able to join the regular mahogany glider project team, to view the project site and learn more about what the Branch has been doing over the last 18 months. In addition to our familiar faces we were pleased to meet a group of four “new” people one of whom brought his own ute – which proved extremely useful. 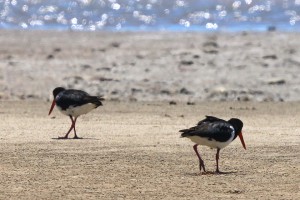 As conditions were suitable (low tide and a very dry track) we decided to drive through the site, leased to a local grazier, in order to get to the beach. We were rewarded by a wonderful stretch of sand exposed by the tide, great for fossickers and birders. Pam reported several species of terns (Little, Common and Black-naped) while red-capped plover, grey-tailed tattlers and a pair of pied oystercatchers (possibly my favourite shore birds), fossicked on the sand. 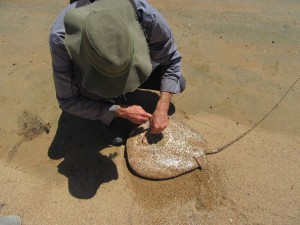 While the beach below highwater mark looked wonderfully clean (small recently deceased ray notwithstanding), we soon discovered plenty of rubbish in the dunes above that line. No doubt some of it had been blown or washed up by wind and waves but much would have been left by thoughtless humans. Before the locked gate closed access from the highway there had been a lot of 4WD drive traffic through to makeshift camp and picnic sites by the creek or at the beach – often leaving their trash behind. 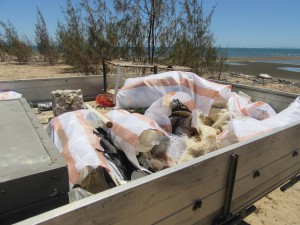 This was where Chandan and his ute (along with a large number of litter-collecting sacks) came to the fore. Taking a sack each we soon had these filled to capacity and loaded into the back of the ute.  Chandan had recently taken part in Tangaroa Blue’s clean-up on Hinchinbrook so brought some professional expertise to the exercise – not only that, he obligingly took it all away with him for disposal at the end of the day, earning our heartfelt gratitude. It was great having you along, Chandan!

As the sun became hotter we retreated to the shade a bit further back along the track for morning tea/lunch. Here Malcolm identified a species of paper wasp (Ropalidia romandi) that seemed to find us particularly attractive as resting posts but were quite harmless while undisturbed. Away from the beach a shining bronze-cuckoo, varied triller, white-bellied cuckoo-shrike and white-throated honeyeater were all noted. Plants observed included:  Capparis lucida (Coast Caper, Thornless Caper) with fruit and flowers,  Chionanthus ramiflorus (Northern Olive) with fruit, Euroschinus falcatus (Ribbonwood), Guilandina bonduc (Nicker Nut), and Vitex rotundifolia (Creeping Vitex).

Our convoy then moved on to one of several rough crossings over Ollera Creek itself where we marvelled at how much it had shrunk over the long dry months that followed the February floods. From there a walk through the bush brought us to one of our camera sites. 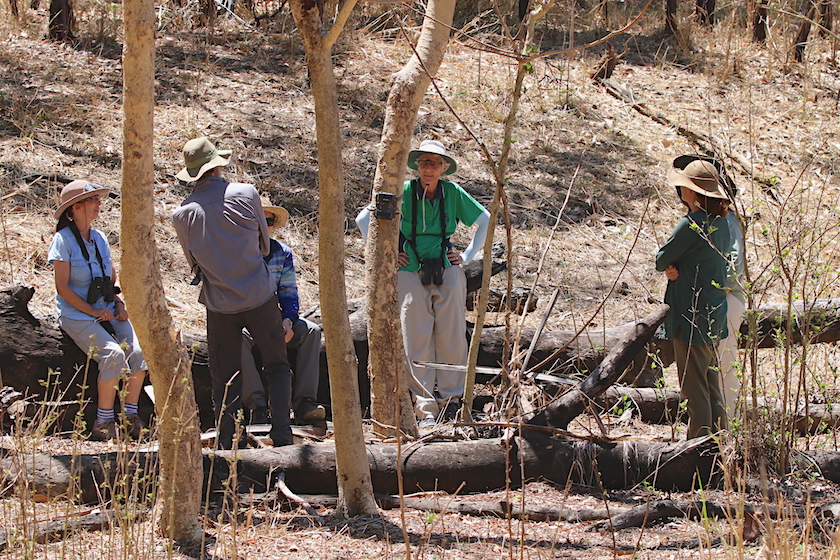 This was the first camera position where we recorded a confirmed photograph of a mahogany glider in May 2018 and where several later sightings have also been recorded – no doubt the animals are attracted by the sticky, but nutritious, sap exuding from the bark of an Albizia procera. These trees are particularly important to the gliders as they provide an all-season food source. Beth and Denise explained the process they have followed in setting up the cameras in transects across the site, the use of an attractant (cous-cous and cordial), careful recording of each camera position, and verification of camera shots by the mahogany glider recovery team. They also outlined our concerns for better protection of this habitat now that we have plenty of evidence that the gliders are present. We ended the day with cold drinks and ice cream at – where else? – Frosty Mango. 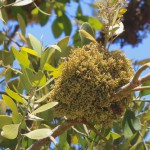 PS  Another account of the day has been posted by Malcolm Tattersall, who kindly supplied some of the images here, on his Green Path blog. You can read it here. He also further investigated a strange plant structure, photo at left, which he had observed on one of the trees behind the beach (tentatively identified as Beach Cherry, Exocarpos latifolius). You can read more here.

PPS There was some small excitement when we noticed some very large bird-prints on the sand. Cassowary sprang (or at least crept) to mind as technically the area has been identified as cassowary habitat – though we have never sighted any evidence – and they are known to come onto beaches. That was until someone gently reminded us that our prints clearly had 4 toes (3 forward, 1 backward) whereas cassowaries have no hind toe. Jabiru perhaps??