Ellison reef – where it all began. Photo Liz Gallie.

A wonderful celebration of half-a-century of battling for the Reef was held in October at the two places, on land and sea, where it all began: Ellison Reef which became the focus of a landmark court case and Ninney Rise, the heritage-listed house built by the artist John Büsst on the headland above Bingil Bay, which became the campaign’s unofficial headquarters.

It was in 1967 that John spotted, in the Cairns Post, an application from a cane-farmer seeking a permit to mine Ellison Reef for limestone. John immediately alerted his colleagues in Wildlife Queensland (then known by its full name, the Wildlife Preservation Society of Queensland) and this led to an epic campaign which united WPSQ, the Queensland Littoral Society (now AMCS), the Australian Conservation Foundation, scientists and journalists – and which was overwhelmingly supported by the Queensland and Australian public. This short video tells the story.

John died in 1972, so did not live to see the eventual outcome of his tireless work: the banning of mining exploration and exploitation, the declaration of the GBR Marine Park, World Heritage listing and the establishment of GBRMPA. But at times on that day it felt like he was with us. 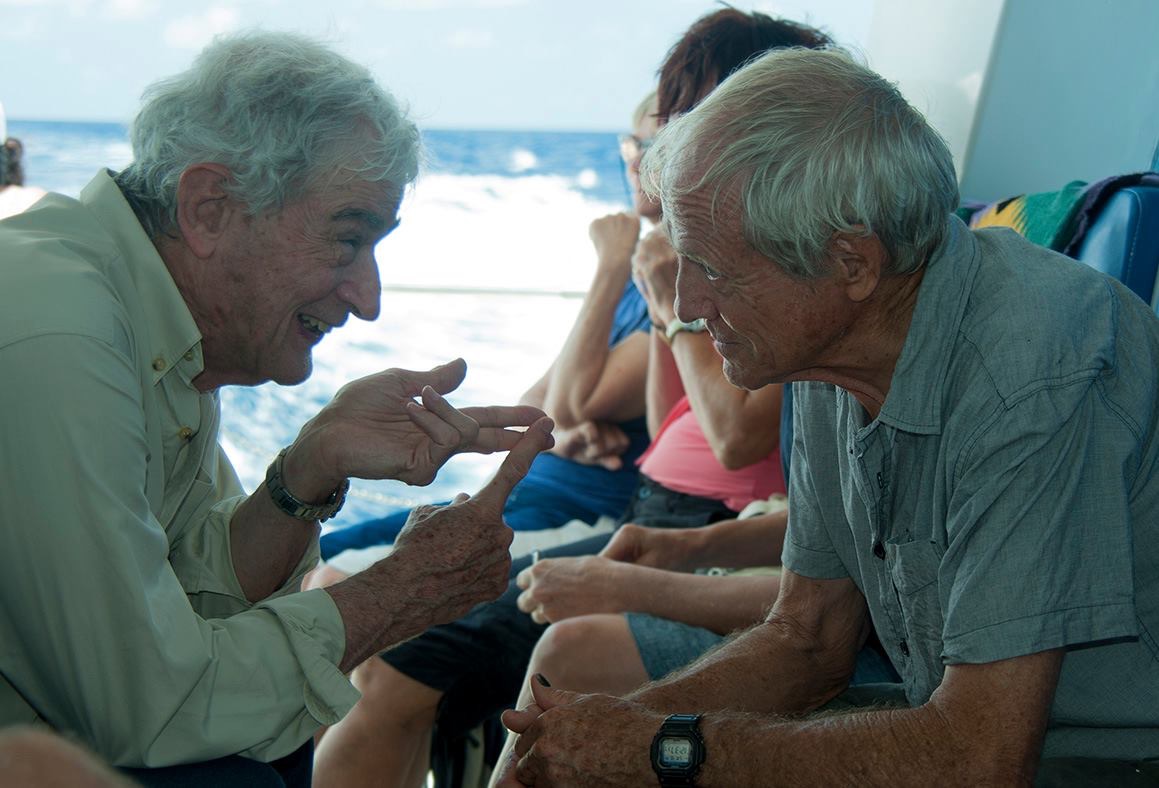 Last month scientists, historians, tourism professionals, conservationists and an ABC film crew were brought together for a two-part event: a morning trip to Ellison Reef and an afternoon forum at Büsst’s old home. It was attended by so many distinguished and expert guests that the organisers must have had a hard time selecting just 6 to make up the panel. Among them were “godfather of coral” Dr Charlie Veron and Eddie Hegerl who, as a UQ student in the 1960s came up from Brisbane to dive Ellison Reef and prove it was far from dead (as claimed). Side by side with John Büsst and Judith Wright, Eddie played an absolutely vital role in the campaign. It was disturbing to hear that in 2017 he found the reef had noticeably declined in health and diversity in the three years since his last trip. Others on the panel were Prof Bob Pressey and Tessa Hampson (both from ARC Centre for Excellence in Coral Reef Studies), Daniel Gschwind (CEO Queensland Tourism Industry Council), Ian McCalman (historian and author of The Reef: a passionate history), and Carol Sweatman (CEO Terrain NRM). 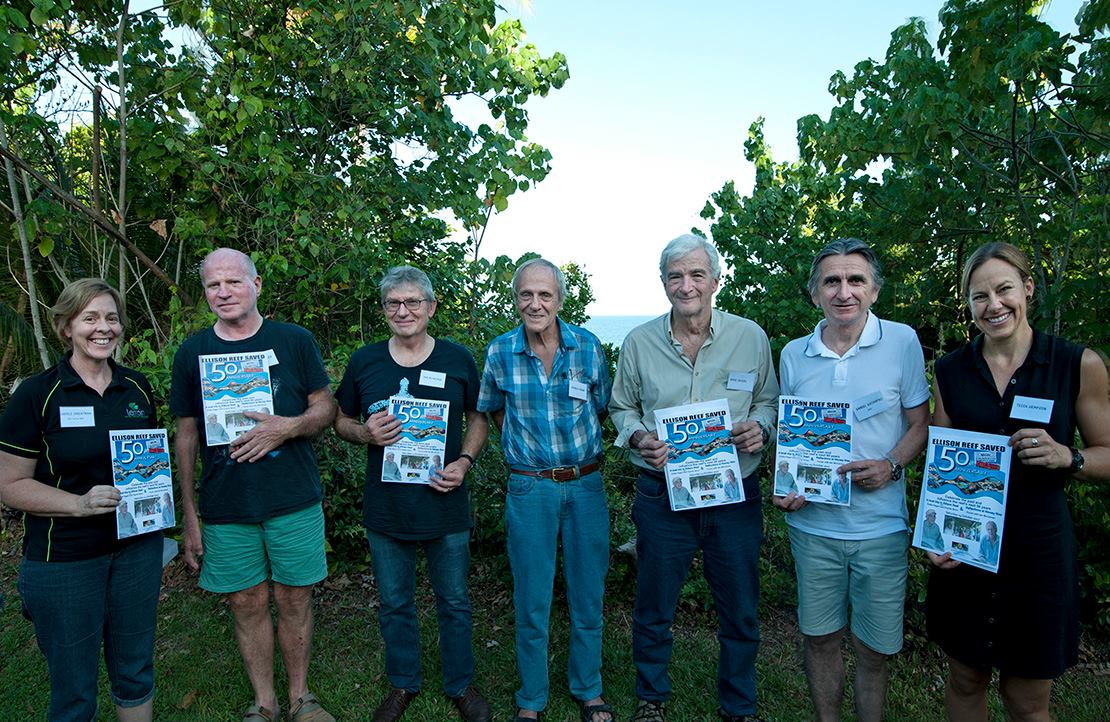 If you are sorry you missed it and would like to know more do visit this page on the Friends of Ninney Rise site. This has photos and downloadable audio of individual speakers at the forum, along with the questions and discussion which folllowed. And you can see a great selection photos of both the reef trip and the forum here.

Congratulations are due to the Friends of Ninney Rise team for organising such a significant, inspirational and successful event – with both land and sea components booked to capacity. For sure John Büsst would be in despair at the current state of his beloved reef, but how proud he would be of those who still have the fire in their bellies – and how he would have loved to have been a “fly on the wall” at his old home, urging us to never give up the fight for this most precious of all our natural wonders. 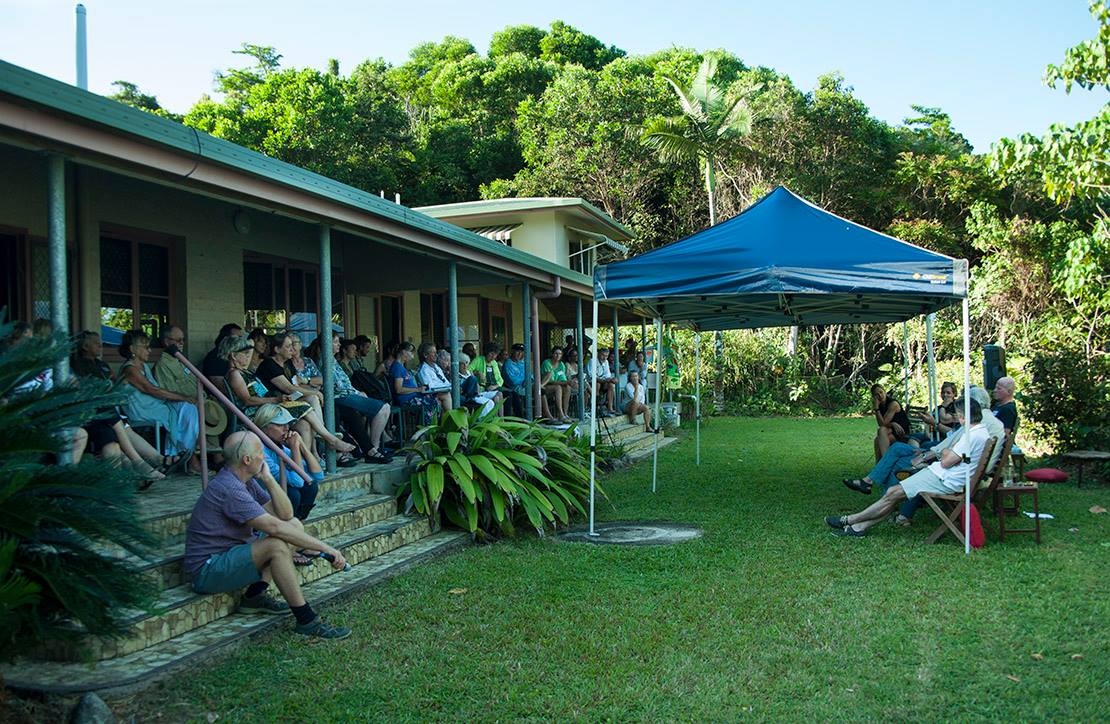 Over 80 people gather for the forum at Ninney Rise. Photo Liz Gallie.

Thanks to Liz Gallie from the Friends of Ninney Rise for the use of her photos in this post.