Two dogs, believed to have been harassing a cassowary, run out from National Park land onto a Wet Tropics “no dogs” beach where they continued to chase birds, uncontrolled by their owners. Photo courtesy Yvonne Cunningham.

Last night I attended a presentation by a highly motivated Mission Beach woman who, for the last two years, has been campaigning to strengthen the measures contained in Queensland’s Animal Management (Cats and Dogs) Act and increase its powers of enforcement. Her key goal has been to bring a Private Member’s Bill into State Parliament, and this Bill will be introduced by Rob Pyne, MP, next month. For the Bill to be successful parliament will need to be convinced of widespread community support.

Ingrid Marker felt impelled to take on this campaign after a horrific experience which occurred on her property and resulted in the death of 7 cassowaries (adults and young). In her own words: 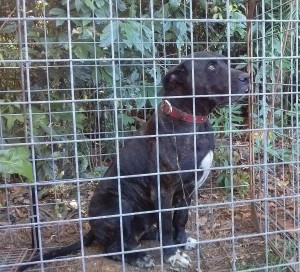 One of the dogs trapped on Ingrid’s property. Photo from Cassowary Keystone Conservation.

I watched in horror as roaming hunting dogs killed a family of cassowaries that visited my property. For four months the dogs banded together at night and killed all the cassowaries, and then came for me. I had to barricade myself in my bedroom after the dogs broke through the flyscreens. I caught two huge hunting dogs in large traps provided by QPWS  – but because they had collars on, QPWS was obliged to surrender them to Council. And Council could not prosecute because the offence occurred on National Park land. So these dog-owners never had to take responsibility for those dogs killing endangered cassowaries or terrorising me.

The fact that these were rural dog-owners provided another loop-hole, and residential dog owners would have been dealt with more severely – which, if nothing else, is discriminatory. As for the dogs’ attempts to attack Ingrid – for the police it was a Council issue and for the Council, as it occurred after hours, they had no-one to attend. You can learn more of this event here – be warned, some footage is distressing.

In trying to get action from local authorities and agencies (including local council, police and QPWS) she came to realise the many loopholes in state and local government laws, and the ways in which officers from these agencies have their hands tied. Some ludicrous anomalies emerged: such as the fact that whether or not a dog has a collar, or whether it is found or caught on National Park, residential or rural land, affects the action that can be taken. Local laws relating to domestic animals vary from council to council. For example, in some jurisdictions dogs defined as “working dogs” may be exempt from registration, while dogs in areas zoned rural can be registered for no charge. This is not only discriminatory but robs the council of income that could enable them to take enforcement action after hours.

Ingrid also became aware of how the issue of roaming domestic predatory animals or PDAs – which also includes cats – is not only a conservation concern. For citizens everywhere whether in rural, semi-rural or urban settings it is an issue affecting their sense of safety and well-being. She has been told countless stories by people who have been threatened or attacked themselves, have had their children attacked or have had their own companion animals mauled or killed. Others may have escaped actual attack but have been too often threatened by roaming or aggressive dogs, making them afraid to enjoy a simple walk in their neighbourhood or on a beach or bush track. It is also a major issue for farmers sick of having their stock ravaged by individual or packs of roaming dogs – a cause of very significant economic loss and often emotional distress too.

The aim of the proposed bill is not to remove people’s rights to own companion animals. Its aims are: to safeguard people’s rights to feel safe in an environment free from roaming PDAs and to protect native wildlife, domestic pets and livestock from escalating and dangerous attacks by these animals.

Ingrid states that the Bill will compel all councils to take action on roaming dogs and dogs lost while hunting; it will mandate responsible pet ownership, strong penalties for owners of habitual roaming dogs, compulsory desexing, and breeder licences for all people wishing to breed dogs and cats.

Ingrid has worked incredibly hard liaising with all levels of government and many other individuals and bodies. She has the support of the Commonwealth Threatened Species Commissioner and the Queensland Environment Minister. Now she is asking us all to spread the word and help build support for this Bill in the next few weeks. While the impetus for this Bill came from the Wet Tropics, it will bring benefits for the whole of Queensland and especially for our precious and vanishing wildlife.

Can you do some, or all, of the following things?