Those of you who do not read the Townsville Bulletin will not have seen an opinion piece titled Animal Crackers which appeared on 6 February. The journalist, while advocating humane treatment of wild and domestic animals, including when slaughtered for human use or culled for other reasons, turned her attention briefly to the topic of flying foxes in which her tone and language changed markedly. This is an extract:

“Hideous, foul-smelling, disease-spreading creatures, their filthy presence has taken over areas of Townsville and Charters Towers yet this growing plague continues unabated ….Calls for bat culls are opposed by animal activists yet as an animal-lover I’d gladly endorse a cull of this vile vermin”

While everyone is entitled to their opinion it is surely very wrong to demonise several species of native mammals, without regard for the facts, and in language likely to stir up fear and loathing. If people are encouraged to think about flying-foxes in these terms who will give a toss about humane treatment or the need for either conservation or compassion?

After channelling my inner-bat, I sent a response from the Branch which was published in full on 10/2, and is reprinted below. Many thank-yous to other members who also contacted the newspaper and/or the journalist directly. An invitation has been issued to the journalist to come to the Palmetum for a flying-fox interpretive walk, or at least to attend our next ‘batty’ event. 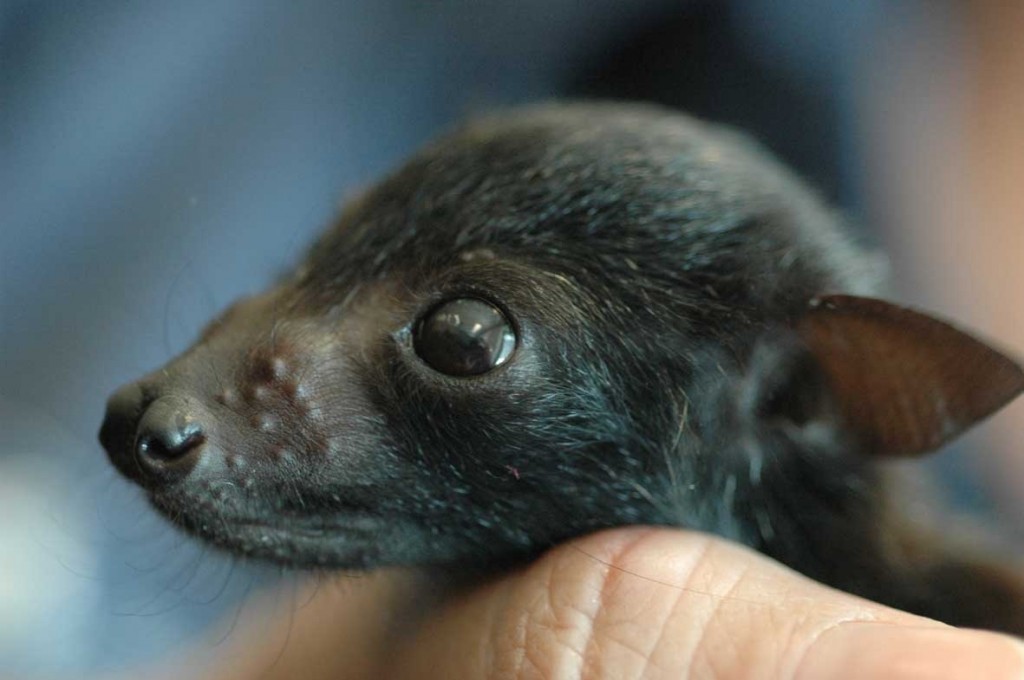 Oh my goodness, Shari, you certainly found a lot of horrible words to describe us flying-foxes in your article on Saturday even though what you said about being kind to other animals was great. We do agree that humans can be terribly cruel. But your descriptions of us sound so wrong we realise you really don’t know us very well and we hope you don’t mind if we set you straight on a few things.

Hideous? Shari, have you never met one of us or our babies? We’ve heard many humans call us beautiful, admiring our bright eyes, strong wings, and thick, glossy fur and the sight of our babies melts the stoniest human heart.

Foul-smelling? Oh no, are you talking about our scent glands and the secretions that help us find a mate?  Or the ones that help mothers and babies bond together? Or that keep our social structure working? You do know that those smells don’t come from our droppings, don’t you? We’ve heard humans say they prefer it to the polluting smells that thoughtless humans make.

Filthy? Shari, how could you? We spend hours cleaning and grooming ourselves, our babies and each other. And, when nature calls, we’re very careful to turn ourselves heads-up so we keep our fur squeaky clean.  We mostly do this when we are out at night, not at home in our roost, but we really can’t help it falling from above. Birds do the same and sometimes a lot of it – check out the ibis colony right next door to us at the Palmetum.

Disease-spreading? We know people worry about diseases, and why not, the world is full of them! But human scientists have found less than 1% of us have that nasty lyssavirus and have made a medicine that keeps humans completely safe. Please don’t make it sound like we’re all of us out to harm you, when harm can come from so many things (many other animals, but other people most of all) and hardly any of it comes from us.

Vile vermin? Nice bit of alliteration, Shari, but calling us bad names doesn’t help anybody. It only scares people and makes them hate us for no reason. Yes, sometimes people don’t like us living too close to them, but there are ways to help us all get along. Surely it’s better to talk about this than throw insults. Don’t forget all the good we do keeping the forests healthy – we’ve even been described as keystone species, pretty special don’t you think? – so if alliteration is your thing, we’d prefer Flying Foresters.

A growing plague? Sorry, Shari, not possible. Once there used to be far more of us than there are now but we were killed in thousands. We’ve lost so much of our forest that some of us have been declared threatened species. You may think you are seeing more of us than you used to because conditions outside town have brought us into the parks. We were happy down in the mangroves until something disturbed us. And sometimes our cousins join us if there is no food in the bush. But our females only have one baby each year, and many of those never grow up to have young. We’ve heard of human population explosion but, you see, it just can’t happen for us.

You say you’d be happy to see us culled (that means killed, doesn’t it, Shari?) but the way you talk about us it sounds like you don’t care how cruel that is, even if you care about cows, and cane toads and the others. It seems like you want everyone to fear or hate us so much that no-one will care what happens. We hope we are wrong because actions based on fear or misunderstandings about us will never work.

But, Shari, there’s another reason. The human friend who has promised to send this letter has told us that there is no animal welfare organisation in Australia that believes shooting of flying foxes is humane. So we really wonder what you had in mind?

Yours, on behalf of flying-foxes everywhere,