Saturday 21-Sunday 22 November: Our November trip will visit Mission Beach for the annual Pied Imperial-pigeon count. Although some members have taken part in the counts in years past, this is the first time that the Branch has incorporated them into its program.

Saturday 28th November: Climate Change march, meeting at 4pm at the Rockpool.  Bring your friends, family and passion for change – and, if feeling creative, why not bring your own banner or placard as well?  These marches will be held around the world in the days leading up to the 21st climate conference in Paris.

Tuesday 1 December: Movie screening of This Changes Everything, Event Cinemas, 6.30-8pm. Like the high-impact book by Canadian writer, Naomi Klein, on which it is based, this will enable you to re-think the challenge of climate change. Well done to NQCC for hosting this event (which incidentally is not a fund-raiser) and helping to bring this important movie to Townsville. As one review states: The extraordinary detail and richness of the cinematography provides an epic canvas for this exploration of the greatest challenge of our time …. this is not a film that tries to scare the audience into action: it aims to empower …. [and] will leave you refreshed and inspired, reflecting on the ties between us, the kind of lives we really want, and why the climate crisis is at the centre of it all.

Our Firefly night was a great success with about 35 people assembling on the river bank. Many were non-members who had responded to newspaper notices and were delighted by the experience. Read more here. 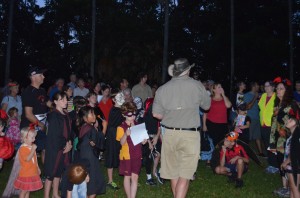 Halloween night was celebrated a day early by around 130 people, including many children dressed up in their “scary” costumes, who gathered at the Palmetum for a batty party hosted by NQ Dry Tropics, NQ Wildlife Carers and Wildlife Queensland. Ranger Dan and other batty experts kept everyone informed and entertained on the subject of both mega and microbats, children paraded their costumes (with plenty of prizes for different age groups), made and coloured in their own bat masks and enjoyed their spooky guided walks in the dark. The fly-out of the large colony of Black and Little Red flying-foxes which took place directly over our heads was a wonderful climax. Well worth the considerable effort involved – and one to repeat for sure. Photo courtesy of Tamara Large, NQ Dry Tropics.

The endangered Bridled Nailtail wallaby is in desperate straits. Once widespread throughout western Queensland, habitat loss and the impact of feral animals through predation and competition brought it to the edge of extinction. Now the only known wild population, in Taunton National Park(west of Rocky), is struggling to survive the drought. The Fraser Coast Branch has put out an appeal, backed by QNPWS, for volunteers to help with drought-feeding of these wallabies. Although this is a long way from Townsville, we know we have readers in many parts of the State – if anyone can help, or would like to know more, please contact Peter Reeders (Fraser Coast Branch) who has just returned from the area, or Peter Mowatt the Ranger at the park.

Townsville High students are doing a project on community attitudes to flying foxes in urban areas. They have designed a survey and would like responses from a good cross-section of the community. It will take just five minutes of your time to complete the survey.

The Adani Carmichael coal mine is again under challenge in the Federal Court. You may have seen the news reports that the Australian Conservation Foundation (ACF) has joined forces with the Environmental Defenders Office (EDO) to argue that Minister Greg Hunt’s approval of the mine failed to consider the impacts of coal burning and air pollution on the GBR.

Here are a few inexpensive suggestions that will surely please anyone interested in the natural environment and its wildlife and will help support worthwhile organisations. {Expired links have been removed 07/2022}.

NQ Wildlife Care Calendar from our local wildlife care group, featuring heart-warming photos of some of their patients. $14 including postage.

Coming of the White Birds DVD – I continue to be moved by the flow of comments from those who have purchased and viewed this documentary, several of whom have come back and ordered a second copy. Demand has meant a further 200 copies were produced for distribution but our stocks are dwindling. See our home page for ordering and info.

Wildlife Australia magazine – bring interest and enjoyment four times a year with a subscription to our very own standard-bearer. A 12 month subscription is $47.

A final word – in the context of the Paris climate conference – this cartoon from a year or so ago might bring a smile. In a way it’s also the perfect comeback for the denialists who carry on about how unnecessary it is to change our ways – for the better. 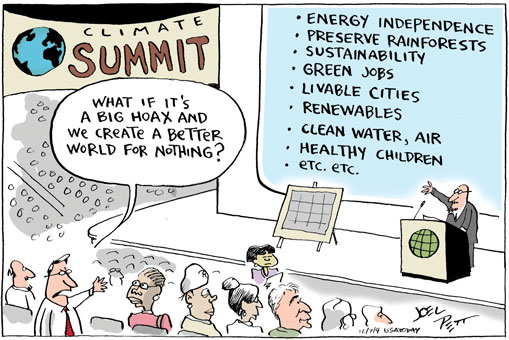