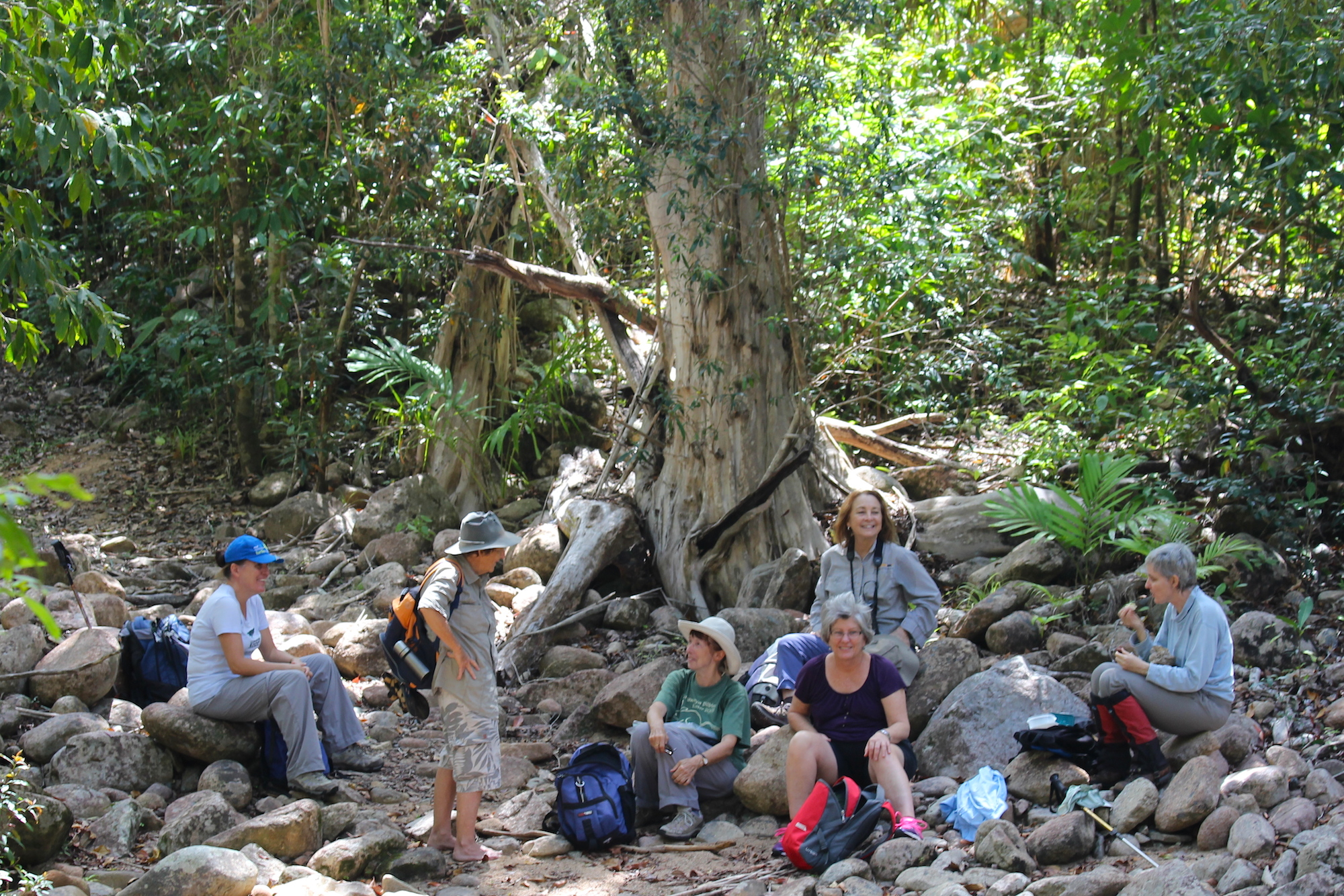 Smoko time at one of the many creek crossings. Malcolm Tattersall photo.

The Warrgamay people once occupied the land through which we walked on our September field trip and created the track now named for explorer and pastoralist George Elphinstone Dalrymple. Without it Dalrymple might never have found the route by which he eventually linked his property at Valley of Lagoons with the coast. The Warrgamay were happily unencumbered by the paraphernalia of European exploration, nor did they need to expend the effort and expense to “upgrade” the track to accommodate bullock drays, cattle and horses. Many thousands of pounds were spent on the track over the next few years yet eventually it fell into disuse as alternative routes were found for its different purposes and the establishment of a port at Townsville proved more accessible and convenient than Cardwell. 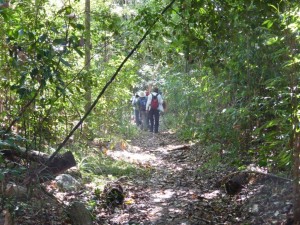 In September our group of sixteen were certainly less sure-footed than the Warrgamay but travelled much more lightly than Dalrymple’s party, enjoying a delightful return walk along roughly half of the 10 kms which is all that remains of the track today. Starting from within the Abergowrie State Forest at the track’s western end the first 25 minutes took us through open woodland before narrowing to single file as we approached the first crossing of Dalrymple Creek. From this point to where the track begins its ascent of the Seaview Range, to Dalrymple’s Gap, the creek is crossed eleven times. The early crossings are broad and filled with boulders and would be impassable after heavy rain but, having had so little of that in the last 18 months, the water was mostly less than knee deep and those prepared to scramble over the sometimes wobbly or slippery rocks could manage it dry-shod.

Our aim was to reach the fifth crossing which on previous trips has always proved a good place for lunch. At this point the track has entered the rainforest with tall palms and impressive lianas looping over our heads. There are large rocks and boulders downstream and some very deep pools after rain. From here a small group pressed on for about another 30 minutes to reach the seventh crossing, now quite narrow and carrying a mere trickle, before deciding that we were running out of time to go further. 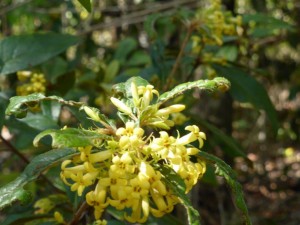 The botanists found much to interest and discuss – large and small. Alexandra, Elegant and Licuala palms are all found along the track, orchids and elkhorns adorn the tree trunks and the arching trunks and limbs of the “river gums” (Tristaniopsis exiliflora) are a beautiful feature of the first three crossings. The brown silky-oak (Darlingia darlingiana), yellow or hairy pittosporum (Pittosporum revolutum) and Cordylines (C. murchisoniae) were in flower and, once the rain comes, the many black pendas (Xanthostemon chrysanthus) will surely light the forest with their brilliant yellow flowers. Small ferns and mosses were seen on the forest floor along with the fallen fruit of the candlenut (Aleurites moluccana) and native nutmeg (Myristica sp.) A vine with very bright green leaves was (much later) identified as fire vine (Tetracera nordtiana). We were surprised to see quite a number of native banana specimens (Musa banksii) growing either in or beside the first few creek crossings. More plant photos are included in the Dropbox folder, see the link below. 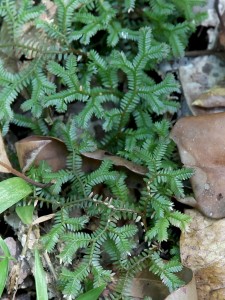 Birds were more heard than seen and, from brief glimpses or from their calls, we identified a lemon-bellied flycatcher, sulphur-crested cockatoos (too easy!), brown pigeons, wompoo pigeons, noisy pittas, orange-footed scrubfowl, and green catbird – among others. Several piles of cassowary poo on the track, though not fresh, gave evidence that this forest icon still finds a home here – mercifully safe from dogs and cars. Two of the walkers who returned slightly ahead of the rest surprised a few goannas on the track. Malcolm and Mike drew our attention to some interesting invertebrates and their observations, along with Malcolm’s excellent photographs, seemed worthy of a separate post. You can read it here. A few people picked up ticks and i was moderately afflicted by scrub itch, caused by the larvae of a trombiculid mite.

This beautiful track is not as well-known as one might expect but we did meet a few other walkers and, to our surprise, one mountain-biker though he ruefully admitted he was carrying the bike far more than he was riding it! Following our walk I have now updated and expanded the notes I made about the track some years ago, so please ask me if you would like a copy.

Many thanks to Malcolm, Margaret and Beth for their photographs – you can view a larger collection by following this Dropbox link. 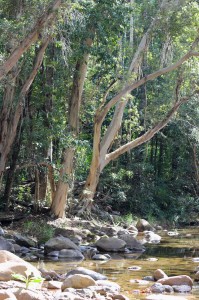 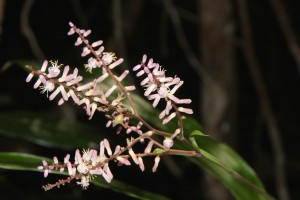