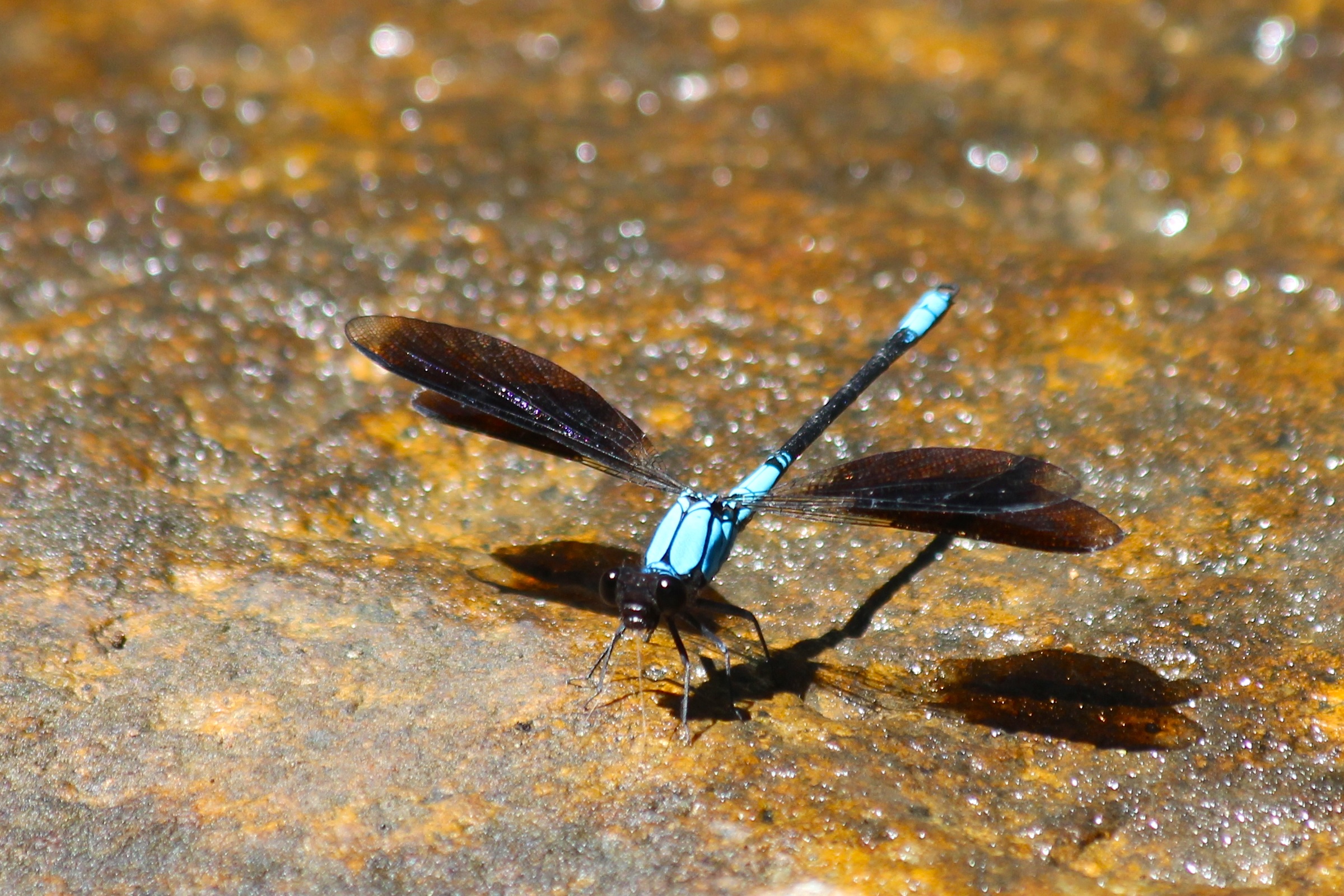 With the relative lack of butterflies, a beautiful bright blue damselfly was one of the most eye-catching of the invertebrates noted along the Dalrymple track. It was much admired at our lunch spot and Malcolm saw and photographed the same species at the first creek crossing on the return walk. Despite resting with wings outstretched, which is the usual habit of dragonflies rather than damsels, Malcolm confirms it is the latter, with the appropriately flashy common name, Tropical Rockmaster (Diphlebia euphoeoides). 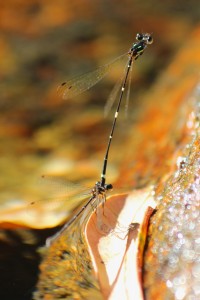 Also at the first crossing Malcom brilliantly captured on camera a pair of damselflies mating and laying eggs. (Click on photo to enlarge). While not sure of their ID he believes them to be the species Nososticta solitaria or Fivespot Threadtail. In the picture the male is hanging on to the female’s neck as she is about to curl her abdomen down to the water and lay some eggs. If you’d like to know more about what Malcolm calls the “complex and weird” mating behaviour of dragons and damsels follow this link.

Mike noted four species of ant along the track. Small black ants were seen in numbers on the path and adjacent trees forming foraging trails: these were one of the many diminutive forms of the genus Iridomyrmex which includes the very familiar large meat ant I. purpureus. A large, solitary, ground-foraging ponerine ant, Rhytidoponera sp., the only one of the four that has a true terminal sting capable of injecting venom. Some ponerine stings are very painful.

Large dark ants with silvery hairs on the abdomen were particularly conspicuous travelling in trails right at the start of the walk, presumably favouring a more open habitat. These were Calomyrmex sp., probably C. impavidus. Like the common green tree ant, Oecophylla smaragdina, they are formicine ants, using a bite and formic acid for defence rather than a sting.

Finally, a solitary, medium-to-large, shiny and spiny black weaver ant, Polyrhachis monteithi was found just where it should be, beside a rainforest creek. This is one of about eight similar species of tree-nesting weaver ants occurring in coastal North Queensland, and is the only one which has thoracic (strictly, propodeal) spines and a hairy back.There is another hairy species, P. pilosa, which lacks the thoracic spines.

As for the handsome beast (below) also found by Mike, we cannot give it a species name but the first thing you need to know is that, although an arachnid, and a spidery-looking one at that, it is not a spider. It belongs to the order of Opiliones, and within that order it is a member of the sub-order Laniatores. Commonly known as harvestmen, you can read more about them on Malcolm’s Green Path blog. It is quite likely that this species is little known or even unknown.

Meanwhile, Margaret had noticed and photographed the rounded dome shapes of a couple of termite mounds. She believes this shape to be characteristic of some rainforest termite species. The one pictured left was partly covered by moss, while another had a sapling growing out of it. We would love to hear from anyone who might know which species build these almost spherical structures.

Don’t forget to read the separate report on our walk along this track and to scroll through the collection of 28 photos in Dropbox. Thanks to all for sharing your knowledge and photographs.