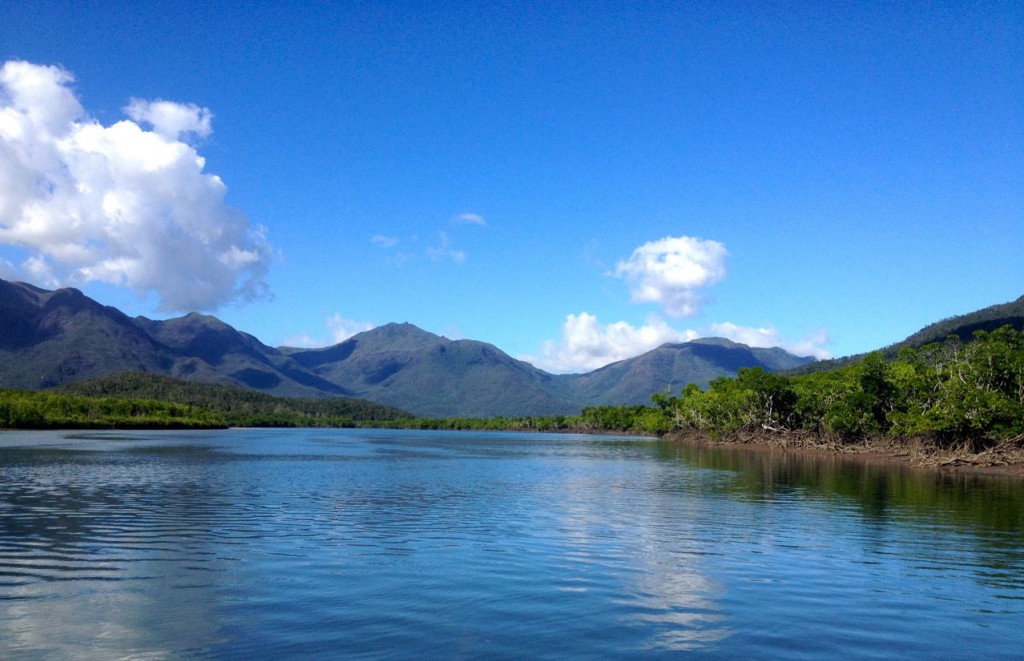 After two consecutive weekends of cold, wet and windy weather how lucky were we to score a perfect north Queensland winter day for our Hinchinbrook cruise! Our group of ten assembled at Dungeness in time for a quick snack in the park overlooking the Herbert River. Jackie and Ken who had come up the day before regaled us with descriptions of their late afternoon and early morning beach walks among terns, pied oyster-catchers and red-capped plover. 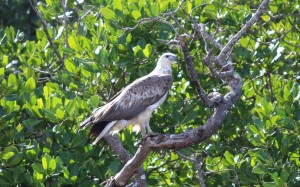 With the peaks of Hinchinbrook beckoning across the sun-dazzled water we were eager to board the small boat skippered by Phil Menzies.  Even as we pulled away from the boat ramp we were excited to see a striated (mangrove) heron and a beach stone-curlew on the rich muddy bank. It is impossible to describe adequately the magnificent beauty of the Hinchinbrook Passage – whichever way we looked there was a landscape to die for. Phil helped us identify the island’s Mount Straloch and Mount Diamantina as they came into view, as well as pointing out mainland peaks and features. 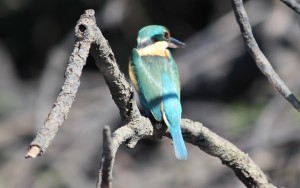 While the Passage is noted for its shallow waters and sandbanks Phil’s local knowledge, and the small size of the boat, allowed us to creep close to the mangroves, rocky cliffs and the edge of tiny Haycock Island. At one point he showed us the remains of a stone causeway built by an early settler, then brought us in under a cliff for wonderful sightings of a pair of sea-eagles. Later he nudged the boat up close and personal to an unconcerned collared (mangrove) kingfisher. 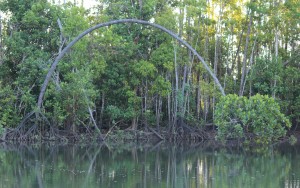 For many the highlight of the day was the long cruise up Deluge Inlet leading into Boyd’s Creek, the largest of all the island’s creeks. The massive bulk of the mountains and the lush vegetation reaching to their reflections in in the calm water created an enchanted world. I felt we were winding our way closer and closer to the heart of this unique wilderness. The inlet narrowed in places, then would suddenly open out revealing mid-stream mangrove islands and sandbanks that the rising tide would soon cover. Moving upstream, with the water turning from salty to fresh, the mangroves gave way to casuarina, melaleuca, eucalypts, palms – tall Livistonas (L.drudei) and fan-like Licualas. Elkhorns (Platycerium sp.) and at least one Cymbidium orchid (C.madidum?) were spotted in the trees and fallen wattle ‘catkins’ decorated the glassy surface of the water. Suddenly the sandy bottom was replaced by rounded stones, every detail visible through the clear water, and we had reached a point beyond navigation. 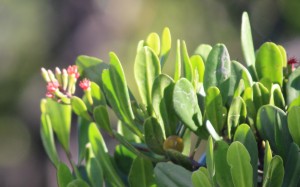 On our return journey Phil adapted our route to give still greater variety to our experience and in a magical half-hour steered us through the meandering inlets of the Herbert River. The lushness, denseness and intense green of the bordering mangroves was simply astonishing and we seemed to be drifting in a lost world from which none of us really wanted to return. Once again Phil impressed us with his observation skills, being the first to spot the crocodile reclining on the starboard bank. Most of us were lucky to see the splash as it slid into the water, but the evidence of footprints and slide marks was clear – as were the muddy swirls coming up under our bow! Reluctantly we disembarked having gone well over our allotted four hours but still hankering for more. A quick cuppa in the park and most of us were headed home but three over-nighters stayed to revel in Hinchinbrook’s mighty presence a little longer.

Many thanks to all those who contributed photographs of this very special place. To see more of Melissa’s lovely photos click here – then click on individual images to enlarge and view original or play slide show. 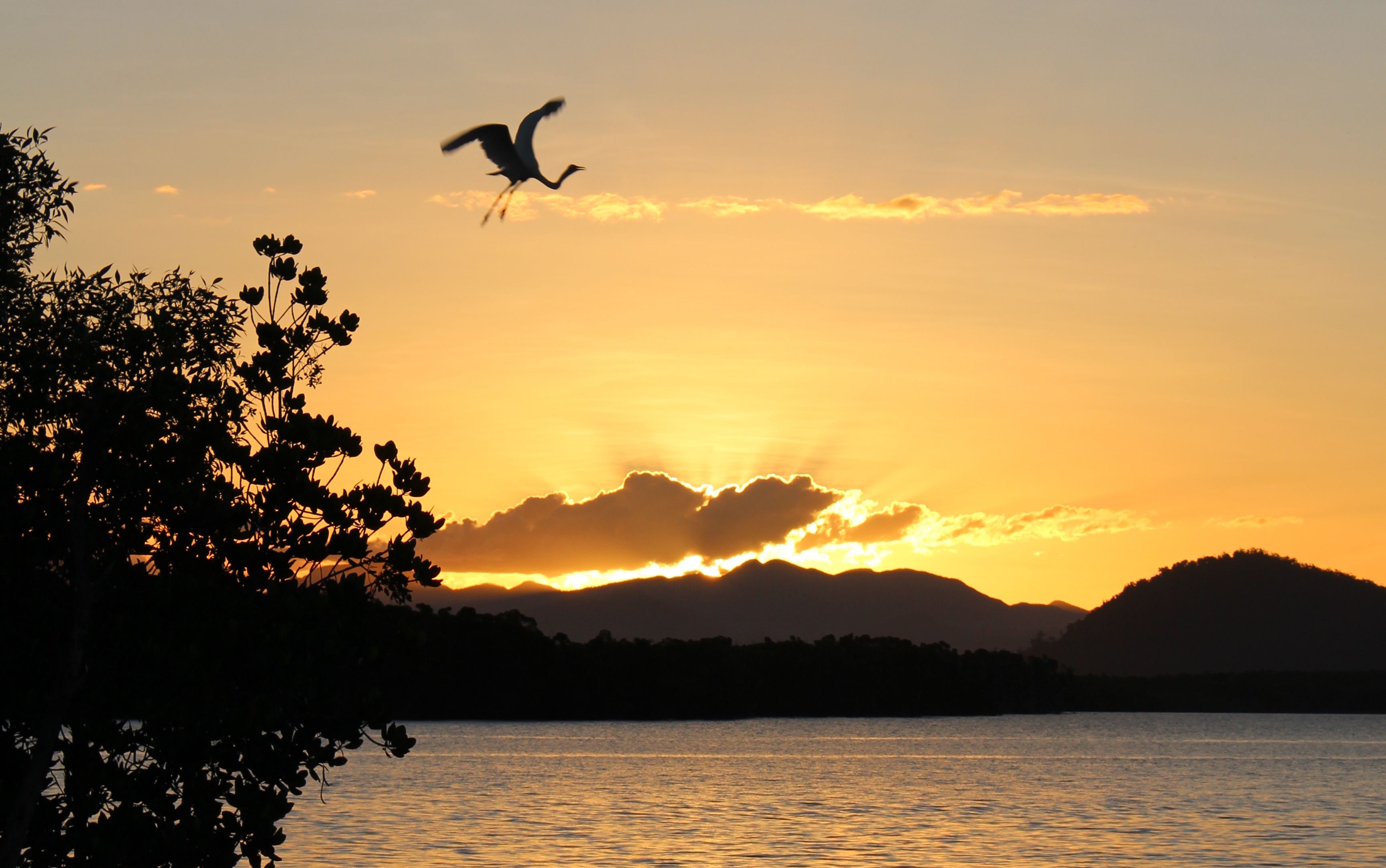 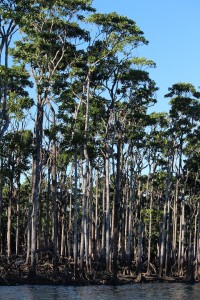 For more mangrove information Catherine Lovelock’s excellent pocket Field guide to the mangroves of Queensland (AIMS 1993) is available as a pdf.

The most comprehensive book on Hinchinbrook, combining natural, Indigenous and European history is Arthur and Margaret Thorsborne’s Hinchinbrook Island: the land time forgot (1989), with photographs by Cliff and Dawn Frith, available from libraries (or perhaps a trusting friend!).

A more recent book, by photographer Steven Nowakowski, is Hinchinbrook Island, a sacred wildness (2003). One of Steven’s stunning aerial photograph of the Passage, shows Haycock Island and the pyramid shaped Leafe Peak. 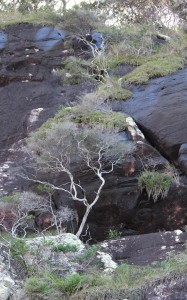 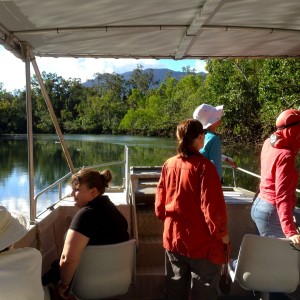 So much to look at! Photo Beth Ballment. 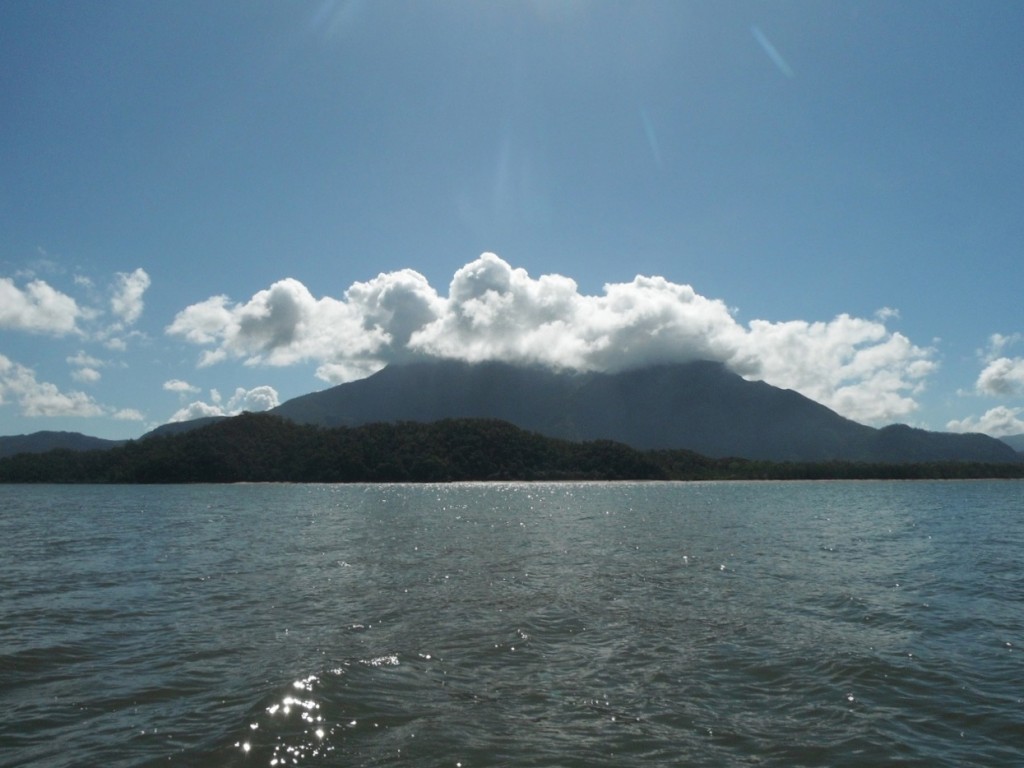