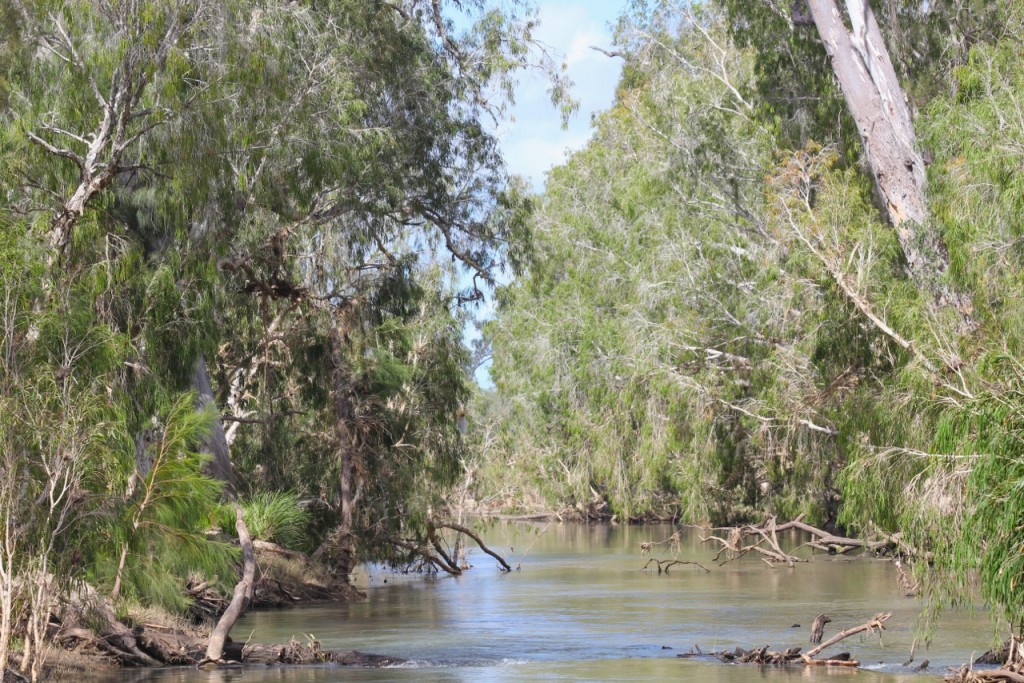 The last time I visited Keelbottom Creek was sometime back in the 1980s – I’m not even sure if the bitumen extended that far back then, there was certainly no big bridge across the creek, just a causeway that one negotiated with care. That visit must have been in the dry because we were able to paddle or wade about in the creek bed looking for aquatic macro-invertebrates and fish. How different it appeared thirty years later and so soon after Cyclone Ita had passed through, swelling the creek with flood rains.

The group met at Piper’s lookout (which seems to have lost the sign bearing its name) near the top of the range from where, at Glenda’s invitation we made a short detour to a small property belonging to her family. This brought the bonus sighting of a large wedge-tailed eagle circling and soaring not far above our heads while, at the other end of the size scale, striated pardalotes were calling from the trees. Then it was on to Keelbottom – also lacking a name-sign, so it was as well that we were following Malcolm who knew where to stop.

Upstream from the bridge the swollen creek stretched from bank to bank so we decided that downstream would provide a more interesting walk, where broad expanses of sand made access to the water easier. A few Anzac weekend campers were still enjoying this popular camping and fishing spot but, given that this followed on from the Easter weekend and school holiday period, we were pleasantly surprised at the relatively small amount of litter and camp debris to be seen. 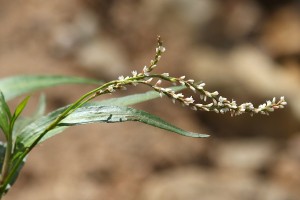 Smoke from one camp fire up ahead of us began to attract a few black kites – two or three at first, rapidly increasing to several dozen, which dispersed almost as quickly when the fire died down. The creek (almost grown-up enough to be called a river after Ita’s deluge) is beautiful here, overhung by melaleuca, river she-oaks and here and there some stately eucalypts, E. tereticornis. A small specimen of black penda (Xanthostemon chrysanthus) was growing near where we stopped for a morning snack, as was the herbaceous perennial Persicaria attenuata or white smartweed. 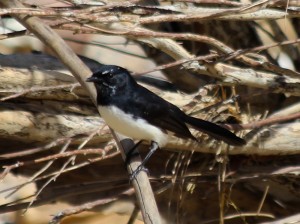 Following the cyclonic deluge the river was still very full and flowing swiftly, but the flood debris way above our heads gave an idea of what it must have been like a week or two earlier. Two of us could not resist a swim and it was delicious to float downstream with the current, a lot harder to get back to where we started! Small birds like willie wagtails, honeyeaters and fantails were busy in the trees and a black kite posed for photographs. There were plenty of fish, mostly small with different patterns, though as far as I know none were the exotic pest, tilapia.

Brilliantly coloured dragonflies danced over the water, particularly the blue skimmer (Orthetrum caledonicum) and the scarlet percher (Diplacodes haematodes) as well as damselflies. If you are, like me, unsure of how to distinguish a damsel from a dragon, here’s a useful tip from Malcolm. Think of the big, bold dragon out to impress by resting with his wings outstretched – then imagine the smaller, shy damsels demurely covering their bodies by folding their wings. (Of course, to every rule there are exceptions and some damselflies, less demure than their sisters perhaps, adopt the assertive dragonfly pose – in which case more sophisticated identification methods may be needed!). Butterflies included common crows, grass yellows, migrants and a solitary argus and skinks were enjoying the sun on rocks and tree-trunks. One of the Tetragnatha genus of spiders, probably the long-jawed spider (T. nitens) literally dropped in for a visit (see photo in our February trip report) and orb-weavers (Cyclosa sp.) were plentiful at Speed Creek.

It is worrying indeed to think of the potential for these waters to become seriously contaminated from activities at nearby Ben Lomond if the uranium mine is given the go-ahead by the Queensland Government in a few weeks time. Do stay tuned to this issue in the local media and I will endeavour to provide information as it comes to hand. 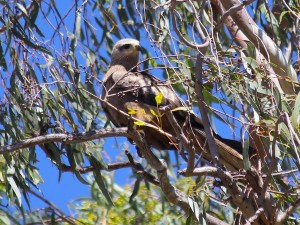 From Keelbottom we also stopped at nearby Speed Creek which interestingly at this point runs roughly parallel with Keelbottom but in an opposite direction! This proved a good place for lunch where there were more fantails, honeyeaters and willie wagtails, as well as double-barred finches, pale-headed rosellas and yet another posing black kite. Before returning to sea level six of us called in at the Heritage Tea Rooms for tea, coffee and cake in their attractive gardens. A very large, very black cloud looked ominous but we enjoyed the refreshing sprinkle that penetrated our shade umbrella while those big tough bikies at the next table ran for shelter!

Once again, thanks to all who came and especially to Malcolm and Glenda for photographs, local knowledge and advice. Bird list follows: