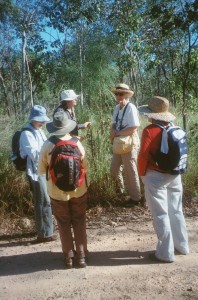 There were plenty of plants to discuss and identify.

“Of all the tropical plant communities to be found in north Queensland, none is more enchanting and uniquely diverse than the tropical lowland Tea-tree woodland. Home to a remarkable diversity of plant and animal species, this rich habitat represents a magnificent but threatened coastal vegetation community.” So wrote botanist Stephen Skull in his delightful little book, Plants of the Melaleuca Woodlands. Yet for years they were regarded, at best, as poor cousins to the grander rainforests and, at worst, as “rubbish country” of no economic value and fit only to be cleared.

It was therefore a pleasure and a privilege to be able to spend a few hours in one of the remnants of these enchanting woodlands, just as they were coming into their most attractive time of year. To correct previous information, I should point out that this small area between highway and beach is now part of the Paluma Range National Park while a larger area west of the highway remains State Forest, with much lower protection. Considering its importance this is something which concerned me as we moved at our usual sauntering pace along the 3km dirt road leading to the beach. As always it was the journey not the arrival that mattered. While Melaleuca species set the character of these woodlands, other species are in abundance – of the wattles A. flavescens was laden with fluffy, cream-coloured balls and A. crassicarpa was golden with yellow tassles. Some Golden grevillea were already showing their brilliant orange blossoms, and the Melaleuca viridiflora were also coming into flower though we looked in vain for the red variety; a quinine bush near the road was covered in bright orange-yellow berries. Of special interest were the endangered Livistona drudei palms, and the unusual Ant plant which must here be at, or close to, its southern limit. In a three-way symbiosis this intriguing epiphyte plays host to the larvae of the rare Apollo Jewel butterfly (Hypochrysops apollo) and to their attendant Golden ants (Philidris cordatus) which inhabit chambers in the plant’s globe-shaped tuber and aid its nutrition and dispersal. 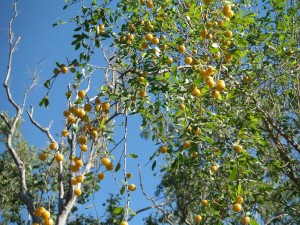 Noisy friarbirds feeding on the Melaleuca flowers were the dominant birds, along with flocks of little friarbirds swooping from tree to tree, rainbow lorikeets likewise. Spangled drongoes, a white-bellied cuckoo-shrike, brown and yellow honeyeaters, a leaden flycatcher and grey fantail were seen in the forest while red-tailed black cockatoos were closer to the beach. At our smoko stop, beneath some beautiful weeping paperbarks, on the edge of a large saltpan, a crow tried to persuade us it was a raven with its long trailing call – we were not convinced. John and Leslie sighted a large grey kangaroo and we should not forget that this woodland contains all the requirements for the endangered mahogany glider which, though not recorded here, has been sighted not too far away at Ollera Creek. 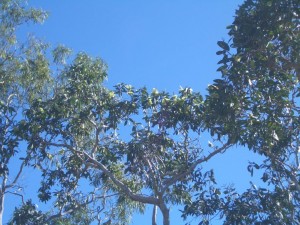 The beach is popular with fishers and campers, four-wheel drivers and trailbikers. Sadly, while some are responsible, others clearly are not. The vehicles rip up the beach and dunes (pity any poor turtles trying to nest) and litter is strewn everywhere. Between us we probably picked up at least half-a-dozen large garbage bags full which Beth and Denise transported home for disposal. Special thanks to Denise for suggesting and checking out this walk for us – we found much to interest, value and enchant.

Jane supplied this comprehensive and professional plant list – even organised into families. Three question marks indicate some uncertainty over identification. The quinine bush might have been P. pubescens, not P.banksii and I (with some audacity, being a non-botanist) assigned species names to the Grass trees and the Pandanus, because they looked right and were in the right place. We are always open to correction!
As usual Nanette provided an impressive list of grasses, native and introduced – the latter are marked with asterisks. She noted that Thatch grass was introduced before 1940 as a fodder plant, for which it proved unsuccessful but then spread widely up and down the coast. Despite being another all too common feral, it was hard not to admire the spectacular flowering of a large clump of Molasses grass at the roadside. More photos below – check out the bulbous Eucalyptus platyphylla trunk! 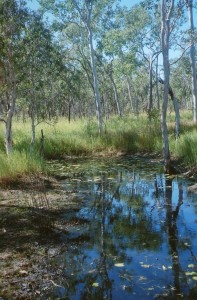 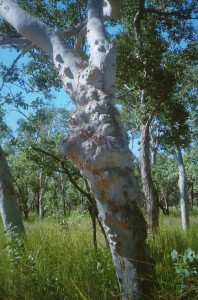