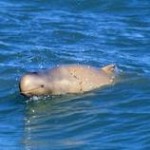 You can hardly have avoided hearing or reading about the proposed Townsville Port expansion, which is part of the massive enlargement of port facilities along the coast (Gladstone and Abbott Point have also received much publicity). While the capital works of the Townsville project pose significant problems, the ongoing operations are expected to be even more damaging. All who care about wildlife and the marine environment need to be concerned.

Actions and impacts of the project include:

These activities will severely impact on the fringing coral reefs and beaches of Magnetic Island and the seagrass beds in Cleveland Bay and much further afield. The saying that  “Hinchinbrook Passage is the true mouth of the Burdekin” reflects the fact that currents flow from the Burdekin at least as far north as Hinchinbrook. The same currents that carry the Burdekin sands and silts will also transport this newly disturbed material. In addition the combination of heavy shipping traffic, noise pollution, siltation, turbidity and smothering of seagrass and corals will place huge stresses on fish nurseries and the populations of dugong, snubfin dolphin (pictured) and turtles – which are already struggling to survive a deadly combination of natural and human-induced changes and stresses.

It is important to note that although the site of the channels, dredging and construction works lie within the GBR World Heritage Area, they are outside the GBR Marine Park –  because port areas were specifically excluded from the Park when its boundaries were declared. However the winds and currents carrying the silt know no such boundaries, nor do the turtles, dugong or dolphins. It is inevitable that ecosystems  and fauna within the Park will be affected.

A shallow water port is entirely unsuitable for this scale of expansion when it will inflict such damage in World Heritage waters – waters which shelter and sustain some of the iconic species and features of the GBR World Heritage Area. We cannot keep piling stress after stress on wildlife and habitats and expect the ecosystems of our Reef to keep on bouncing back. Resilience is not an inexhaustible or invulnerable quality.

Comments and submissions to the Queensland Government closed on 13 May but the project must also be considered by the Federal Dept of Environment (SEWPAC*) under the EPBC Act*, as it is recognised that there will be “significant impact on matters of national environmental significance”. In addition, any impacts on the GBR Marine Park must be assessed by GBRMPA* which is in a position to refuse dredging/dumping permits.

This means you still have time to be heard – letters and comments to the Federal Government and/or to the GBR Marine Park Authority can be received up to Monday 27 May. Addresses are: