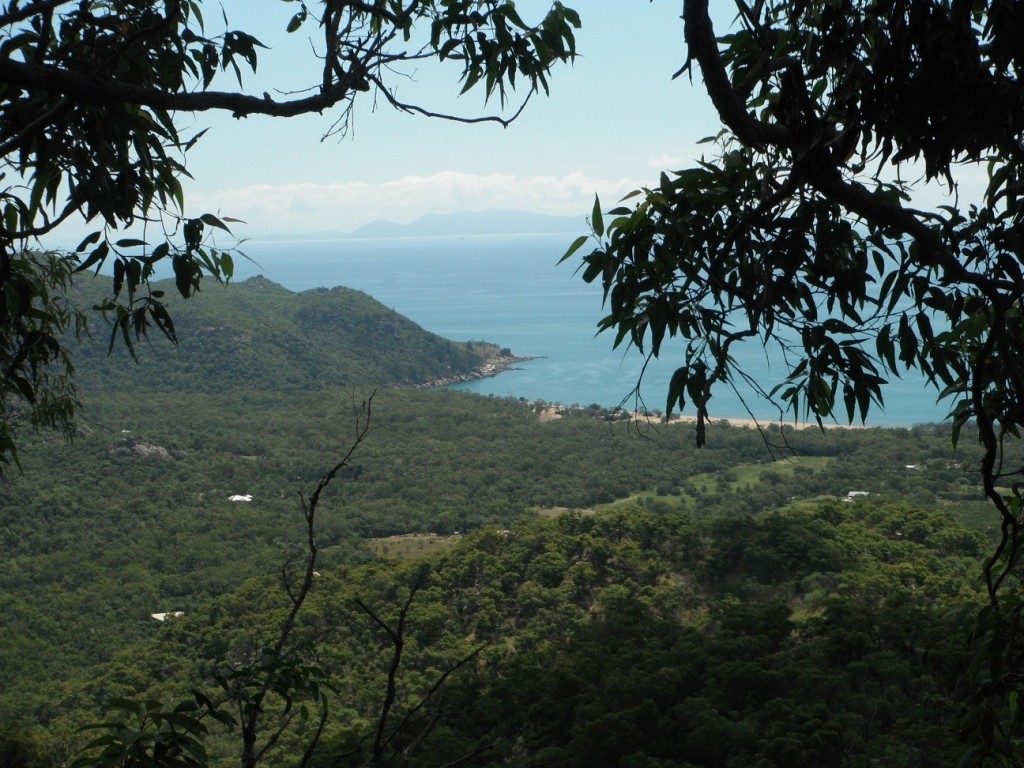 View over Horseshoe Bay from near our lunch-spot. DS photo.

The day was warmer and more humid than anticipated and the track was steeper than I remembered but that did not stop us from enjoying a beautiful day walking the Nelly Bay to Arcadia track through Magnetic Island’s hills. The sign at the start suggest a 2.5 hour completion time but in our well-established tradition we managed to stretch it to six!! In our defence there was much to look at – plants, birds, skinks and butterflies – not to mention the stunning views. And, as the temperature and gradient increased, so did our need for drink stops.

This is such an interesting walk passing through rainforest vegetation alongside the sun-dappled pools of Gustav Creek, to more open eucalypt and acacia woodland as we gained the ridge, then entering savannah grassland dotted with grass trees (Xanthorrhea johnsonii) on the descent. As the track curled around to return us to Arcadia, we found ourselves back among the mixed woodland trying to spot koalas while not tripping over the rocks and roots at our feet. The delectable gelati ice-creams at Arcadia reinvigorated us enough to make the walk along Geoffrey Bay – the beach well shaded by its fringing casuarinas – to connect with the new Gabul walkway and so back to our starting point. 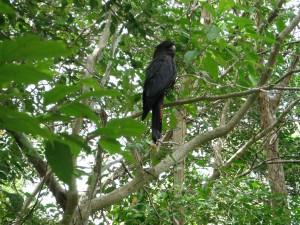 A young red-tailed black declines to erect his crest for the camera! DS photo.

It was lovely to see the bush so green and vibrant. Birders were happy to get good sightings of the Orange-footed scrub fowl at several points along the track, a brief glimpse of an emerald dove, and a close view of a juvenile Red-tailed black cockatoo plaintively calling for Mum. Currawongs gave their joyful calls from the hilltops, fantails and flycatchers darted among the trees and, reaching the saddle, a Brahminy kite and White-bellied sea-eagle soared above Horseshoe Bay.

The plant people were engrossed by the variety of species especially on the long ascent from the end of Mandalay Avenue, where the track began. Beth was excited by a Cupaniopsis wadsworthii or Duckfoot tuckeroo, named for its odd-shaped leaves. Nearby she also noted the shrub Cryptocarya triplinervis, or Three-veined laurel, and the Poison peach (Trema sp.). While  the golden orchids (Dendrobium discolor) on the trees were not in flower, a species of Clerodendrum was displaying its pretty pink and white flowers. A very-large leafed fig, with cauliflorous fruit was almost certainly Ficus hispida or Hairy fig – identified from a wonderful online resource compiled by a local resident Donald Simpson. Check it out here – you will find it easy to use, comprehensive (note that it also includes non-natives) and seems to be continually updated with great images. 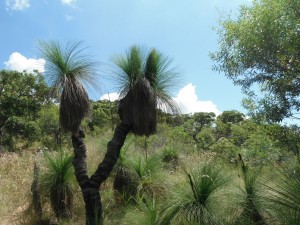 Grass trees were a feature of the savannah as the track descended. Photo DS photo.

Burdekin plums (Pleiogynium timorense) were noticed where the rainforest gave way to the open woodland and along the higher, and drier, ridges we noted Moreton Bay Ash (Corymbia tesselaris), Poplar Gum (Eucalyptus platyphylla) and the Narrow-leafed Ironbark, either E. drepanophylla or E. crebra. Nanette also observed how the Lemon-scented grass was very dominant on the higher part of the hills. The Townsville wattle, Acacia leptostachia, thrives on the island but we were uncertain regarding one specimen that seemed too tall. Possibly it was the similar A. leptocarpa which does form a taller tree but, being undecided, we dubbed it “Acacia dilemma” and left it at that. Later in the year these hillsides will be spangled with the brilliant yellow flowers of the Native kapok (Cochlospermum gillivraei) but their distinctive fluffy seed capsules were here and there on the ground.

It was a special pleasure to welcome 2 island residents, Annie and Catherine, on our walk and hope we will see you again sometime on island or mainland. Our feeling was that we should include at least one Magnetic Island walk in our programme each year. Huge thanks to Denise and Joan for the bird list, Nanette for the grasses, Jane and Beth for other plant information and Denise (again) for the photographs. Click on images to enlarge. 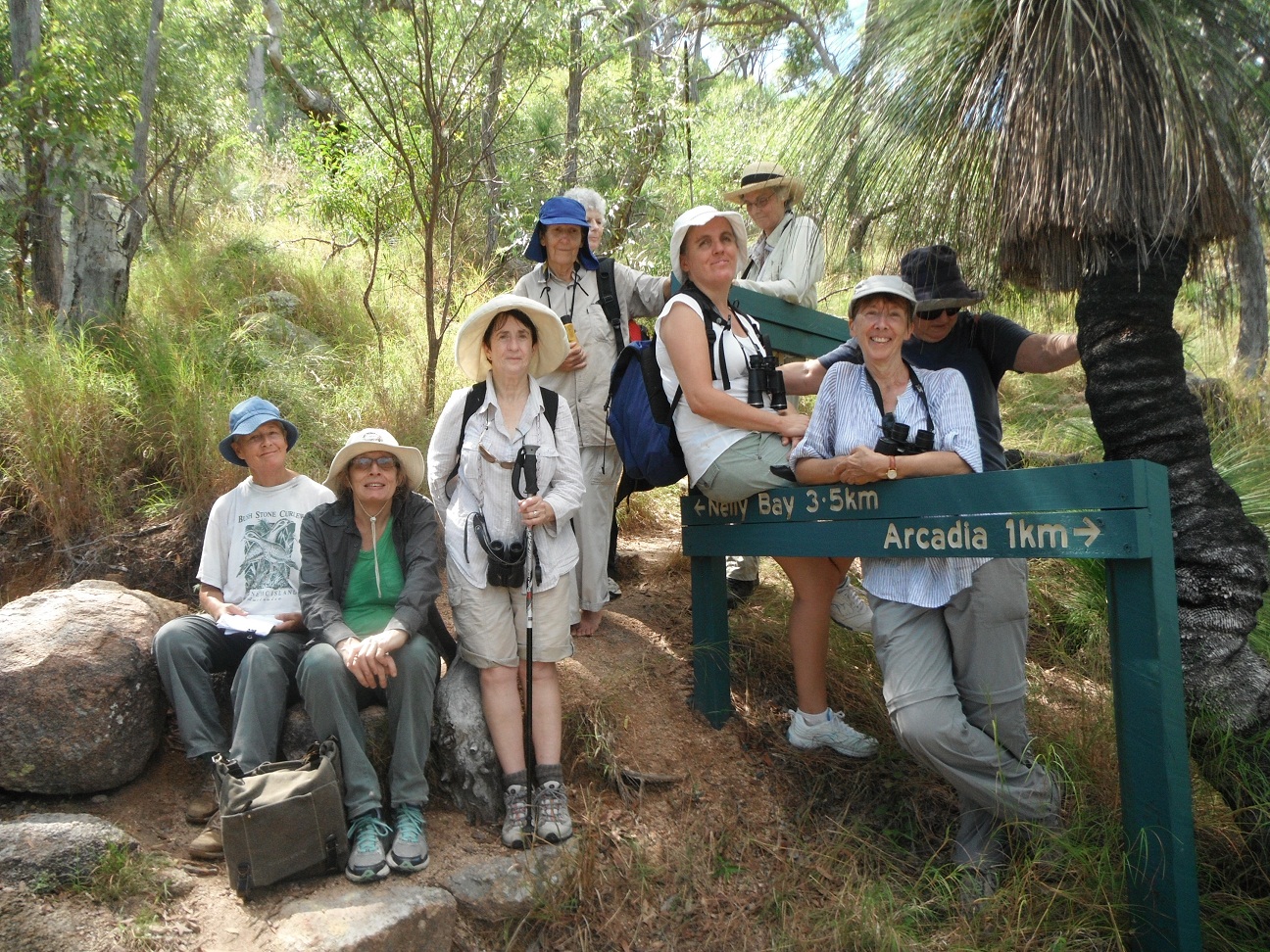 On the home stretch and trying not to look as exhausted as we felt! DS photo (Taken by Annie) 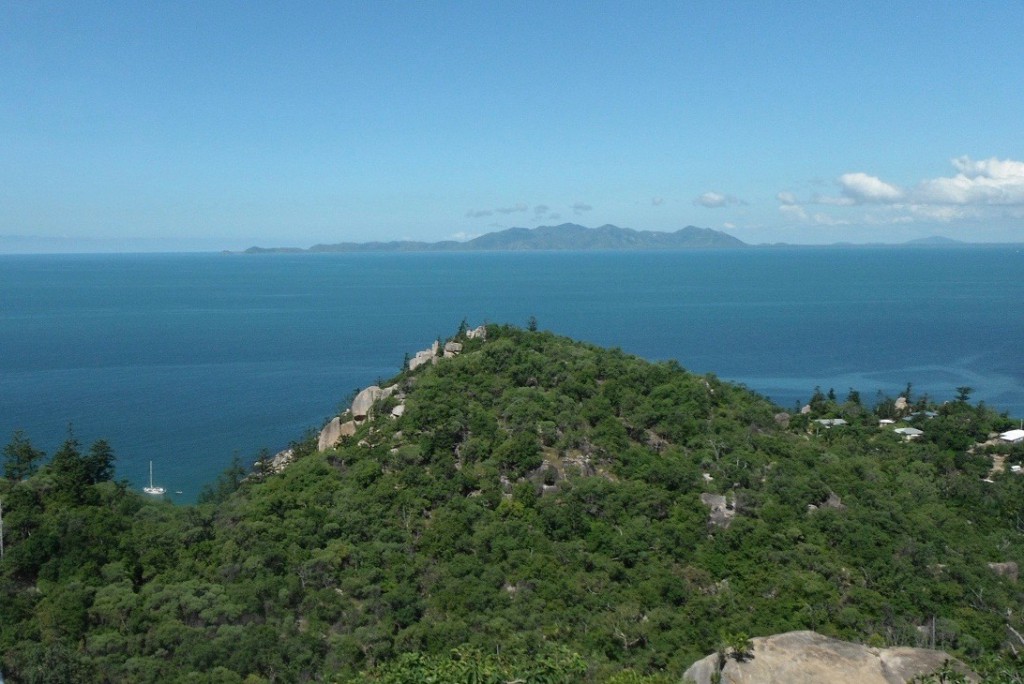