Have you ever seen a quoll? If you have you are very lucky as these little native creatures are nocturnal and shy. The Northern Quoll is a carnivorous marsupial the size of a small cat. At one time quolls were common in the Townsville area but many factors such as habitat destruction and the spread of the Cane Toad have been responsible for its now rare status.

The Quoll Seekers Network (under the auspices of Wildlife Queensland) surveyed areas in and around Alligator Creek last year. Just before the season finished we were delighted to have five individuals photographed on two properties in Toonpan (below is the only day-time photograph) and there has already been one brief sighting on the road this year. Quolls are most active in the cooler weather when they are mating and then bringing up their young so the 2013 season starts soon. During a survey, bait is placed in a closed trap to attract the quolls and keep them within the view of the special heat and movement-sensitive cameras. No animals are trapped or harmed. 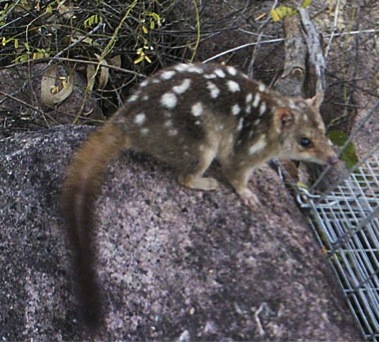 Having had some success south of Townsville we’d love to survey in the north too. Do you want to be involved in the surveys this year? Might you have quolls on your property? Would you like to host a survey? Maybe you’d like to come along and help to set up or collect the cameras? Click here to send us an email.

To learn more about these engaging creatures you can watch WPSQ’s webinar here.

This article contributed by Helen Holmes who has been doing a great job of co-ordinating the activities of QSN in Townsville for several years.