In this heat, “warm welcomes” are probably the last thing anyone wants so let’s wish our newest member, Ron from Charters Towers, a cool but warm-hearted (and somewhat belated) welcome to the Townsville Branch. Joining towards the end of last year, Ron became the 14th new member for 2021.

SUNDAY 20 MARCH: CHANGED PLANS!! Due to high water levels following recent rain, we have had to abandon our plans to explore a section of Alligator Creek downstream from the National Park. We will now visit the unnamed creek on the road out to Cape Cleveland which we first explored in the dry conditions of September 2020.

SUNDAY 27 MARCH: Townsville Branch AGM. Financial members have already been advised of our AGM which we will be holding ‘al fresco’ this year to avoid crowding together indoors when cases of Omicron are still being recorded daily and social distancing remains advisable. Masks are not required but you should feel perfectly comfortable to wear one if you wish. Venue: Palmetum Savannah Shelter, Start time 10am.

SUNDAY 24 APRIL: Field Outing to Woodstock area. To avoid local destinations likely to attract the crowds on a what is a long weekend, we will head south-west along the Flinders highway to the small township of Woodstock and explore the surrounding area. Details to follow closer to date.

SUNDAY 22 MAY: Field Outing t.b.a.  Let us know if you have ideas of walks you would like to do.

SATURDAY 18 JUNE: Suzie Smith Memorial Morning Tea and Walk: The Cassowary Coast-Hinchinbrook Branch is planning a morning tea get-together and walk to celebrate the life and work of the late Suzie Smith on her birthday, Saturday18th June. Invitations will go out in due course to many of Suzie’s friends and close colleagues. If you would like to attend please let us know so we can advise of further details. Our regular outing for that month will be held a week later on 26 June. 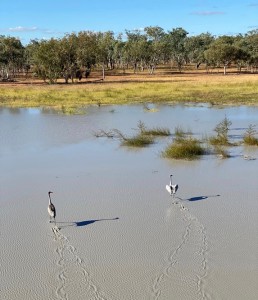 NEW NATIONAL PARK IN NQ: In early February, Queensland’s Environment Minister, Meaghan Scanlon, announced the acquisition of The Lakes pastoral station, located 460 km west of Townsville, as part of the Government’s Protected Areas Strategy 2020-2030. The property, located on the country of the Gudjala People, consists of plains, woodlands, escarpments, creeks, and unique high-altitude lakes of national ecological significance. Its inclusion as part of the Protected Areas Strategy will ensure its biodiversity and ecosystems are protected in perpetuity and managed in line with natural and cultural values. This is the largest acquisition of land since the Protected Areas Strategy was released in October 2020 and will see 35,300 hectares added to Queensland’s protected areas. These are the kinds of purchases the  conservation movement has been fighting for, and waiting for! Read the ABC report with map and extra photos. (Information from Queensland Conservation Council)

FROM FIRE TO FLOODS, how much more can our wildlife take? After the horrific photos and stories arising from the fires of 2019-20, two years later our wildlife have faced the devastation of extreme floods, again on a huge scale. The effects are often tragically similar – animals are either killed outright from drowning (or burning), may be swept by water (or driven by flames) far away from their homes and territories, often unable to return; their food resources are often destroyed and they are exposed to predation from introduced animals, or other wildlife. But, just as in bushfires, some make remarkable escapes or have mechanisms that can help them survive and, if they are lucky, are rescued and rehabilitated by wildlife carers. Read this article in The Conversation, and this message from our parent Society.

COOKING UP THE CORALS?  Up until the heatwave hit us at the end of February –  still continuing as I write, two weeks later – the GBR had been doing pretty well this summer. Average temperatures had not put the corals under stress and there had been no cyclones to inflict major storm damage. But the extreme heat that we have all been feeling on land since then, has also been felt under water. GBRMPA’s  chief scientist, David Wachenfeld, reported this week that almost the entire marine park has been experiencing well above average temperatures in March, which are forecast to continue until the end of the month. In some cases temperatures have been as high as 3°C above the average – and reefs in the Townsville region have been especially hard hit. Inevitably, this means that heat stress is accumulating on the corals and this is being reflected in the pattern of coral bleaching that is being observed. Weather patterns over the next few weeks will be critical. 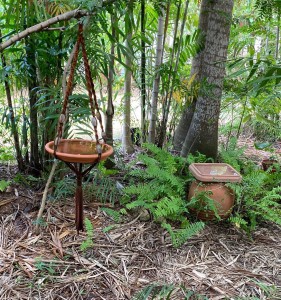 Two of the five birdbaths

FORGET FEEDING – GIVE BIRDS WATER. As far as my garden birds are concerned there’s no such thing as too many birdbaths. Currently I have five. Many years ago I started with just one, sitting on top of a Koppers log, before commandeering a macrame pot-hanger made by one of the girls in primary school. They should make planes out of that wool – it’s had 40 years suspended in all weathers and is as strong as ever (that’s it in the photo). A second hanging bath was a Christmas present (now patched with gaffer tape to stem the leaks) and two more are perched atop makeshift stands (a metal stool and a large upturned earthenware pot). They’ve been visited by everything from tiny finches and honeyeaters, to large species like koels and on at least one occasion by a boobook owl having an early-morning drink before settling down for a snooze after a night’s hunting. Bowerbirds, friarbirds and blue-faced honeyeaters seem to delight in splashing about until there’s little water left. Some mornings the Koppers log bath is found upended on the ground – usually a sign that a possum has stopped for a drink during the night. All five are emptied and filled daily (or twice daily if required) and cleaned once a week. There really is no need to feed Aussie birds and most advice is against it, but water in these super hot days can be a life-saver.

PEACE, BEAUTY, NATURE: Three Townsville Branch members participated in the last pied imperial-pigeon count of the 2021-22 season on19 February, but found that most of the birds had already left on their journey north to New Guinea. However, it certainly wasn’t a wasted day as some useful vegetation studies were carried out and beaches cleaned of washed-up debris. The sight of these beautiful birds winging their way back to the island as the evening sky softens over Hinchinbrook is both a calming and uplifting antidote to the horrors and worries of the human world. 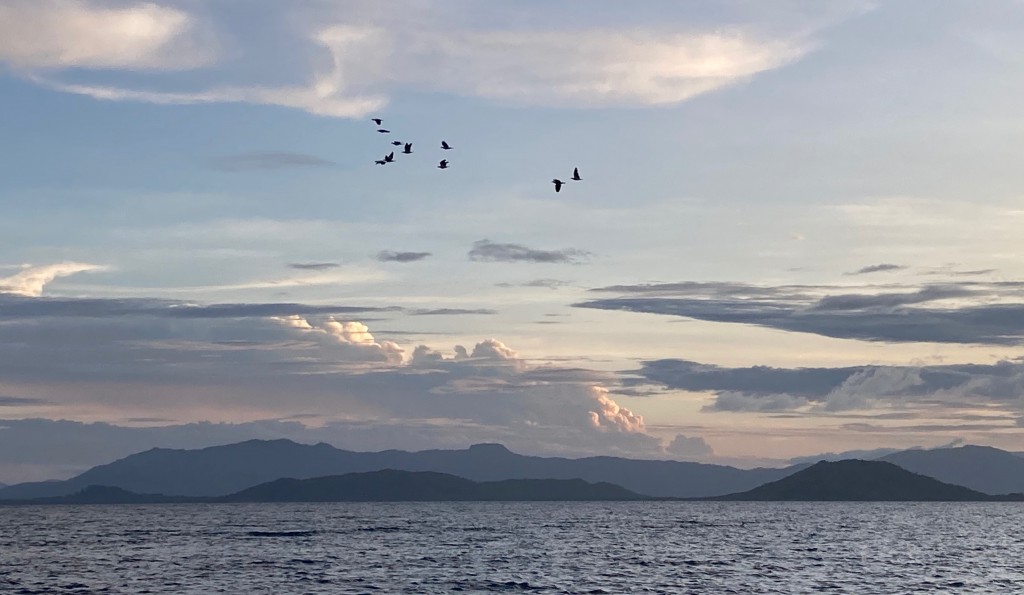