The following President’s Report was presented at the Branch AGM on 27th March.

Membership: The Branch ended the year with 57 members, six more than last year, and included 14 new members, so we are gaining more than we lost. Non-members also often attend our field trips and are very welcome. In June, we were sad to learn that Dr George Heinsohn, life member, driving force and former long-term president of the Branch had suffered a stroke and was in a Canberra nursing home.

Meetings: The AGM was held in March at the NQCC premises when Queensland was almost Covid-free. Seven members attended, with seven proxies and two apologies. The same committee was elected unopposed, with the addition of Pam Cocks as an ordinary committee member. The committee met regularly throughout the year. 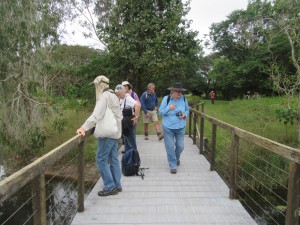 Field Trips: Ten trips were planned and nine eventuated, two of them being joint trips with the Cassowary Coast-Hinchinbrook Branch.There was an average attendance of 10 per trip, the most well-attended being the weekend trip to Mission Beach in May. Our trips were as follows:

Mahogany Glider Project and continuing camera-trapping: In February 2021 the last report for DES and auditing was completed, and we could move on to putting out more cameras on the Mutarnee USL block. This is not part of a grant and is on our own initiative, in cooperation with the Mahogany Glider Recovery Team. We have photographed a number of mahogany gliders, but the area lacks a lot of den trees as well as being quite small, so it probably doesn’t support a large population. Petaurus notatus (aka Kreffts or the glider formerly known as Sugar) are more regularly photographed.

Members attended some of the Mahogany Glider Recovery Team meetings in Tully during the year, either in person or online, and we will continue to liaise with them as we continue our surveys at Mutarnee.

A follow-up meeting between Liz Downes and Dominique Thiriet from WPSQ and TCC staff took place in January 2021 to discuss flying-fox roost management issues. We were pleased to see most of our edits and recommendations relating to their draft interpretive material had been adopted. On the downside, we learned there was still no prospect of Townsville developing a management plan for urban roosts, which is essential if we are to have transparency around Council’s policy and intentions on such an important and often controversial issue. Disappointingly, it became clear that TCC will continue to operate according to the current inadequate state government guidelines rather than adopt best practice measures based on the animals’ known welfare and conservation needs.

The Alligator Creek campground in Bowling Green Bay National Park was suddenly and permanently closed in March 2021 to accommodate an upgrade to the day-use area and carpark. Numerous phone calls, emails and letters to both local and Brisbane QPWS staff achieved no changes to the decision to disallow camping, and the Park, initially due to reopen in July 2021, remains closed at least until the end of May 2022.

MINCA’s successful attempt in June to buy Claude’s Block on Magnetic Island to connect surrounding Nature Refuges to the National Park was supported by Townsville Branch with a $1000 donation, and individual donations from members. 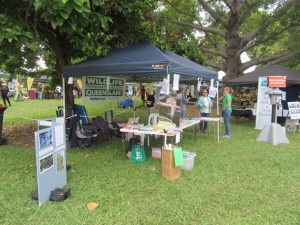 At “Our Townsville” Expo in June.

In June we attended the mammoth “Our Townsville” event hosted by TCC in Anderson Park.  This combined the traditional EcoFiesta with other “expo-style” events, attracting a large crowd and hundreds of stalls and activities. Our stall attracted good interest and prompted a number of interesting conversations.

Twenty-seven permanent posts were published on our blog/website which continued to attract new subscribers.

The year ended sadly with the untimely death of Suzie Smith, founder of the Cassowary Coast-Hinchinbrook Branch, a great friend of our own Branch and many of its members.