So, the blankets are coming off the beds, the hats are going onto heads and we’re not taking quite so much pleasure in sitting in the sun…… welcome to the end of our so-called winter!

Upcoming field trip ~ Sunday August 23rd: Bindal Ridge, Elliott Springs: The Moongun (Quoll) Walking Trail is a bush track which starts from the Wadda Mooli Park in the new development of Elliott Springs and climbs Bindal Ridge with spectacular views from the top. It is quite steep and has some steps (moderate physical fitness is required) so we will take it carefully and slowly.Total distance, up and back, is 4.2km.

Meet at the Wadda Mooli recreation park and playground at 8.30am. We will aim to start walking at 8.45am so we finish the uphill part while it is still cool-ish..

Directions: Drive south on the Bruce Highway to the Elliott Springs turnoff on the right with large sign and traffic lights – this is approx 25 minutes from Townsville CBD, or 10-15 mins from Fairfield shopping centre. To find Wadda Mooli park, follow Elliott Springs Boulevard but, when it turns sharp left (more traffic lights), continue straight ahead through the lights, where the road bears right into Wadda Mooli Parkway. Park as close to the top of the carpark area as you can get and you will see to your left an open area with a picnic shelter and another structure with map and information. The walk starts here.

Previous outings – we have managed to have two outings since Covid-19 restrictions eased. There was a good turnout for our Bushland Beach low tide wander. Read the trip report here. A smaller group had a beautiful trip to Broadwater Forest Park in perfect weather, and the report on that trip is pending (our reporter, also a key member of or mahogany glider team, has been very busy!)

New camera site at Mutarnee: Last month committee members made a preliminary visit to the government land at Mutarnee where we hope to continue our mahogany glider surveys. It certainly looks promising with the right sort of vegetation, including tall trees for gliding and species known to be favoured as a glider food source, including Corymbia (bloodwoods), Melaleuca and Xanthorrhoea (grass trees). We haven’t yet started putting cameras up there but hopefully we will be able to take members into the area for our September field outing.

Flying-fox meeting: Our long drawn out dialogue with Townsville City Council regarding their management of urban flying-fox roosts – most notably the roost in Dan Gleeson Gardens – has drawn some fruit in that we have now arranged a face-to-face meeting to discuss our particular issues of concern and to learn details of Council’s policy and management plans for the roost. With the birthing and pup-rearing season approaching we will be encouraging Council to take a best practice approach and follow the strong Department of Environment advice not to take dispersal actions at times of high vulnerability. Unfortunately, as this advice is not made mandatory, it allows less responsible Councils to ignore it and still claim they are not in breach of legal requirements. Meanwhile in Cairns, despite reports of the first largely well-managed dispersal attempt, there is now concern that the Council will be allowed to continue their actions against these endangered animals (Petaurus conspicillatus) into their birthing season – what the??!

High-flying Gliders: If you want to know about our enchanting gliders, do take a look at the special Glorious Gliders webinar hosted by WPSQ last month. You will meet two members who have spent years learning about and working with gliders. They are Rhonda Green from Griffith University and the WPSQ Scenic Rim branch and Daryl Dickson of the Cassowary Coast and Hinchinbrook Branch. Rhonda has been paying special attention to squirrel gliders – the most vulnerable of the 5 glider species occurring in that area of SEQ because its habitat is mostly in the more open woodland of the coastal lowland which, of course, is heavily impacted by we humans. Daryl of course has been deeply involved with the mahogany glider which likewise clings to the coastal lowlands, where its habitat is also degraded or fragmented by human use. Click the link above to watch all or part of the webinar.

And now we are three: Meanwhile an interesting development in glider research has shown that the sugar glider (Petaurus breviceps), previously regarded as a wide-spread single species, is in fact made up of three genetically and physically distinct species. The one we find on our stretch of the coast and much of eastern  and south-eastern Australia is now described as Petaurus notatus or Krefft’s glider. (This is also the species that has been introduced to Tasmania where it predates on the chicks and young of the endangered swift parrot). Meanwhile Petaurus ariel, or Savanna glider, occurs in woodland savannas of the ‘Top End’ and the “original” P. breviceps (still retaining the common name, sugar glider) is restricted to the forests of SE Queensland and NSW, east of the Divide. Both the latter two species are under considerable threat. Read more in this article in The Conversation. We also have a copy of the original scientific paper for anyone wanting to look further into the research that led to this conclusion – just ask!

Fast-flying pigeons: It is still probably just a little too early to hear the gentle coo-oo of the Pied Imperial-pigeons or catch a glimpse of them by the river, along the Strand or maybe even feeding on palm fruits in your garden – but it won’t be long. These beautiful birds start arriving in early spring and stay for around 6 months. During this time the volunteers involved in the remarkably long-running “PIP counts” out of Cardwell, will make four trips to North Brook Island to count the birds as they fly in to their nesting colony. WPSQ’s Thorsborne Trust supports these counts by funding the cost of the boat for two trips and members from the Casowary Coast & Hinchinbrook Branch and theTownsville Branch are regular participants.  In November last year a young woman, Alexandra Jones, from northern NSW joined the trip to film a short video for her YouTube channel which features nature and conservation topics. It is under 5 minutes so if you want to get a taste of what these trips involve, you can watch it here

National Science Week: GBRMPA has a great series of online events running through National Science Week, from 17th to 21st August. Sessions will include presentations, discussion panels and audience Q & A. Topics will include the Importance of Traditional Knowledge, Actions to address Climate Change, Protecting Biodiversity, and Controlling Crown of Thorns Starfish. You can read more and register here. [Link expired] 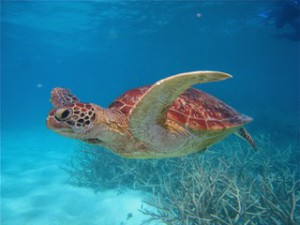 Mixed news for green turtles: Marine turtles are among the most iconic species of the Great Barrier Reef. There is something majestic and mysterious about these large, long-lived creatures, the extraordinary journeys and navigational powers and the way the females so faithfully return again and again to nest on the beaches where they themselves were hatched. And how awe-inspiring is the sight of a large female dragging herself out of the ocean under cover of darkness and struggling up the beach to lay her eggs. But their future is uncertain – along the northern GBR green turtles have been in decline for years. While 90% of their population nests on two islands of northern Cape York,  too few hatchlings are surviving to sustain the  population. GBRMPA is embarking on a major new program of surveys and research to discover how better to manage their future, mitigate the impacts of climate change and other threats, and work together with Traditional Owners. You can read more here.

Our next committee meeting is scheduled for Monday morning 7 September, venue tba. Financial members are welcome to attend but please let us know one week in advance if possible, as venue depends on numbers attending.