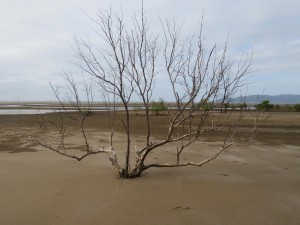 The cancelled March outing to Bushland Beach was revived for June, when Covid restrictions eased and 20 people were allowed for outdoor gatherings. Low tide was conveniently mid-afternoon again and 12 people turned up to wander.

There had been the possibility of seeing waders on the cancelled trip, but even if there had been any around the coast in June they would have found it difficult to feed on the large area of mudflat exposed here at low tide. There were scores of people and unleashed dogs everywhere, despite the sign at the main beach access point explaining that dogs needed to be leashed so waders could feed. As anyone who cares about the safety and well-being of wildlife knows, too many dog owners believe ‘dogs just wanna have fun’ and are happy to let them harass wildlife.

Local resident, Ishara, had been invited to accompany us and, after walking along the sand between the beach scrub and the mangroves, led us out to some pools that remain on the mudflat even at low tide. Their inhabitants were mainly crabs and gastropods. 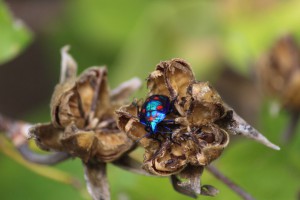 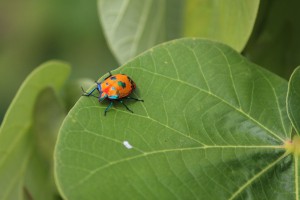 Beautiful harlequin beetles (Tectocoris diopthalmus) were noticed on the Hibiscus tiliaceus. These beetles suck the sap of the hibiscus and a few other native trees, and the females guard the eggs they lay on them. Females are predominantly orange, males are blue and red or orange, nymphs are green. The variable colours have caused many descriptions of them as new species, all thankfully now lumped into a single species. We were familiar with harlequin beetles after finding them on H.tiliaceus at Toomulla beach in 2012. There did not seem to be any birds calling in the mangroves or beach scrub, except for a great bowerbird somewhere among tangled vegetation, and the only birds with wet feet were four white Ibis and a solitary masked lapwing. 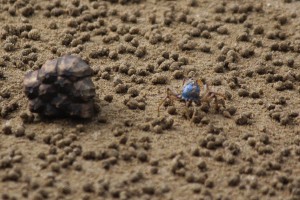 Further north along the beach we were stopped by the mouth of a small mangrove creek. Ishara told us that, like most creeks, it was reputed to have a crocodile but in multiple visits she had never seen one.

There was however a lot of invertebrate action with streams of blue soldier crabs (Mictyris longicarpus) moving along the creek bank. The entire mudflat had seemed to be covered with the little sand/mud pellets which are produced by them and by sand bubbler crabs (Scopimera inflata) as both species systematically remove organic matter from the substrate. As we did not approach them they did not corkscrew themselves into the sand and vanish in seconds, so they continued moving without interruption. 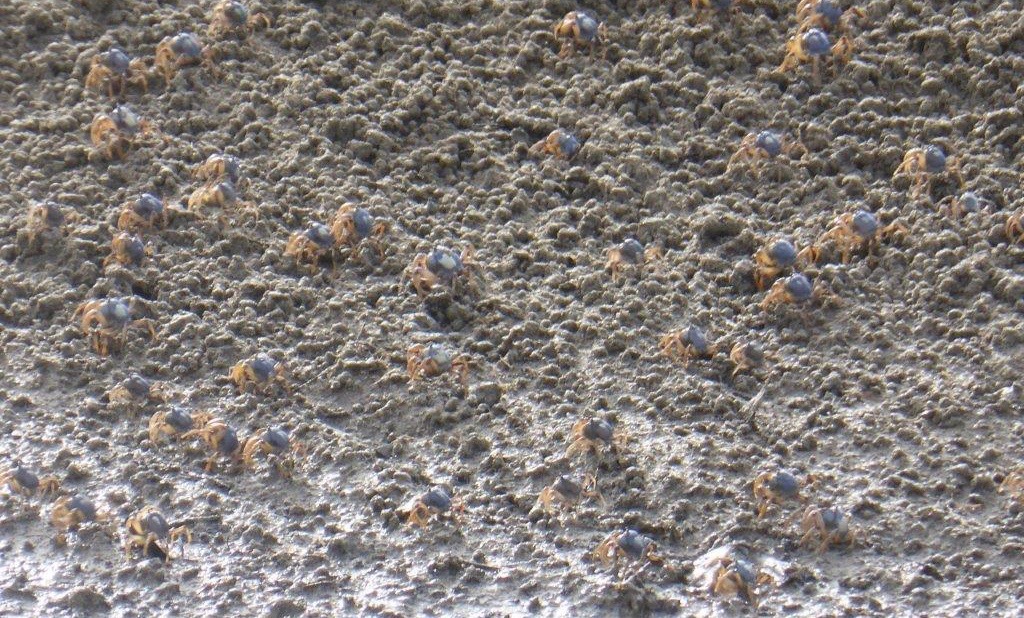 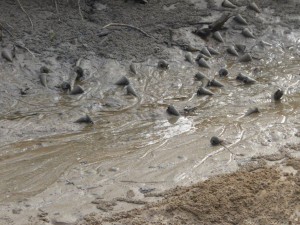 On the muddy sides of the creek, dozens of Telescopium telescopium worked.  While not known for beauty or charisma, they are the most conspicuous mollusc in mangrove areas with a wide Indo-Pacific distribution. They move slowly across the substrate in muddy intertidal areas scraping organic detritus and micro-algae from the surface. To many people they look more like ‘cone shells’ than the real cone shells in the family Conidae, which are venomous. Maybe that deters some people who might otherwise interfere with them.

Returning to our vehicles, the more adventurous walked far out along the exposed sand and (mostly firm) mud beyond the mangroves getting an exhilarating sense  of space – sea, sand and sky – and enjoying the views of the northern side of Many Peaks and Magnetic Island’s west coast. While only a short and fairly mundane outing, it was good to be outside again catching up with friends and looking at what is left of the natural world. It seems so many more people now appreciate nature since lockdown. We can only hope that that appreciation doesn’t wither away again and that more people will act to protect and restore the environment.

Thank you to Ishara for acting as our guide and Margaret,Melissa and Liz for the use of their images. Please click on the images (especially the smaller ones) to enlarge. 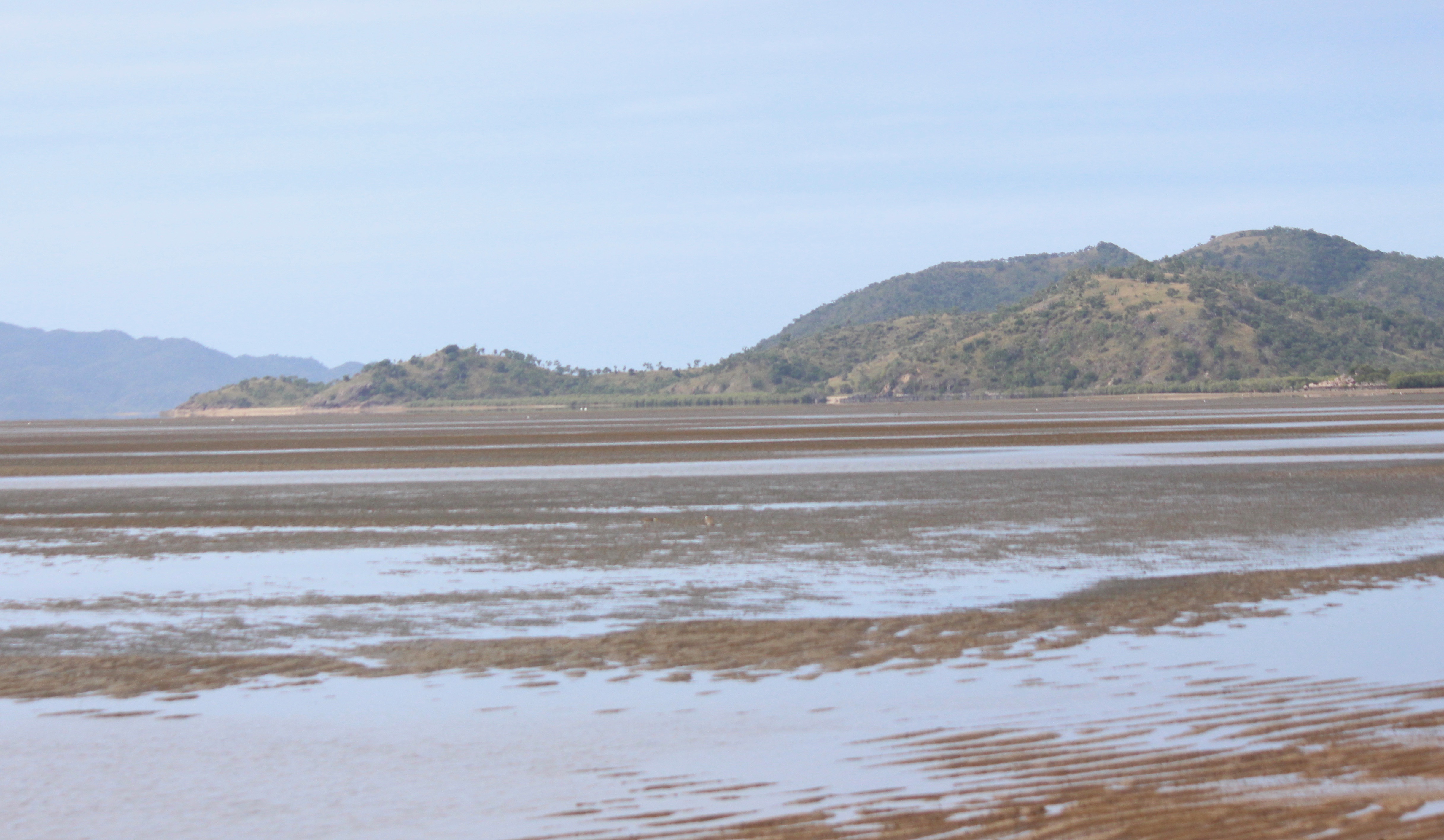 After lockdown, how wonderful is the great outdoors! Photo M. Copnell.