Four great conservationists and conservation scientists – two, sadly, no longer with us – feature in this update: Jon Brodie, Col Limpus, John Sinclair and Aila Keto. They remind us what a legacy their generation (to which some of us also belong) has created. And, if younger generations need inspiration to carry the fight forward, their example must surely provide it.

July field trip – Sunday 26th – Broadwater Forest Park. Part of the Abergowrie Forest, Broadwater lies 47 km north-west of Ingham. Further information regarding how to get there, meeting time and what to take will be posted closer to the date. In the meantime, please let us know if you are interested in coming so we can keep an eye on numbers. Those wishing to camp overnight will need to book beforehand so visit this site for bookings and information.  (NB The Bushland Beach trip report is pending)

Vale Dr Jon Brodie: We mourn the loss of this dedicated and passionate scientist who, at the time of his death last month, was a professorial Fellow at the ARC Centre for Excellence in Coral Reef Studies, JCU. Dr Brodie had been at JCU for 18 years following 11 years with the Water Quality and Management Program team at GRBMPA. A graduate of the University of Sydney, Jon did his Masters at JCU in 1977, following it up with a PhD nearly 40 years later. For the major part of his career Jon was engaged in water quality research and efforts to reduce the pollution that goes into our rivers and flows out to our ocean; he was still actively engaged in research up until his last days. Readers might like to look at an article Jon wrote last September in which he described both his feelings of grief and despair at the future of the Great Barrier Reef and the places where he could still find hope. In mourning him, we should always remember and honour his work and his passion. A fine tribute was published by James Cook University, which you can read here.

Congratulations to Dr Col Limpus who last month was named an Officer of the Order of Australia – the second highest honour awarded by our country – for his ground-breaking research into marine turtles, which has extended over more than 50 years. Dr Limpus’ passion for turtles began as a small child and eventually led him from his high school teaching job into full-time research with QPWS and a lifetime dedicated to learning about these remarkable animals and trying to ensure their long term future around the world. This honour is richly deserved. 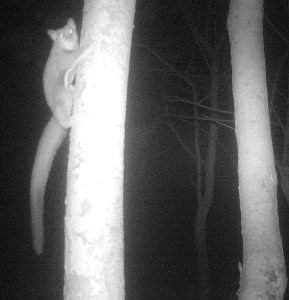 Mahogany Glider Project extended to December: In an earlier post we reported that, owing to COVID-19 restrictions we were winding up our surveys well before the nominated end date of 30 June. However, for unrelated reasons, DES offered to extend the project until December. This will allow the Girringun team to complete their scheduled weed control which had been hampered by access problems, and should allow us to do a few more camera transects on the property, maybe adding to the 25 sites where we have already recorded the presence of Petaurus gracilis. Because of the difficulty of access (4WDs are essential even in the dry) we have been tightly restricted on numbers of helpers – however, should any members with full 4WD vehicles wish to join one of the remaining trips, please let us know. More positively we are hopeful that an opportunity to place cameras on another block of previously unsurveyed land in the same region (this time government owned and with easier access) will make it possible for more members to participate, if they wish.

Endangered “Speccies” dispersal begins in Cairns: Having received federal government approval, a report received last week indicated that the first three days of Spectacled Flying-Fox dispersals from the Cairns CBD had gone better expected. The fact that this was deemed a “controlled action” under the EPBC Act, had received widespread publicity and sparked a lot of community concern and opposition, were probably factors in the high level of care that was taken and the strict observation of rules and conditions. Long-range acoustic devices and lights were used, while 50 observers were stationed around the CBD, connected by radio-phones. Most of the incoming bats flew to a previously used camp 3 km away, while a small number went to a slightly closer creek site. It remains to be seen how long-lasting these results will be and what further dispersals are employed. Most of the females will now be pregnant and will start giving birth in spring – dispersals must stop before then. 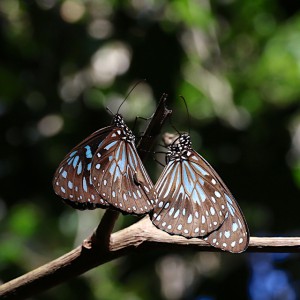 A Tigers’ Lair on Magnetic Island! Friends who have visited Magnetic Island recently have reported that the “Butterfly Forest” at the back of Horseshoe Bay is alive with thousands of overwintering blue tiger butterflies. According to an ABC news story this is the biggest migration since 2015. Some of you may remember that we visited this site the following year and were disappointed to see only a tiny number, so if you want to witness this spectacle my advice is to get over there asap! These butterflies (Tirumala hamata) are among our most beautiful, with dark chocolate wings spattered with aqua blue. Photo attached is by our member Malcolm Tattersall who wrote up a lovely account of his May visit on his Green Path blog.

Bower Bird antics: After decades of having bowerbirds as regular visitors to our Cranbrook garden to feed on berries and palm fruit or have a drink and splash in a birdbath, it was exciting to find that finally one bird was actually building a bower. This was in early May and as the bower took shape it attracted attention from other birds – one was presumably a female as the owner-builder was exhibiting ostentatious display behaviour with his frllly, pink nuchal crest fully opened. Interior and exterior decoration progressed slowly, though our offerings of suitably coloured objects were spurned in favour of his own collection of white pebbles (found who knows where), some broken green glass and a grey clothes peg. Then disaster struck as a rival male began systematically pulling the bower to pieces. Our hero valiantly and repeatedly tried to rebuild but at the time of writing seems to have given up the unequal struggle. All we have now is an untidy pile of sticks, a few pebbles, and a bird who still shows signs of “living in hope”. We shall see what happens when the breeding season gets closer.

Some reading and listening: Since the disastrous 2019-20 bush fires we have heard a lot about the need to work with indigenous land-owners and learn the principles and practice of “cultural burning”. Victor Steffensen’s, Fire Country, is a great place to discover more about this branch of indigenous knowledge – how fire was used to shape but not destroy landscapes and ecosystems, and how traditional owners understood which were the areas where fire would benefit plants, animals and people and which areas should never be burned. Available from Mary Who? Bookshop and good libraries.

And if you have time for listening as well as reading you can’t go past the inaugural John Sinclair Memorial Lecture, delivered by Dr Aila Keto and titled: Mission Critical: Is saving our planet still possible? John Sinclair was the indefatigable leader of the campaign to protect Fraser Island (and much else), an Australian of the Year, and a former president of our Society. Tully-born Aila Keto was the driving force behind the Wet Tropics campaign of the 1980s, and continues her work to protect all of Australia’s rainforest heritage.  Fraser Island, the Wet Tropical Rainforests and the Gondwanan Rainforests of south-east Queensland and NSW all received World Heritage status largely due to the work of these two conservation giants. A condensed version of Aila’s address was broadcast on ABC Radio National’s Big Ideas program in April. You can listen to it here.