This post was included in the September-October 2019 update emailed to members and supporters. It is published, as a separate post, retrospectively as part of the process of bringing our blog up-to-date. 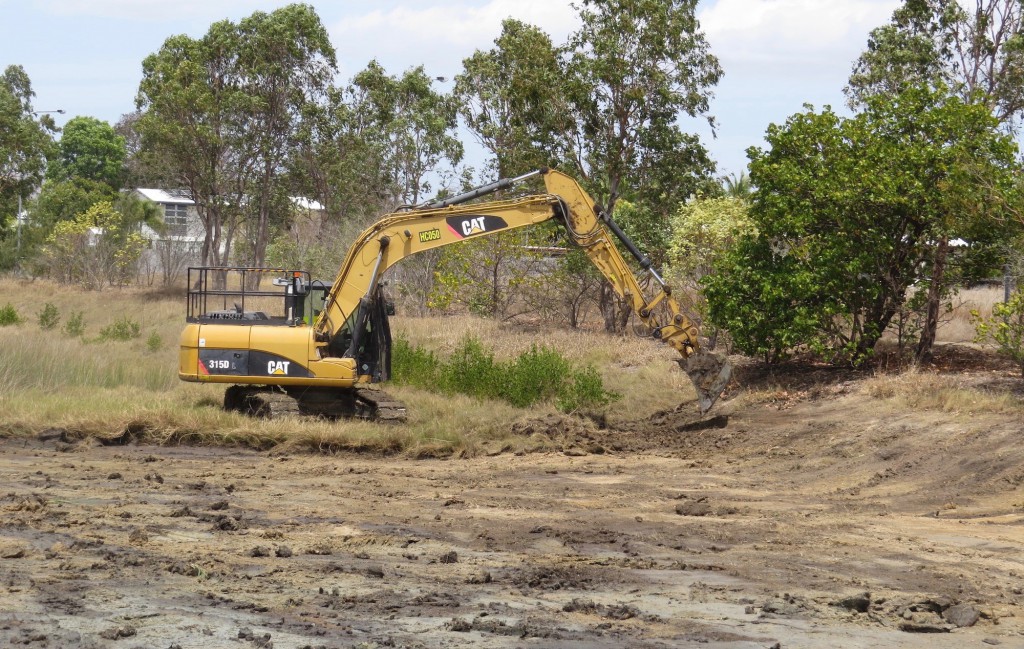 We received an urgent message in early October advising that contractors working for the developers of “The Haven” housing project (adjacent to Mundy Creek) had cleared a stretch of the Creek outside the property boundaries, stripping it of all life (flora and fauna) and risking the loss of many of the trees planted as part of Landcare’s revegetation project.

The work is part of flood mitigation work related to Stage 2 of the housing project and it appeared that TCC approved work which will endanger parts of the Landcare site and its environmental and community values. It is important to note that “The Haven” development was approved on land that was designated in the then Town Plan as a drainage reserve. The drainage reserve was a community asset available to address well-known flooding risks in the Garbutt community.

Landcare and revegetation activities have been occurring at Mundy Creek since 1999. The most recent incarnation is Mundy Creek Landcare which has been active since 2011, and in that time has hosted numerous community events and benefited from the support of over 2000 community volunteers: individuals, community organisations and school groups. The  Landcare group’s interests comprise Mundy Creek, the adjacent native grassland and the old growth Melaleuca woodland that occurred on the former public drainage reserve – the latter was tragically lost when stage one of the project began. The MC Landcare project exists because of community volunteers, and has received support from TCC and State and Federal Governments.

A number of WQ members have taken part in Landcare working bees and clean-ups at the site and the driving force of the Creek’s Landcare group, Bernadette Boscacci gave us a guided tour of the creek, creekbanks and grassland in 2017.

Now they need your help! It seems that the City Council is giving way to the developers’ demands rather than protecting the interests of the community, the environmental values and the dedicated and fruitful work of many volunteers. The Landcare group tells us that no warning or consultation was offered by TCC prior to this latest work and that requests to engage with the community in order to find sensible compromises have been ignored.

Please can you write to the Council telling them that you support the Landcare Group’s position, that you recognise the important restoration work being carried out by volunteers and that this valuable natural asset should not be allowed to suffer as a result of poor decision-making or planning, in the past or currently.

Some suggested addresses are: TCC-Enquiries@townsville.qld.gov.au  (Council is obliged to respond to all mail sent to this address), to the Mayor Jenny Hill or to Division 3 Councillor, Anne-Maree Greaney.

We will endeavour to keep you posted on this issue.