This update was sent by email to members and supporters last October (2019) because of the unavailability of our blog. It is published retrospectively as part of the process of bringing our blog up-to-date.

Upcoming Field Trip Sunday 20th October: As members will know we were obliged to cancel September’ field trip so the visit to our Mahogany Glider project site was put off for a month. Meeting point and time are unchanged – see below.

Meet at 9am at the side of Barrett Road just after it turns off the Bruce Highway approx 70 km north of Townsville. Bring water, hat, food, sunscreen, repellent, etc. Long sleeves & long pants are advised. The trip will probably last until early afternoon. Please advise us if you intend to come so that we can make sure we have everybody with us before proceeding to the site. 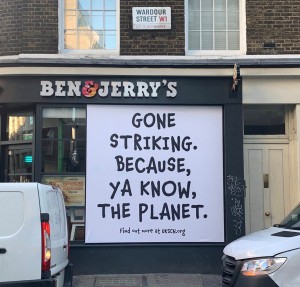 Climate Strike Mark 2: It was good to see several members supporting the School Strike 4 Climate last month. Although organised and inspired by students (themselves both very organised and super inspired) this movement is increasingly being supported by the mainstream population encompassing all ages. In some cities around the world businesses are themselves closing in support and I particularly liked this sign from a London café. This movement is not going away, in fact will only get bigger and the more of us that support these concerned and articulate young people – yes, even if ‘inconvenient’ – the more our ‘leaders’ will be compelled to listen and act. Those who ask “Why can’t they have it on a weekend?” don’t understand the concept of strike action, those who maintain that “children” can’t understand the science seem to have had very little interaction with the science themselves, and those (like our PM) who think children need to be protected from anxiety don’t understand that being lied to actually increases anxiety as does the sense of helplessness generated by having one’s fears ignored.

Back Yard Bird Count 21-27 October: Billed as a great way to connect with our local birds: in the garden, local park, patch of forest, at the beach or wherever. You can count as often as you like over the week, but each count should last for 20 minutes. The data helps BirdLife Australia understand more about the birds that live where we do. Find out more, or register as a counter, here.

And finally . . . your Branch at work

Meeting the Minister: Credit to NQCC’s hard-working Tarquin Moon for arranging a meeting with Environment Minister Leeanne Enoch during the Townsville parliamentary sittings. Our president Denise was part of the delegation and presented concerns about the lack of protection for endangered species habitat and the weaknesses and anomalies existing in both State and Federal legislation. The Minister listened sympathetically and promised to read and respond to the summary of our concerns that was left with her.

Mahogany Gliders need refuges: For some months we have been urging the City Council to propose an upgrade for a small TCC-owned Nature Reserve to the better protected status of Nature Refuge and are now hopeful this may bear fruit. With support from the MG Recovery Team we will be meeting with the Council to advance this – but the ultimate decision will rest with Dept of Environment and Science.

Adani Water Infrastructure Scheme: The period for public comments on Adani’s plan to manage its demands for water was re-opened when it was found that the previous Minister had failed to consider all the submissions received. Our Branch sent a submission emphasising the critical aspects that must be considered before this plan is approved. Our 8th submission this year!