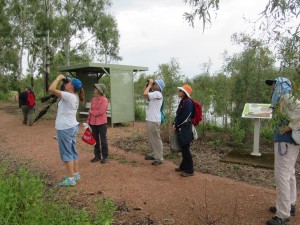 After February’s infamous floods it might seem a bit incongruous that we selected the Ross River Dam and the oddly-named Borrow Pits* for our first outing of the year. Hadn’t we seen more than enough water? Apparently not – despite threatening showers that were still sweeping across the district an eager group turned up equipped with umbrellas and raincoats which happily were barely needed.

It was disappointing to find that the usual access to the Dam remained closed with repairs to structure and riverbank below the walls still in progress. However, that gave us more time to complete the circuit around the borrow pits on the opposite side of the road which now appeared as a large impressive lake. Unsurprisingly, with so much of North Queensland transformed into new and enticing wetlands, birds were almost absent from the water but there were still plenty around the banks, in the surrounding bush and overhead. Our list below includes five raptor species, three species of heron and both sacred and forest kingfishers which conveniently perched together on the same branch overhanging the water.

As we approached the point where the track bends around the far end of the water the “ee-chew” calls of a crested hawk signalled where it was perched in full sight in a nearby tree (later discovered to have mate and youngster nearby). Further on a flock of red-tailed black cockatoos were almost oblivious to our presence as they foraged on the ground in deep shade. 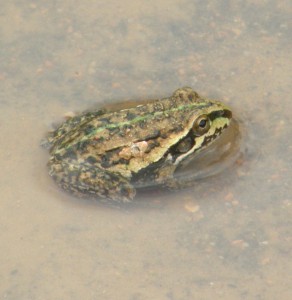 Quite a number of years ago work by Green Corps and the City Council constructed 2 small bridges and several viewing platforms with interpretive signs making the site an excellent educational resource and providing us with some good places to pause in our slow progress around the water. While there were plenty of cane toadlets hopping across our path Margrit’s sharp eyes (and camera) caught two interesting native frogs – one was the green-striped burrowing frog (Cyclorana alboguttata) (pictured above). The other was later identified as the ornate burrowing frog (Platyplectrum ornatum) which had presumably only recently developed from the tadpole stage as it was still very tiny. (Thanks to Greg Calvert and the Qld Museum for assistance with these IDs) 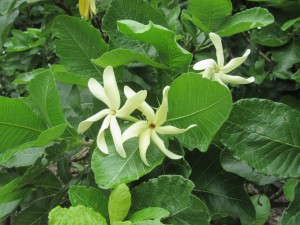 Green Corps (or somebody) had evidently done a fair amount of native plantings in past years, though weeds still abounded. There were many paperbarks around the water, Melaleuca leucadendra (broader leaves) and M. fluviatilis (narrower leaves). Beth noticed a fallen tree of Pipturus argenteus (native mulberry) still with plenty of fruit which some of us sampled. They look like tiny, soft, white strawberries with not a lot of flavour, but sweet and pleasant enough, though you’d need a lot to get a decent feed! The cheese fruit (Morinda citrifolia) was in flower as was the native gardenia (Larsenaikia ochreata – pictured above) with a sweet gardenia-like perfume.

After our walk Alison and I took a short drive further along the road beside the dam where we saw two bustards, a flock of galahs and, disturbingly, a lone pelican sitting in the grass below the slope of the dam wall. We pulled over and, while I was reaching for my phone to call the wildlife carers, another couple pulled up to say they had already contacted Fight-4-Flight’s Deb Carter who was on her way. Sadly, our follow-up enquiries revealed that, despite expert care and veterinary investigation, the injuries were too severe and the bird was euthanased – but at least was given a gentler ending than if she had been abandoned by the roadside.

* The borrow pits were so-named because they were created when soil was excavated (“borrowed”) for construction of dam walls.