This update was sent by email to members and supporters last February (2019) because of the unavailability of our blog. It is published retrospectively as part of the process of bringing our blog up-to-date.

New Year greetings to all and welcome to our February 2019 update.

The February Floods – how did you go? Whether it was a once in a 100, 500 or possibly even 2000 year event(Townsville Bulletin7/2/19), it was certainly BIG and we know some of our members and supporters will have suffered losses. If you are among them and if there are any little ways that our group might be able to help out, please let us know. From a wildlife perspective – and we probably all saw the photo oft he freshwater croc that turned up in a Mundingburra driveway – if anyone noticed unusual wildlife or wildlife behaviour during this period, let us know. Could be worth documenting?

Upcoming events: Our AGM will be held on Sunday 31 March, 9.30am, at the NQCC offices. Copies of the President’s report and financial report for 2018, and a proxy form for those unable to attend, will be circulated beforehand. Our February field trip on Sunday 24th February will visit our now internationally famous Ross River Dam and nearby Borrow Pits, meeting at 9.00am at the carpark below the dam.

Vale John Sinclair AO,13 July 1939-­‐3 February 2019: One of the greats of Australian conservation, and a former President, Councillor and long-­term member of WPSQ passed away in early February. John Sinclair was also a former Vice-President of the Australian Conservation Foundation and of course the founder and President of FIDO, the Fraser Island Defenders Organisation. His dogged (serendipitous pun) leadership of FIDO and its campaign to protect K’gari (Fraser Island) from the ravages of logging and sand-mining, followed by the island’s eventual World Heritage listing in1992, is one of the great Australian conservation stories.

Taking the southern black-­‐throated finch seriously: We so often accuse our political leaders of doing too little too late, often with justification. But Environment Minister Leeanne Enoch’s decision to appoint an expert, independent panel to review the Adani Corporation’s finch management plan is welcome. The southern species of the black-throated finch is one of Australia’s most endangered birds and, despite recent completely unsubstantiated claims that it can be found “all over the place”, the birds have lost so much habitat to tree-­clearing that they are now restricted to a few scattered sites around Townsville and in the Galilee Basin.The latter hosts by far the best habitat and the most significant remaining BTF population but the Adani mine would destroy a large area of this prime habitat, pushing the bird even closer to the brink. If we are not to consign this bird to extinction there is an absolute obligation to subject Adani’s reportedly flawed management plan to rigorous and expert scrutiny.

Taking our National Parks seriously: Late last year we reported that the Queensland Minister for Tourism, Kate Jones, was calling for expressions of interest from private companies to acquire 30 to 60 year leases over areas of public land within our National Parks–including Hinchinbrook Island. We have subsequently received letters from Ministers Kate Jones (Tourism) and Leeanne Enoch (Environment and Science) both of which sadly failed to address our most serious concerns and spoke only in glowing terms of the values and benefits of “eco-­‐tourism”. Well yes, Ministers, we do know what eco-­‐tourism is and how, when the concept is not abused, it can bring many recreational, economic and educational opportunities. What we object to is allowing private operators to be given special rights and access to establish facilities and structures not nearby but actually within these very special public lands that have been set aside for the conservation of biodiversity and of our natural and cultural heritage. Remember that, out of all the states, Queensland has the smallest percentage of land protected for conservation. This fight is not going away. 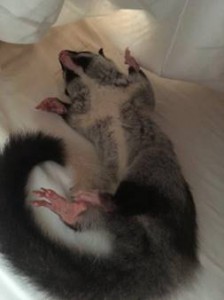 Sleeping the rain away: A delightful post from Daryl Dickson, President of the Cassowary Coast & Hinchinbrook Branch and gifted wildlife artist, came with this photo attached. On top of all their other activities Daryl and Geoff are dedicated and compassionate wildlife carers and the photo features a recently released striped possum which had dropped by for a bit of shut-­eye during the February storms and rains. Daryl wrote:Our released striped possum has been popping in during the downpours…she doesn’t seem to notice the storms or rain…but I think it has made food a little scarce. She is the funniest of creatures…once she knows she has “people” to keep watch, she flips onto her back and sleeps… then heads back out into his forest… Awwwww!

School Strikes for Climate, Friday March 15th: The global movement by school students to speak out on climate change is building momentum. These young people are showing incredible spirit and initiative and now invite the adults to join them.

Tasmania burning: While North Queensland was drenched with record amounts of rain, Tasmania was burning. This powerful article in The Guardian by Tasmanian author Richard Flanagan, makes compelling reading.

Losing the little things:Two recent international studies have drawn attention to the rapid decline in the population of some of our smallest creatures – terrestrial invertebrates (insects, spiders etc). Read more here.

Saving Reef HQ: With hard work, generosity and a mountain of salt our renowned Aquarium was saved from freshwater disaster. Read more here.