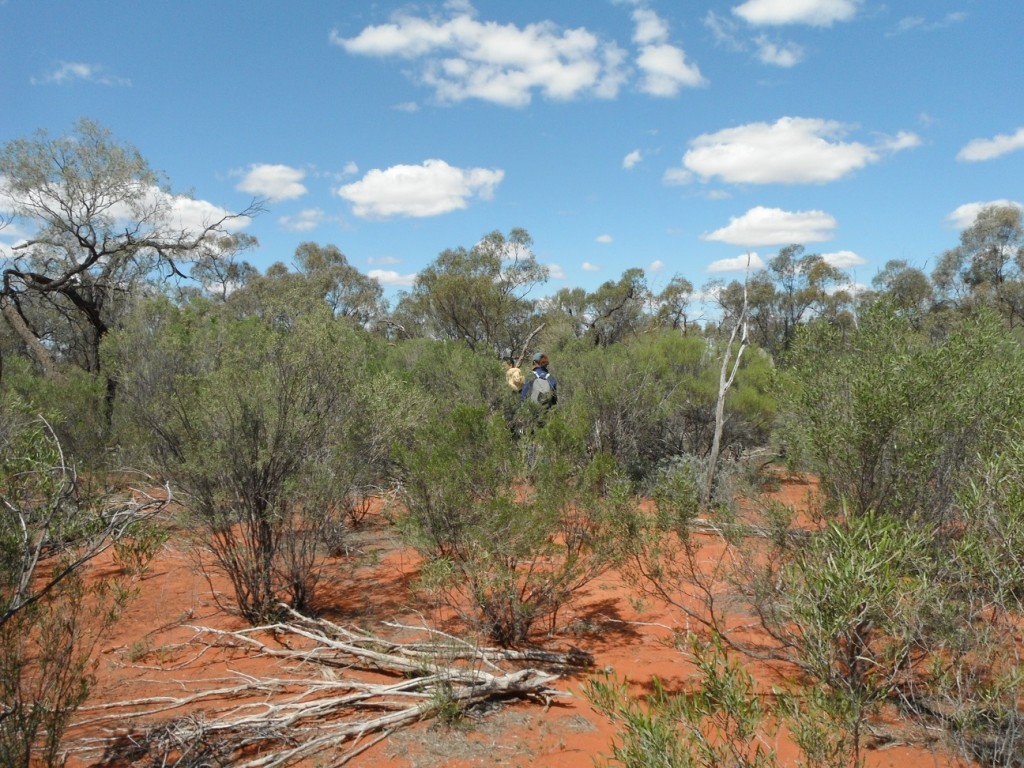 This account was contributed by our vice-president Denise who joined the first Bilby Tracks venture last September.  All photographs were provided by Denise, except for Raking the Sand, courtesy of STBF.

When the Save The Bilby Fund called for expressions of interest in a ‘citizen science’ trip to the bilby enclosure in Currawinya National Park in SW Queensland I rushed to respond. This was to be a pilot program in which the wider community would work with researchers and rangers on surveys to help establish that the bilby enclosure was safe before releasing more captive-bred bilbies into the park. The initial bilby release behind the predator-proof fence in 2003 was followed by an increase in their numbers. But in 2011 something happened to the fence (there are different explanations)with the result that cats got inside and bilby numbers declined. Work has since been done on the fence and on removal of cats which are notoriously difficult to trap. 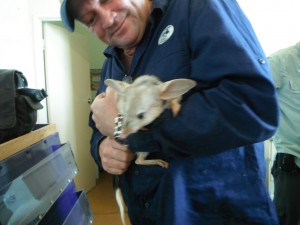 Bilby Sarah – or was it Susan? – with handler Kev Bradley.

Early on a Friday morning in Brisbane, 13 people from various backgrounds but united as bilby enthusiasts, met with Colleen, the organiser, to board the Blue Bus driven by Geoff. As well as being the cook, Geoff happened to be the best and most helpful bus driver, possibly on the planet. We had a long drive to get to Charleville to set up our tents before dark at the Evening Star caravan park just outside town. The next day was National Bilby Day. We drove into town and after a quick exploration of the CBD, where most businesses had bilby posters, photos etc decorating their windows, we visted the Charleville Bilby Experience, a centre set up by the STBF in the old railway station.  After a briefing by the CEO, Kev Bradley, he brought out Sarah – or was it Susan? He couldn’t remember her name – one of the bilbies from the captive breeding program, so we could see up close how beautiful a bilby is. The main part of the Centre was offering talks and videos to the public. The place was packed.

In the nocturnal house setting we could watch several bilbies moving around and digging in the low light conditions. Feeding captive bilbies so they are healthy enough to breed without them getting fat requires watching their diet and not letting them eat too many mealworms. After that we went around the corner to the historic pub for lunch  (it seems all pubs in SW Queensland are ‘historic’) and then a free afternoon back at the caravan park which I spent wandering around the mulga behind our tents looking for birds (only two Apostle birds) and hoping I wouldn’t get lost.

The Fur Ball was on in Charleville that night to raise funds for STBF. A handful of our group went and had a great time, while the rest of us wandered around with head torches looking for wildlife. As usual with head torches, spiders’ eyeshine reflected from the ground everywhere, but the only other signs of life were beetles flying around before landing and quickly burrowing out of sight, calls of one species of frog around the dam, and one small frog found under some vegetation. This was quickly identified as the chubby toadlet  Uperoleia rugosa, using the JCU frog app which every frogger should have. 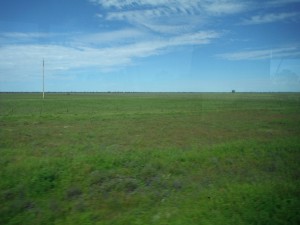 Green, green grass seen from the road to Eulo.

Next morning Craig, owner of the cattle property housing the van park, gave us a quick tour of some areas, showing us parts that had been damaged by overgrazing and what he was doing to rehabilitate them. There had been much unseasonal and welcome rain throughout the south-west so there was green grass and lots of macropods: red kangaroos mostly, but also some common wallaroos. Unfortunately they still have to compete with herds of introduced cattle and sheep, despite the well-documented damage done to most of Australia’s environment by hard-footed herbivores.

Beside a creek Craig showed us some Aboriginal stone tools. Every time it rains, more tools are exposed and can be found by just walking around on the bank – we found a dozen or more. Countless generations must have camped and worked there before being dispossessed by Europeans and their herds, a sobering reminder of the origins of this country.

The rain had closed the road to Hungerford where we were supposed to camp close to Currawinya, so the only option was at Eulo, 100km from the bilby fence, and bus in every day. Driving to Eulo there was so much greenery and water lying that much of the country looked like a coastal golf course instead of dry mulga. Eulo is famous for lizard races, a large statue of Diprotodon and the Eulo Queen, after whom the pub was named. We put up our tents behind the pub, where the advertised “grassy sites” was a large area of red dirt with bobcat, trucks and construction materials stored in the middle. No-one cared. Monday we’d get to the bilby fence which was what we were there for.

From Eulo to Currawinya the road was only partly sealed, with red wet dirt in between, but the bus had no problems. Arriving at the fence there was another briefing and Jean-Marc Hero from Griffith University explained about the fixed transect lines that were to be surveyed for signs of bilbies, cats and rabbits, and the sand traps. We divided into groups, some to go in utes along the dirt track that runs along inside the fence to check sand-traps made the previous day, and others to walk the transect lines. 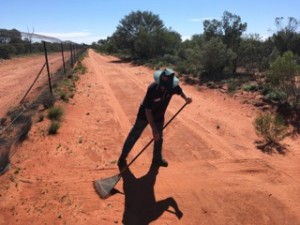 Raking the sand. Photo from Save the Bilby Fund.

Sand-traps are made by raking the soft dirt from one side of the track to the other at many places, so that fresh footprints or any scats can be identified. After checking, the patches are re-raked ready for the next morning. My group was to go with two postgrad students along the transects. The first student and a scribe walked slowly along the 50m line between two star pickets looking for bilby prints or scats. We followed looking for signs of cats or rabbits and rabbit latrines, and measuring their distance from the transect line, noting if they were fresh. We walked transect after transect, fortunately led by people who knew where they were going and were consulting a GPS, because the sameness of mulga makes it easy to get lost. Jean-Marc was interested in what was happening with the rabbits as their numbers seemed to be declining; probably the cats killed many rabbits as well as bilbies. All the rabbit latrines along the transects were old; no prints of bilby, cat or rabbit were seen but there were fresh echidna scats along many transects so it wasn’t a totally lifeless scene.

The sand-traps did show fresh cat prints along with bird and reptile prints but no signs of bilbies. Someone found an old bilby scat but, as they have been shown to take ages to deteriorate, even that didn’t cause much optimism. By then it was late afternoon and time for the long drive back to Eulo.

It rained a little overnight but, heading back to Currawinya next morning, it was clear there had been heavier falls along the way and unsealed parts of the road were very soft. When we finally got bogged it didn’t take long, after digging out the wheels, for the two Bilby Fund 4WDs to drag us out and we arrived at the fence without further problems.

While others checked sand-traps, a group of us searched a large strip of land between a track and a small lake for cat signs as prints had been found in the vicinity the day before. It was thought possible the cat lived in the area, where it had access to a variety of prey in the mulga and by the lake, and that knowing where it did most of its hunting might make it easier to trap, or to find with the trackers next time. Some of the group found many cat prints concentrated in a small area; several rabbit warrens with fresh tracks and scat were nearby. Then we returned to help with the remaining sand-traps, as well as checking the soft dirt on the edges of the track between the raked traps. 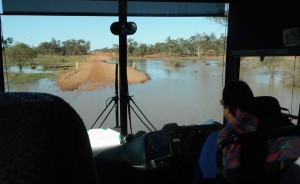 Challenges of the road to Currawinya

It had been hot and sunny all day but as we drove back towards Eulo it was raining and with water lying everywhere including on many patches of road. The bus successfully skirted the bog of the morning, but got slower as the mud got deeper. At one point the wheels started churning and it looked like the big bog was about to happen but we hit slightly firmer ground and slogged on until finally reaching the bitumen. Geoff said it was the only time on the trip when there was silence behind him instead of everyone talking at once. Despite having the road already torn up by the bus, the 4WDs behind us made it back to Eulo totally coated in red mud the way city 4WD owners dream about. The road from Eulo to Currawinya had already been closed when we drove it and looked to stay closed for days.

Fortunately it had stopped raining but the campsite was a mix of red mud and water and some tents standing in puddles had to be moved. Geoff’s kitchen trailer was sitting in water and he whipped up our evening meal while wading, and people helped push it to slightly higher ground next morning when it was drier.

It was impossible to return to the bilby enclosure so we spent the remaining days being tourists. Restricted to bitumen roads, we explored Thargomindah, Lake Bindigolly, Yowah with its hot baths from the artesian bore, and nearby opal mines. A stop at St George on the way back to Brisbane gave us a chance for a boat ride on the Balonne River.

Despite the rain and the limited time in the bilby enclosure it was a fascinating trip to an area I’d not seen before. The STBF is hoping to run four citizen science trips in 2017 and definitely hoping for no unseasonal rain. It is believed there are only two cats left inside the fence and that these will be removed soon and the next lot of captive-reared bilbies can be released. Camping at Hungerford will mean much shorter drives into the park and the chance to be inside the fence at night for spotlighting. 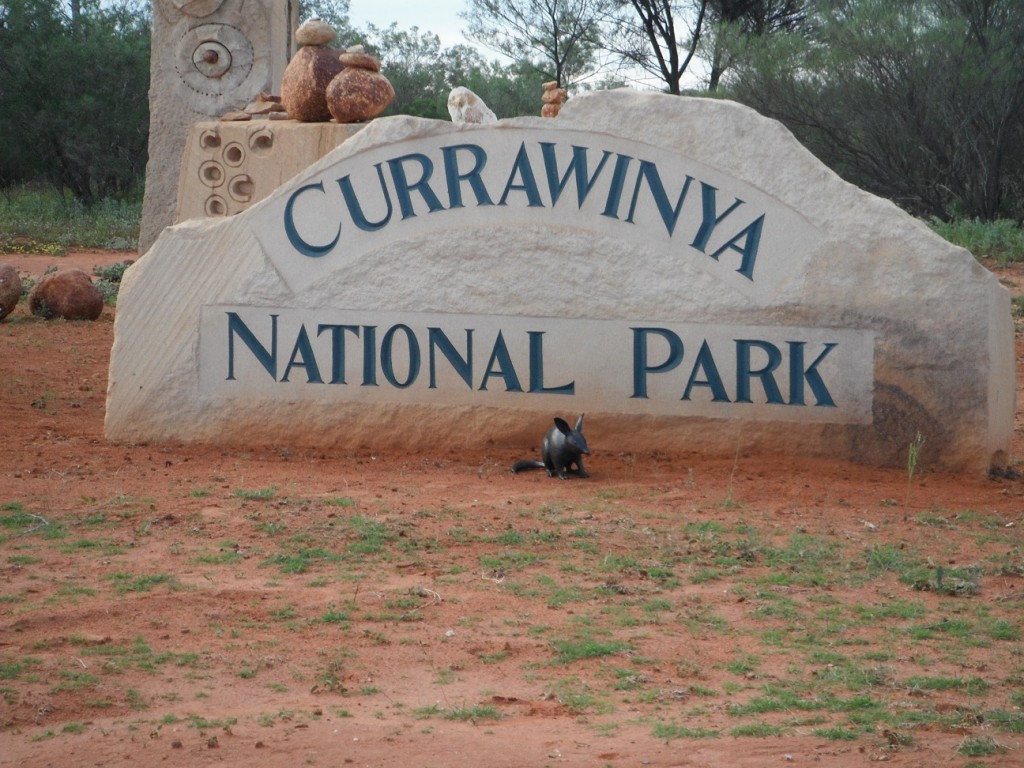 Currawinya National Park sign – with its most iconic marsupial!