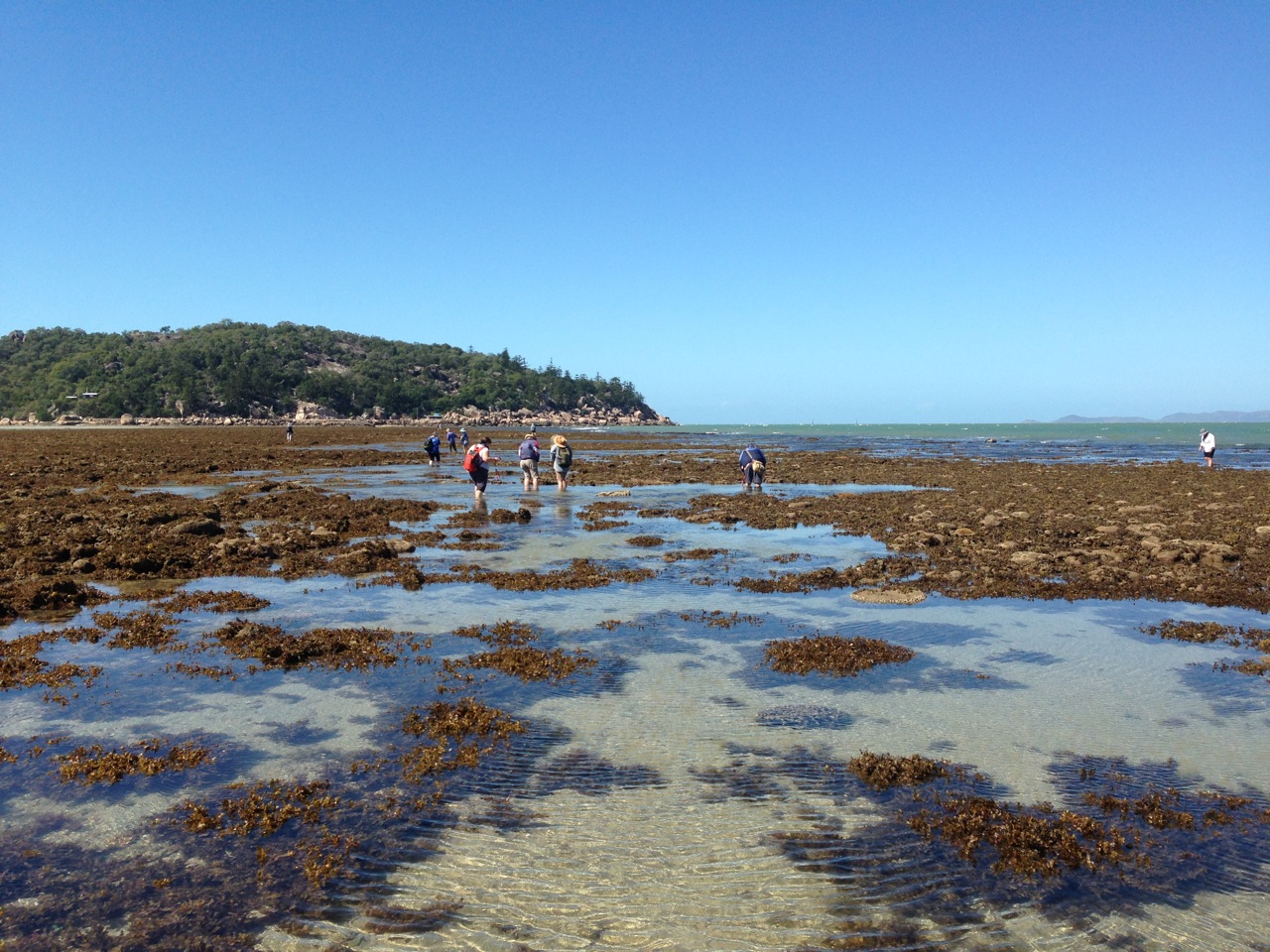 Wow! What a great day we had for our low tide walk at Geoffrey Bay in August. Better promotion of the event in the Townsville Bulletin paid off with at least double our usual number of participants, including several holiday-makers. It was quite exciting to see the growing number who gathered around the “Wildlife Queensland” sign as we disembarked from the ferry, eventually forming a straggly line to walk over the hill to Geoffrey Bay. Most chose to take the scenic route along the bush track that climbs up the side of the hill above the road, while others followed the only slightly less scenic Gabul walkway. At the beach we found another group waiting for us, making a total of nearly 30. We were fortunate to have three expert guides on hand  – Jackie, John and Lynne – to interpret what we saw and inspire us with their enthusiasm. 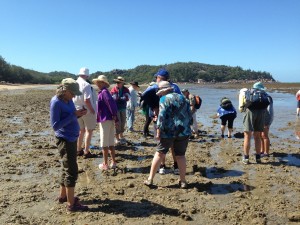 After a quick lunch under the shade of the casuarinas we began our foray across the reef flat, well-exposed by this very low tide. Examining the microatolls – corals which have died at the centre but continue to grow around the perimeter – John pointed out that that in these intertidal zones many corals are living close to their limits of viability. He reminded us of the cyclical nature of reef development and cautioned us not to make hasty assumptions on the basis of what we saw in this inshore zone, explaining that corals may die off in one area where a few metres away others are thriving and new ones developing. 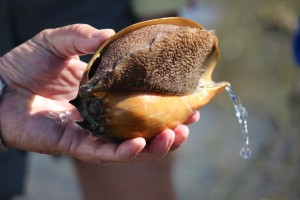 Like all living organisms corals will die of ‘natural causes’ and not necessarily as a result of human activity. Many might assume that the area we were exploring was “dead” or dying, whereas a close examination showed a myriad of healthy living organisms. On the other hand some who had grown up exploring these beaches and reefs were well aware of disturbing changes. One example – a bailer shell, with its animal in residence, looked impressive to most of us but was only a fraction the size of those once common at this site.

The further out from the shore the healthier and more abundant the corals became – even if walking became more challenging! Other forms of life also became more diverse. Among some of the treasures found were an eel, several holothurians, a delightful pink sea urchin, an octopus, an elegant flatworm and at least two kinds of clam. Eventually a move was made to the eastern section of the bay where coral gave way to sand and patches of seagrass. Here the hunt was on for the elusive brachiopods, Lingula anatina. 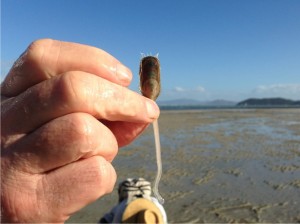 What were we looking for exactly? Three tiny holes in a line in the sand, which would disappear if a shadow fell on them! Fortunately John knew exactly where to look and what to look for and, after a few minutes of furious digging, held up one of these “living fossils”. You can read more about this particular species on this Natural History Museum web page. Although the claim that the animal has remained largely unchanged for millions of years is now being debated, it is nonetheless a remarkable creature and I found it quite moving to be sharing this beautiful beach with such a truly ancient survivor. Long may those three little holes bear witness to their continued existence, even if most of us remain oblivious.

We were almost overwhelmed with photographs (click to enlarge), many of them capturing species which Jackie and John helped to identify – great work both of you. Please see the separate post, Marine treasures, which has a complete list and more photos! Just for once birds barely get a mention but we did share the beach with some terns and at least one grey reef heron, while an osprey flew, largely unnoticed, over our heads. And it just wouldn’t be Magnetic Island without the curlews!

Do take the time to view the complete folder of photos from Melissa here (choose “play slide show” for best effect) – and if you want to do more than just look, you can view the key attached to the September email update or contact us for a copy. Don’t forget to look for those brachiopod holes in the last photo but one! A huge thank-you to our photographers and guides alike. 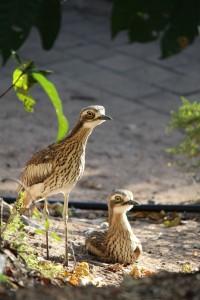 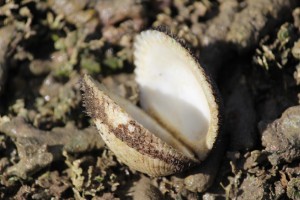 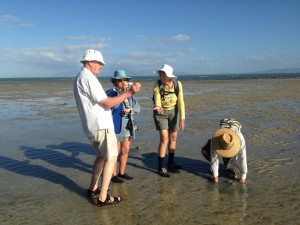