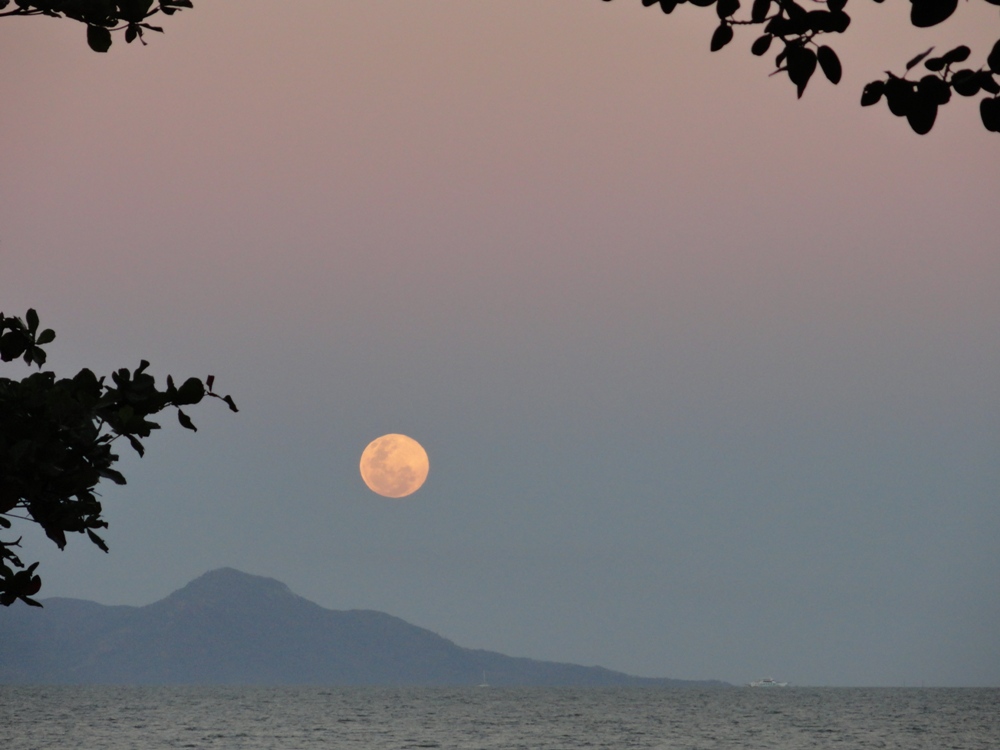 A gathering of twelve rugged-up adults and two children met at Pallarenda for a casual picnic, timed to coincide with the rising of the super full moon on 23 June – and yes, after persistent cloud earlier in the week, the skies were indeed clear, just as requested! Right on cue we saw it emerge bright and beautiful from behind the low stretch of land linking Cape Cleveland to the mainland and agreed it was definitely worth the effort to witness it in such a setting. The only disappointment was news that two of our number had met with an accident on their way (fortunately only the vehicle was injured) and the resulting departure of good samaritan, Trish, to help them. 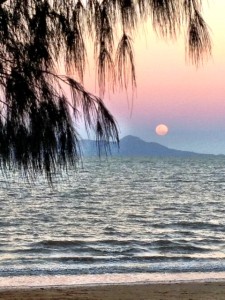 Shortly before 6.30pm we set off with our torches and spotlights along the track leading in from Pallarenda to the Common. With the moon rising steadily behind us we had no trouble finding our way. Max (7) and Ben (4) enjoyed running ahead looking for the eyeshine of wolf spiders (Lycosa sp.) that were abundant on the track while small insectivorous bats fluttered across the sky. As we came to the lagoon, a few lilies in bloom on its surface, I looked hopefully for signs of the semi-aquatic freshwater or keelback snake – no doubt any that were about were not attracted by the cold water.

Our spotlights picked out three roosting darters in trees bordering the lagoon and stone-curlews called from some distance away but other birds were evidently fast asleep and any owls were hunting elsewhere. A group of three Common crow butterflies (Euploea core) were found sleepily suspended from a small tree at the side of the track. Around 8 o’clock, with the track leading us away from the water, we began to retrace our steps, making a detour through a forested area via the former Aboriginal plant trail, now the Wetland Circuit.

Here the most striking nocturnal wildlife on show were the number of garden orb weaver spiders (Eriophora sp.) – probably, but not necessarily, E. transmarina – which had spun their beautiful webs between the trees. In some cases we had to duck our heads or step carefully around them to avoid damaging their magnificent handiwork. 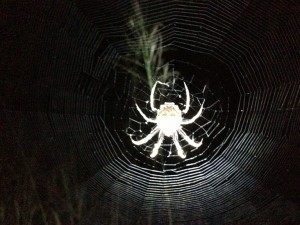 A garden orb-weaver at the centre of her creation. Click on image for clearer view of web. Photo courtesy Peter Cook.

At the centre of each web was its creator, head pointing downwards, waiting for prey. Remarkably, these spiders generally take down their webs at dawn, leaving just a few structural lines. To avoid predation by birds, the spider will hide unnoticed in the shelter of nearby foliage or bark, until spinning a new web the next evening. These orb-weavers are an altogether stouter and less menacing-looking spider than the long-legged golden orb-weavers (Nephila sp.) to which, despite their common name, they are not related. The sexual dimorphism of Eriophora is much less marked, with the body-length of  females only about 9mm greater than males.

Some ants are also nocturnal and Mike found one specimen of the strikingly large Camponotus sp., a sugar ant which he said can also be seen on Castle Hill after dark. Elsewhere he found a small nest made of vegetable and mineral debris, stuck together with silk, and inhabited by many very tiny ants – though he was unable to tell whether these were the original inhabitants and nest-builders, or invaders. New member Peter, who we were happy to meet for the first time, had taken the opportunity to arrive early enough to walk the freshwater lagoon trail in daylight where he came across, and photographed, a large praying mantis – possibly Archimantis latistyla (see below). For this trip at least it could be said that arthropods rule!

We were happy to welcome first-timers Margaret and Melissa, and second-timer Maureen, who we hope will join us again when possible. Grateful thanks to Peter and Maureen for their photos. 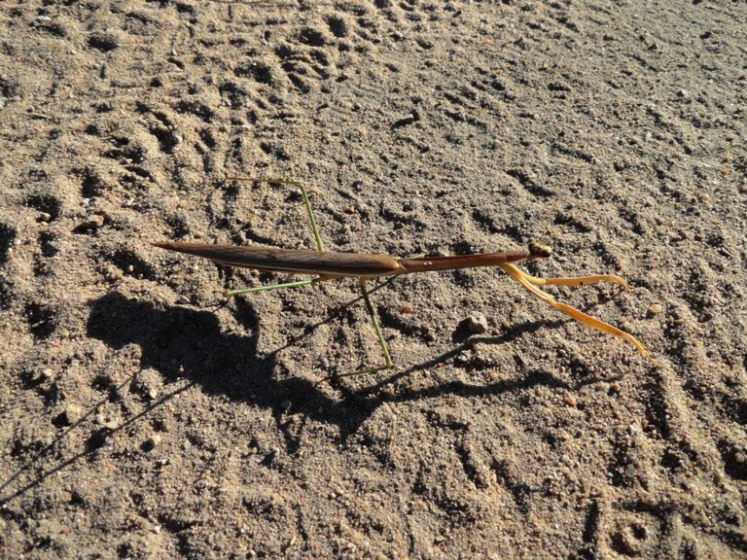