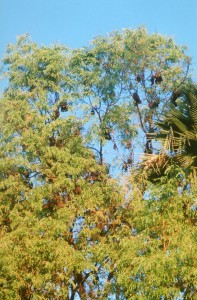 Throughout spring and the first month of summer a magnificent wildlife spectacle was on display around dusk each evening at the Townsville Palmetum, when thousands of flying foxes would fly out from their daytime roost.  The densest part of the colony was to the right of the main path, a couple of hundred metres from the carpark but, with the influx of the Little Red species in late October and early November, the colony extended to trees on both sides and overhanging the path. At its peak there were estimated to be roughly 8000 bats in the colony.

Wildlife carer and flying-fox advocate, Dominique Thiriet, advised that the Blacks had formed a maternity colony, separate from the adult males, in which the females give birth and raise their young until they are old enough to fly. The population of Little Reds, a nomadic species, was expected to move on after a few months following the blossom of Eucalypts and Bloodwoods. As it happened the bats began leaving the colony in December and by the end of the month all had gone.

During the day the bats were largely resting although there was always a certain amount of activity going on – grooming, fanning, feeding young, conversing, squabbling. It was interesting to see how the Little Reds liked to cuddle up closely together creating amorphous bunches of bats on the branches, while the Blacks preferred just a little more personal space and privacy! As dusk approached activity increased with more and more bats circling the trees until they began streaming out overhead for their night feeding. The main exodus would last for about 20-30 minutes and was an awe-inspiring sight.

Unfortunately the colony was not universally welcomed and appreciated. If you are a Townsville Bulletin reader you might have seen an article in which two Annandale residents called for the removal of the colony. The article also cited problems experienced by staff and residents of the nearby Good Shepherd Home, some of whom were concerned about disease risk or felt unable to enjoy their usual outings into the Park. Nonetheless many people continued to enjoy their walks through the Palmetum, some coming specifically to see the bats.

In an attempt to allay these anxieties and alleviate some of the lesser problems arising from the proximity of the roost to the nursing home, the Branch contacted the Home’s management and provided informative literature about flying fox biology and behaviour and the risk to human health. After some persistence on our part, the newspaper also featured our response to the initial article on its editorial page. (A subsequent response to a later article was not published)

It is very sad that there is so much animosity in the community to these fascinating and highly-intelligent, social animals. Of course there are going to be problems when humans find themselves in close proximity to a large population of wild animals but surely in most circumstances we can learn to live with our wild neighbours. We should not forget that humans have been responsible for the loss of so much of the bats’ natural forest habitat and food source, while at the same time, albeit unintentionally, creating highly attractive roost sites for them in our urban and suburban parks and gardens.

It is impossible to say whether the bats will return to the Palmetum, but if they do we should try to ensure that fact and reason prevail over myth, that common sense will moderate the hysteria, and that respect for natural processes will overcome the blind impulse to disrupt, disturb or destroy.  It is encouraging that the city council is taking a measured response by developing a long term management plan. As in so many disputes and disagreements, education is the key and we can all play our part in educating ourselves and our community about flying foxes. A few points to bear in mind:

If you would like to learn more about flying foxes, or reassure yourselves or others about the mimimal risk of disease from having them in your neighbourhood you might like to read some of the following (click on titles):