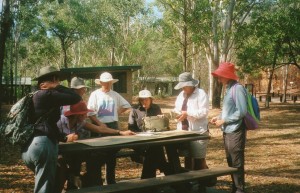 There was certainly a feel of approaching summer on our September field trip to Mount Elliot’s Cockatoo Creek. As we followed the track through the open woodland, upstream from the look-out, it was hot and still, with little shade. Recent prescribed burning on either side of the track further reduced shade and, to some degree, the presence and activity of birds but the botanists still found plenty to look at.

After two kilometres Cockatoo Creek proved such a pleasant place to stop, with shade, birds, overhanging vegetation and the ever-precious sound of running water, that we needed no encouragement to pause here for some refreshments, photography and discussion. Since several of the party had other commitments for the afternoon and the rest of us were deterred by the thought of more hot walking we decided not to go further. Florence drew our attention to a lovely waterhole, just off the track, which would be a beautiful place for a swim after some fresh rain. 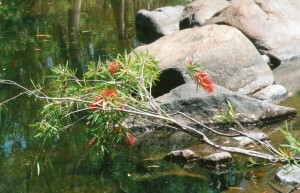 September is the month when the native kapok (Cochlospermum gillivraei) comes into its own and its brilliant yellow flowers studded the rocky valley while, close to the water, scarlet bottlebrush blossoms on Melaleuca (formerly Callistemon) viminalis added more splashes of colour. Other plant observations were Bursaria tenuifolia, which was just finishing flowering and had translucent, lentil-like fruit already forming; the lovely reddish-bronze new growth on the Pongamia (Millettia pinnata); the black fruit on the native olive, Chionanthus ramiflorus; an orange-flowering mistletoe, and a golden orchid (Dendrobium discolour) above our heads at Cockatoo creek. A slight breeze sprang up for the return walk and back at the picnic area we had time for a cuppa and a bit of ad hoc planning for the remainder of the year and 2013.

As we walked we could not escape noticing the amount of horse dung on the track, evidently deposited by the brumbies which inhabit the Park. We felt the Branch should be enquiring as to what the current QPWS management approach is to their presence and if any recent surveys have been done to estimate their numbers or their impact on the Park.

Just before setting out on the walk we had an interesting encounter with a group of runners who were cooking breakfast after an early morning run along some of the lesser known tracks. One of them lent us his hand-drawn map which showed some interesting circuits that could be worth an exploration by our group at some future time, perhaps in a cooler season.

Thanks to Denise for the bird list, below, and Jane for botanical notes. 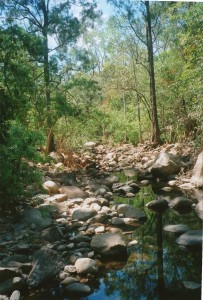