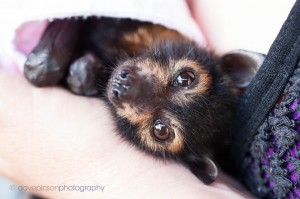 News that shooting of flying foxes by fruit-growers was once again to be permitted in Queensland came, with tragic irony, on September 7th, National Threatened Species Day – a day set aside to raise community awareness and involvement in preventing further losses to our native flora and fauna and helping the recovery of threatened species and ecological communities.

In 2008 the shooting of flying foxes was banned when it was found by the Queensland Animal Welfare Advisory Committee to be inhumane. The ban’s lifting is therefore totally inconsistent with the Government’s recent stance taken against inhumane practices used in the legal hunting of dugong and wildlife by indigenous communities. In Minister McVeigh’s statement at the time he, commendably, said “It is important for all Queenslanders to understand that animal cruelty is never acceptable.”

The new regulations do not allow an open season. There are set limits to the numbers that may be shot per year and growers are required to show that they have tried alternative methods of crop protection. There is also some attempt to mitigate suffering by stipulating that animals must not be shot when in flight, that wounded animals must be located and euthanased, and that orphaned young found with a wounded or dead mother must also be euthanased or delivered to a wildlife carer.

Despite these and other provisions, the total number of bats that may now be legally slaughtered in a single year is a shocking 10,500. And it would be naïve to imagine that every grower will be willing, or even able, to observe every requirement regarding the limits and conditions of their permits. And how will the relevant Department(s) be able to monitor compliance with any degree of adequacy? Especially when so many jobs are being lost from these services. 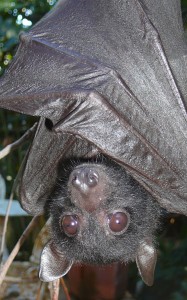 It is never the place of conservation groups to demonise farmers. Like many of us they must struggle with numerous factors to protect their resources and income. I know one grower who is exemplary in his efforts to prevent negative impact on wildlife, and hopefully there are a lot more like him. But there is no escaping the fact that the new regulations will bring increased animal suffering, they will add stress to species already stressed by human and natural forces, they will reduce numbers of species already regarded as vulnerable, and they will be very hard to monitor and police.

There is one more fact – and it is one which is born out by the research and literature of Queensland’s own Dept of Agriculture, Forestry and Fisheries: shooting is an ineffective way of protecting fruit crops from flying foxes. So why are we allowing this inhumane, ineffective and ecologically damaging practice to occur?

You can have a voice – a brief, polite email to any/all of the following will send a powerful message. Click on the name to bring up email address.

You might suggest that, instead of allowing growers to shoot flying foxes while their crops are still raided, the Government could subsidise growers for the cost of installing safe and efficient canopy netting. 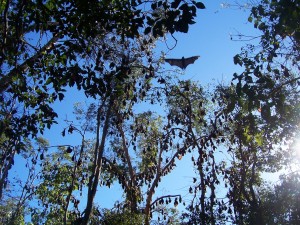 Disruption of flying fox camps like this may increase risk of disease. Photo courtesy of Bat Conservation & Rescue Inc.

And there’s more … a bill introduced into State Parliament by MP Shane Knuth (KAP) would allow uncontrolled culling, disturbance and disruption of flying fox camps, in a misguided bid to prevent transmission of disease or other problems of human-bat interaction. An exceptionally well-researched and well-written submission, prepared by Carol Booth for a coalition of conservation and animal welfare groups, counters the myths and fabrications with scientific evidence and facts. She also explains how over-stressing the animals by such measures can actually increase disease risk through a process known as “pathogen spillover”.

While the extreme measures the bill proposes are unlikely to be supported by the LNP, it needs to be vigorously opposed. Emails to the three gentlemen above asking them to take an evidence-based, conservation approach to flying fox management could be very useful. If you would like a pdf copy of the conservation submission please email us. It is concise, easy to follow and well worth reading.

Many thanks to Dave Pinson and Bat Conservation & Rescue Inc for use of photos. Some other websites to look at are Don’tShootBats.com, and Bats Qld.