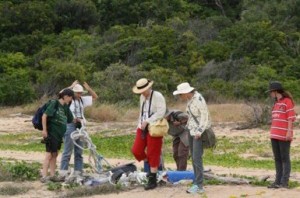 Another month, another great morning in the bush for Townsville WPSQ members and friends – this time, thanks to access provided by AIMS staff member Beth Ballment, it was a trip to Cape Ferguson on May 20th. Ten enthusiastic people, including one brand-new member and two new ’visitors’, were eagerly gathered at the AIMS gate at 8.30am on a bright and breezy morning.

Leaving our cars at the jetty we climbed down for a walk through the mangroves and along the rocky shore. A wonderful land and sea-scape stretched from the hump of Cape Cleveland, with its gullies of hoop pines, sweeping round the bay to Cungulla’s long, gleaming white beach to the south. We identified Mt Burrumbush while debating the identity of more distant peaks – deciding they might have been part of Gloucester Island. Some of the mangrove species here we had also seen at Toomulla, others were different. Beth reminded us that mangroves belong to several different families, crushing the leaves of the Myrtle mangrove to release its eucalyptus smell – a clue that it is in the same family as eucalypts – and showed us the salty deposit on the leaves of some species, excreted through special glands. She also explained the viviparous reproductive process of Rhizophera, Ceriops and Bruguiera sp. by which the seed germinates, and the seedling develops, while still attached to the parent plant, resulting in the familiar propagule. 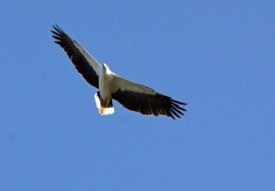 A soaring pair of sea-eagles overhead was a special thrill and lifted our eyes from the examination of paw-prints in the sand, which John and Leslie thought were dog/dingo. Not far away was a distinctive goanna track, apparently making a bee-line (goanna-line?)  for an empty Bundy rum bottle. (Special commendations must go to Denise, Jo and others who gathered up the inevitable harvest of single thongs, bottles and plastic paraphernalia). Meanwhile John was busy adding to his collection of mammalian bones while, among the more attractive flotsam, we found portions of seed from the cannonball mangrove and the four-cornered fruits of Barringtonia asiaticus – the discovery of a five-cornered mutation caused a frisson of excitement and unlikely suggestions of money to be made on eBay for such a curiosity. Even more intriguing was the fine black humus-like material, speckled with glittering grains of mica sand, being washed up by the rising tide. 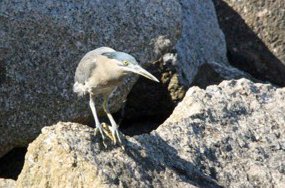 Returning to the jetty Leslie and John spotted, and photographed, a pair of striated herons – those preferring the old names will know them as mangrove herons – while a large green turtle caused concern, seeming to spend far too long on the surface. Great views for us but worrying, knowing how severely these turtles have been affected by the loss of their sea-grass meadows after Yasi. Dan was happy to see a dugong – the subject of his PhD research.

Moving on to the main AIMS beach we noticed how the sky had clouded over and the sea had lost its blue but was still whipped up by the breeze. An invigorating atmosphere and luckily for us it meant we had no need for shade, since the few casuarinas had become casualties of Yasi. Broad-leafed paperbarks were in flower behind the dunes, and runners of the goat’s foot convolvulus streaked across the sand, along with patches of spiky sedge (Pineapple sedge?) and the pretty blue flowers of the slender dwarf morning glory, Evolvulus alsinoides.

On the beach we found a large pile of debris, including some useful-looking lengths of rope, collected by AIMS staff ready for disposal. A wedge-tailed eagle flew over the headland at the far end of the beach and some even clearer dingo prints, of at least 2 individuals, were seen in the sand reinforcing the sense that this is a wild beach. Later in the year the Sea Turtle Foundation will come here to conduct its annual monitoring of nesting turtles. 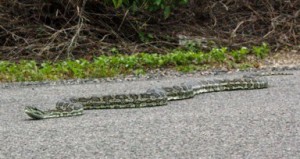 Not long after leaving the AIMS premises John and Leslie pulled up by the side of the road. Chris, Dan and I did the same once we saw the reason why – a beautiful carpet python soaking up the warmth from the bitumen and happy to be photographed and admired before slithering off to a safer spot. It made me think of the popular “I brake for snakes” bumper stickers our Branch produced many years ago at the suggestion of long-time member Jo Wieneke, who had seen a similar one in the US. Does anyone still have one on their car? I bet Jo does! We stopped again at the highway for a look at the egrets, pelicans, spoonbills, stilts and multitude of ducks on the mudflats, before heading back to town after a most enjoyable morning.

Photos of our carpet snake friend (above left) and of new member Dan saying G’day to an Aussie mate (above) are also by John and Leslie.

It was great to have Denise, John and Leslie return for a second helping after last month’s trip, and to welcome new member Dan, from the USA, and visitors Jo and Chris – your collective enthusiasm is infectious, please keep coming! Next month we’ll head north to Ingham for a Tyto Wetlands experience!