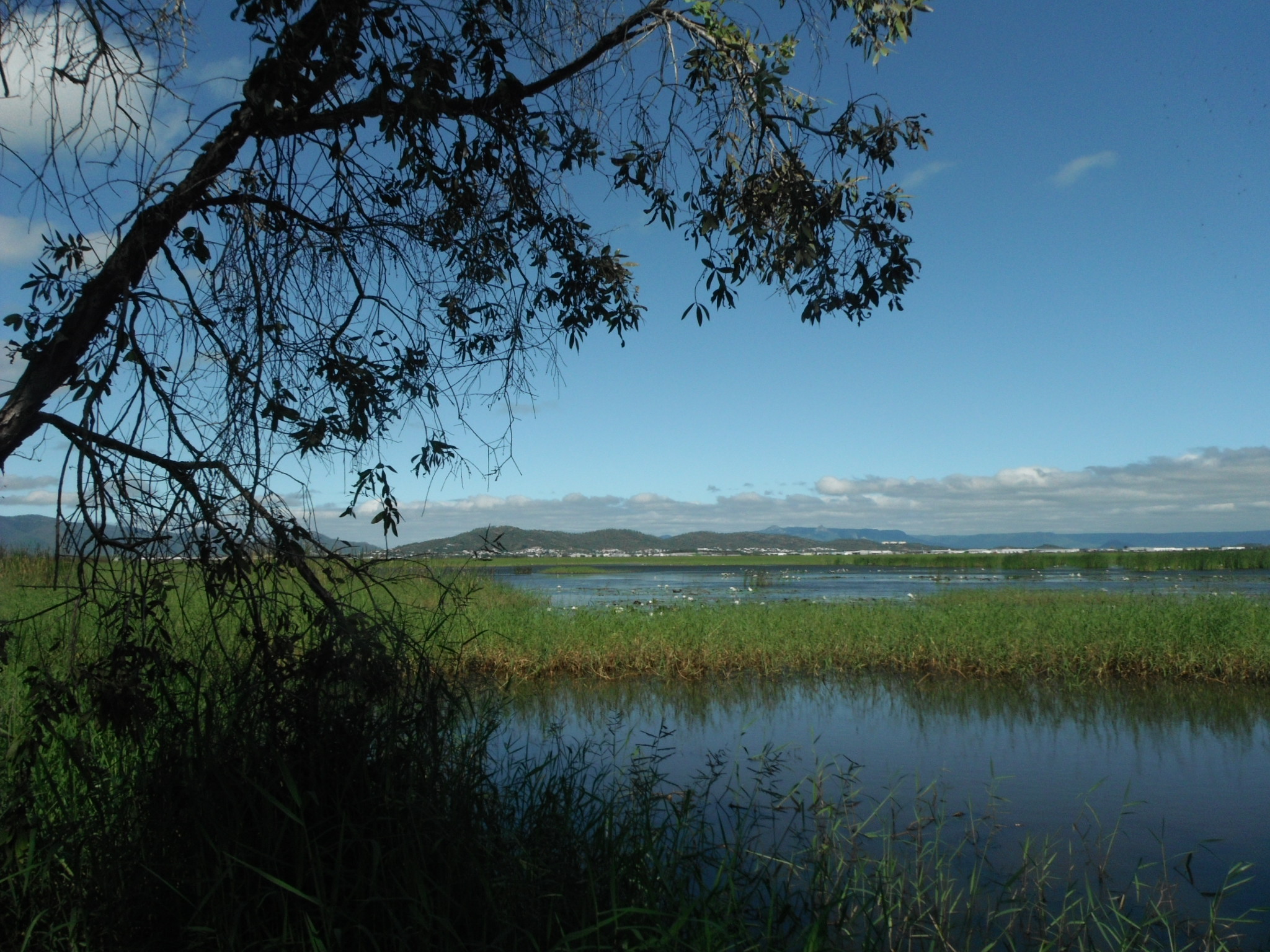 Part of the Common Photo D.S.

We decided to go ahead as planned despite the date clashing with the Sustainability Centre Open Day, which meant only a small group met at the Rowes Bay Wetlands. There weren’t many water birds at all: a lone great egret in the distance and a trio of pelicans circled high above. In the surrounding trees there were sunbirds, black-faced cuckoo-shrikes and a brown honeyeater, plus a magpie lark and a spangled drongo were heard. 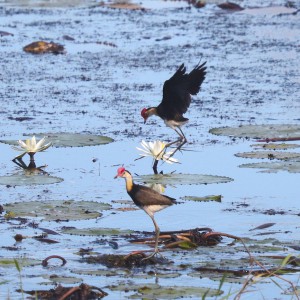 As the crowds were entering the Sustainability Centre’s grounds, we left and drove to the Common, where we picked up a few more members and car-pooled to the Payets tower which gives an elevated view over a large section of the Common. The erratic wet season with several late high rainfall events meant that what wasn’t water and water lilies, was green vegetation everywhere we looked. We saw only jacanas and a sacred kingfisher, and checked there was no possum jammed up under the roof like the previous time we were here, before continuing the drive along the dirt road with stops along the way in the parking areas provided. 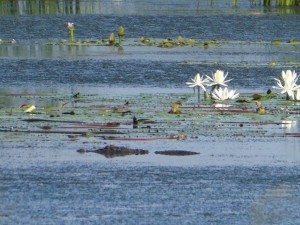 While standing  beside the water at one stop, Margaret thought something moved in the water and took a photo of that area. Looking at it later on computer, she thought there did seem to be a suspicious shape among the water lilies. What do you think? It certainly has bumps in the right places to be a crocodile, probably a juvenile if you compare imagined extra underwater length with the size of the nearby water lilies.There’s no reason it couldn’t be, as one was reported months earlier behind the Sustainability Centre, plus the Bohle River, which regularly hosts saltwater crocodiles, had a major flood earlier with water spreading onto saltpans, increasing fish habitat and providing extra space for a young croc to move into. 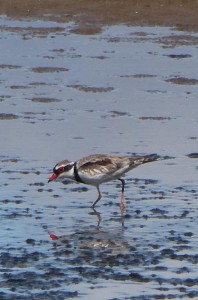 Continuing to the gate that now closes off the old road some people stayed there, trying to get a proper look at a number of small birds in the surrounding trees and long grass, while the rest of us walked out to look across the  saltpan where two black-fronted dotterels caught photographers’ attention.

At the concrete bunker bird hide the inside walls were splotched with the nests of mud wasps which helped camouflage the only frog seen. Out over the water only a darter and a crow added to the bird list,so we headed back to the main gate. Part way along we stopped after noticing another car stopped and looking at something beside the road. 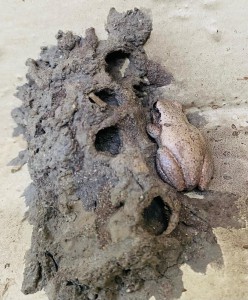 It was a long-necked turtle dithering at the edge. Though they can be seen sometimes moving around on land and crossing roads,it’s usually possible to see which way they’re going and remove them from the road to safety in that direction. This looked like a strange place for it to be coming or going from, as both sides of the road had long dense grasses which would be difficult to struggle through, and if it was heading to the water, that was not close. Rather than let it take its chances possibly crossing the road where too many drivers speed, we moved it to the water side and a short distance into the vegetation where there seemed to be a slight track down between grass clumps.There was no way of knowing if we had done it a favour or not. 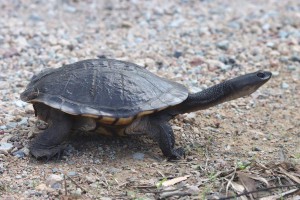 Leaving the Common, some of us went to the Conservation Park to eat lunch and add brush turkey to the bird list (while not adding lunch to the brush turkey)  before heading home. 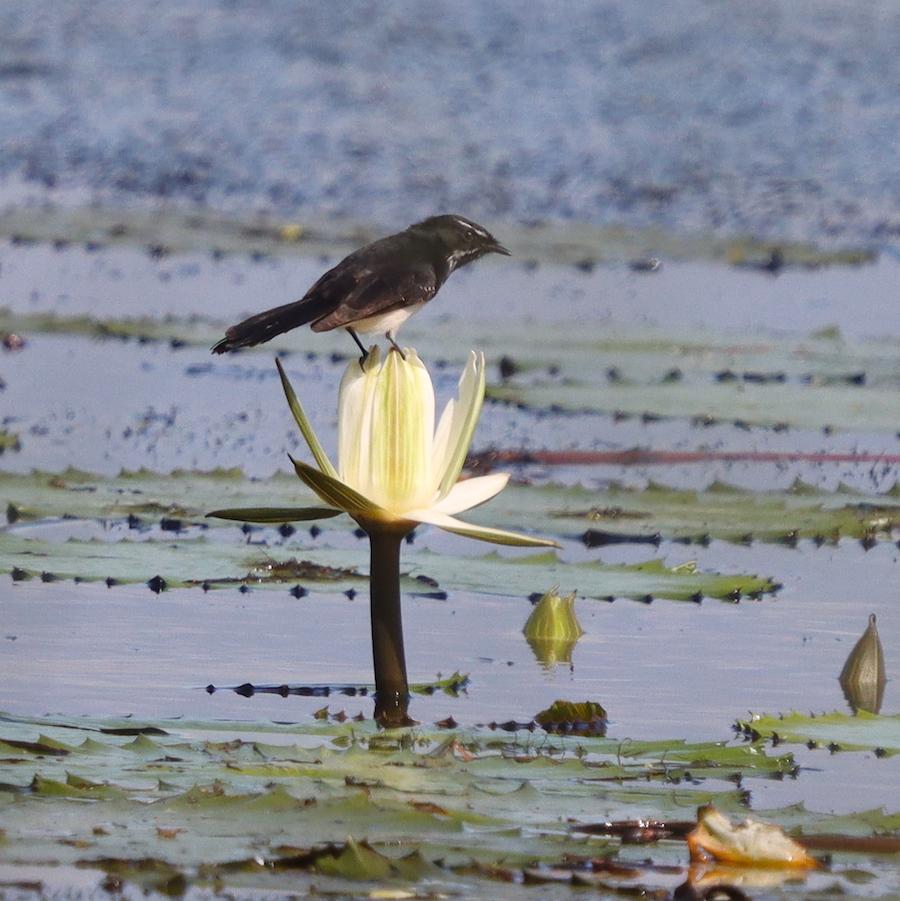