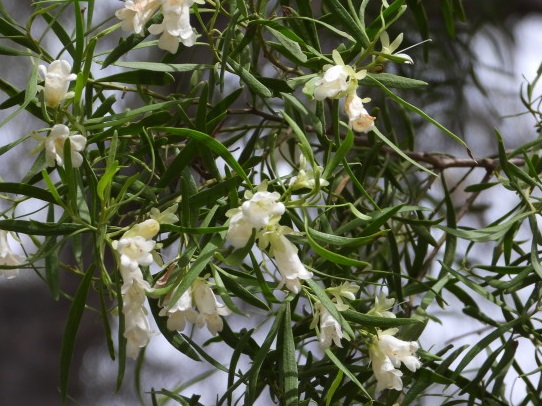 This was different from our usual walks, as it involved driving slowly down empty roads with numerous stops to look at birds and plants. We met at Wordsworth Park and checked out toilet wildlife: several Litoria caerulea frogs (behind door and in bowls), plus two large grasshoppers and  a katydid. We tried to identify the park trees which were an eclectic mix including exotic mahogany and misplaced natives like Peltophorum pterocarpum and Corymbia torelliana. 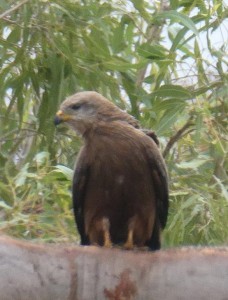 We headed off slowly along Jones Road stopping to photograph a whistling kite and a white-faced heron. Among the weeds and long grass along the road were occasional native trees like whitewood (Atalaya hemiglauca) and Grevillea striata. The paddocks each side of the road were mainly grass that had been grazed, with sparse trees, often Corymbia tessellaris, Melaleuca nervosa and bloodwood and a scattering of chinee apple (Ziziphus mauritiana ), though further along there were large areas with 100% chinee apple cover with many feral custard apple trees growing along the fenceline. Any small animals living in the chinee apple forests would have protection from aerial predators.

Years ago we set up cameras on a property at Black River and photographed rufous bettongs eating chinee apple fruit. According to the landowner this was a frequent occurrence. It would be interesting to find which if any small animals were using this vast infestation for shelter and food, and possibly with custard apple for an occasional treat.

There were large numbers of quinine trees, both Petalostigma banksii and P. pubescens, sometimes growing side by side.The P. pubescens, which was fruiting at the time, seemed to have been allowed to remain in paddocks that appeared to have been cleared of other small trees, and in one paddock were planted in a row. Why would a grazier look favourably on quinine trees? 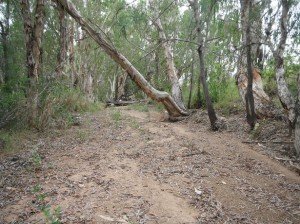 A sandy dry creek bed looked like a perfect place for lunch under a big fig tree growing close to an old Melaleuca leucadendra. Growing on the creek bank we noticed an Elaeodendrum melanocarpum with its black fruits, a Ganophyllum falcatum and a Lophostemon grandiflorus. 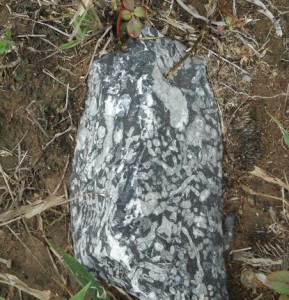 After food and a cuppa we headed back to a different road to look at a tree that had been earlier identified as Eremophila mitchellii (false sandalwood). Just past where we wanted to park there was something black across the road. As we got closer we realised it was a large number of straw-necked ibis just standing on the bitumen, and five black kites were sitting on a fence close beside them. None of the birds seemed to be doing anything. We turned back and found another Eremophila tree flowering beside the original one which had finished. 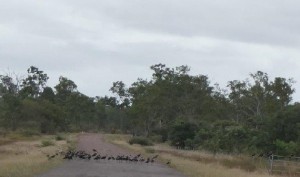 While wandering around this area we found piles of leftovers from roadworks including piles of broken up rocks all of which contained what were probably fossils. It would be good to know where they had been blasted from and what they contained, presumably from prehistoric reefs.

As we were about to leave, a dingo came walking along between us and a fence, and ignored us, then stopped for a few minutes inspecting the ground under a tree while periodically looking up at us.She then started running to the road and ran down it straight towards the standing ibis flock, but swerved into the paddock opposite, ignoring the birds who had also ignored a speeding dingo coming straight towards them. We drove slowly towards them still wondering what the attraction of that spot was, but also worried if a hurtling ute came around the corner behind them. The ibis did take flight, but still standing on the road were the black kites who’d moved from the fence to join the (in)action. Of course they then flew off too. What had we interrupted? To our limited perception there was nothing interesting about that patch of road and we didn’t have time to see if they reassembled. 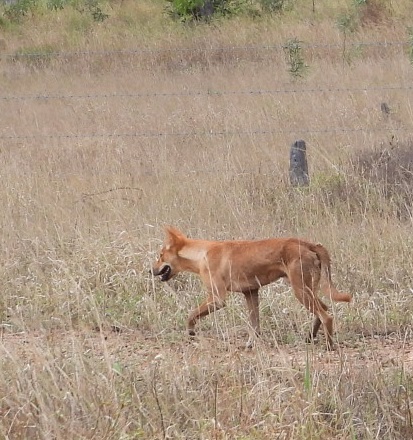