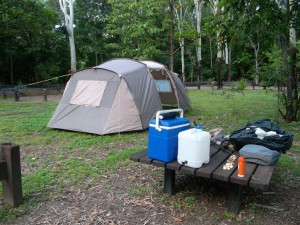 One of our very alert members drew our attention last week to the deeply disturbing news that QPWS will no longer allow camping at one of our loveliest, and certainly the closest of our National Park campsites, at Alligator Creek in the Mt Elliot section of the Bowling Green Bay National Park.

The ‘visitor precinct’ of this section of the Park has been closed since early March for a major re-development and upgrade of facilities – including an expanded day-visitor carpark and enhanced amenities and infrastructure for people with disabilities – but when it re-opens in late July, the camping area will be gone.

Reasons given for the closure were the reported “declining use” of the camping area, lack of space for necessary expansion of day-use facilities and lack of sewage and water treatment facilities. In relation to the latter, please note that this applies just as much to the day-use area as it does to the campsites, and most National Park users readily accept the composting toilets and the need to bring their own drinking water. Regarding usage, QPWS figures quoted in the media (TB 8/4/21) show an average of 435 camper-nights per year “over the 5 year period 2016-2020”. This hardly seems insignificant especially given that a) the Parks Service acknowledges usage is under-reported because an unknown percentage by-pass the booking system and b) the inclusion of 2020, a year of very little travel, in their calculations surely must have brought the average figure down.

There are many reasons why this move is so troubling:

Replying to a member of the public who contacted the Minister, the deputy Director-General of QPWS, Ben Klaassen, wrote that he was “pleased to advise that camping opportunities will continue to be offered at the other seven camping areas within the park”

So, are we really so spoiled for choice that we will hardly miss Alligator Creek?? Of course not! Of these “secret seven” sites, not one has even basic facilities or water; four have no vehicle access at all, and of these, two require medium to long hikes with packs and two can only be accessed by experienced bushwalkers; two more require all-terrain vehicles and can only be accessed at certain tide levels. Another, on Barratta Creek, is approx 75km from Townsville and described as isolated and hard to find. It can also be affected by tides (and crocs?). These last three are mostly used by fishers and one has been plagued by hoons and trailbikes and scarred by broken glass and other debris. Certainly none can be regarded as even close to comparable with the Alligator Creek site. You can view the list here.

Another factor in our unease is the apparent lack of consultation or information-exchange with stake-holders such as campers and bushwalkers, youth groups or organisations like ours which have a long history of interest and involvement in the protection, management and use of National Parks. Nor was any mention made of the intention to disallow camping when the closure for re-development was advertised. The brief article in the Townsville Bulletin, perhaps prompted by the realisation that the news had leaked out, appeared weeks after the Park was closed and many months after the decision was made.

We fully support extending access for people with disabilities and enhancing their experience and enjoyment of this National Park – of course we do – but how ironic that campsites with disability access have now been lost!! In any case, surely this enhancement could be achieved without sacrificing the camping area. If this campground is genuinely under-used, then by all means reduce the generous16 sites to something more realistic, and ensure they too are disability accessible. Getting rid of them altogether is an over the top response and ignores one of the great values of our parks – their ability to give us quiet times away from urban pressures and noise, immersed in the presence of the natural world.

Compared with day-visitors, campers may well be a minority group in those NPs close to urban centres, but that does mean they are to be ignored or squeezed out. While there is nothing wrong in visiting a National Park just for a lunchtime barbecue, a childrens’ party or a quick swim, it may be that campers are the very group most likely to hold or to develop a deep awareness of the purpose and value of a national park, by spending quality time, experiencing the park and its wildlife by day and by night, at dusk, or early dawn, outside of those peak hours of busy (and often noisy) human activity.

We have expressed our views to the following and, if this also concerns you, please add your voice.