Our Annual General Meeting was held successfully on March 28th. Our four existing office-bearers were re-elected to the management committee and we welcomed Pam Cocks as an ordinary member of the committee. The following President’s Report gives a summary of our activities for 2020. 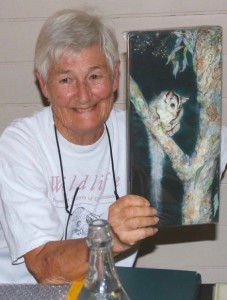 Life membership and farewell for our long-serving treasurer.

Membership: The Branch ended the year with 51 members which included five new members. We are managing to stay fairly steady with gains and losses. At the start of the year, January 2020, we held a morning tea to farewell Jane McLean, a member for over 30 years and our Treasurer for 25 of them, who was given Honorary Life Membership of the Society for all her work. This was presented to her by old friend and WPSQ Councillor Paul Sutton. Jane was also given two of Daryl Dickson’s beautiful animal prints as a farewell gift from all of us in the Branch. (Photo, Malcom Tattersall)

Meetings: A socially-distanced AGM was held in March in an open-air shelter at the Palmetum with only 6 members attending – the minimum required for a quorum. The main business was the election of our new Treasurer Carole Lonergan. Shortly afterwards restrictions on gatherings tightened as Queensland went into lockdown. Later, as restrictions eased slightly, committee meetings were possible with only the 4 executive members attending, and 4 meetings were held during the year.

Field Trips: Covid reduced the number of field trips to seven, if you count the February trip to the Palmetum which was rained out shortly after starting. They were: 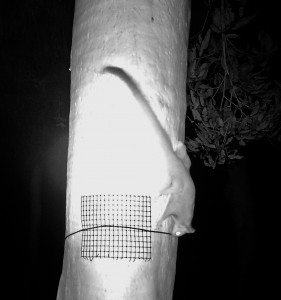 Mahogany Glider Project There were a few trips to Ollera to move cameras at the start of the year, avoiding the flooded creek and the boggiest areas, then Covid restrictions stopped our work until May.

The original plan was to finish at the end of June, but the CSAG unit within the Department of Environment and Science, extended the project by six months to allow time for Girringun Aboriginal Corporation to do more Lantana spraying. We did a few more transects in the extra time and happily got photos of more confirmed mahogany gliders. There were photos from 34 sites for the whole project. Most of the (unprotected) private property supports a healthy population of these endangered animals, as does the western part of the TCC (precariously protected) nature reserve. Members involved in this project attended Mahogany Glider Recovery Team meetings in March and September and we will continue to liaise with them as we continue our surveys at Mutarnee.

The final stages of the project, including submission of a comprehensive final report to the Department, spilled over into our current financial year but Beth is thanked for compiling periodic interim reports and data presentation and continuing to be the liaison with the Department and NQ Dry Tropics throughout 2020. Thanks also to Carole for wrangling the finances. A more detailed report will be posted on the blog later. (Photo, WQ Townsville Branch)

Awards: Our Vice President, Liz Downes was named the winner of the Volunteering North Queensland ‘Heart of Volunteering’ award in May. Then in September at the WPSQ AGM Liz was awarded (in absentia) the Margaret Thorsborne award for an outstanding contribution by a Wildlife Queensland member. In November she was named Queensland Volunteer of the Year as well. Congratulations Liz, some recognition of all you do for environmental advocacy and your volunteer work at the Eddie Mabo Library at JCU.

Advocacy: In addition to numerous emails and phone calls on a variety of topics and concerns, several more formal letters and submissions were sent, and two face-to-face meetings were held with TCC staff.

Other Issues : Other members, especially younger ones, need to consider taking over the Branch.