The last time we visited Mt Elliott and did the walk to Cockatoo Creek it was after a long dry period and the bush was looking parched and stressed. What a difference to see it after a couple of metres of rain! Alligator Creek was still gushing down over its little waterfalls and the swimming holes were fuller than I have seen in a long time. 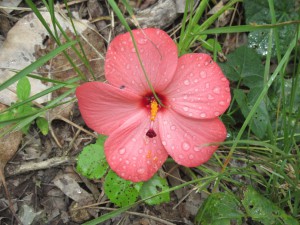 No bird list this time, clearly they all had better things to do than parade in front of yet another group of wildlife watchers – well, apart from the scrub turkeys who will always parade anywhere if there’s a chance of a feed. Instead of birds, flowers and butterflies were the stars of the day. Most noticeable were the vivid splashes of deep pink or red at ground level on either side of the track – it was hard to walk more than a few paces without feeling obliged to stop to admire and photograph the striking hibiscus- like flowers of the commonly named musk mallow or native rosella (pictured above). Both names roll off the tongue more freely than its scientific moniker, Abelmoschus moschatus subsp. tuberosus! This low-growing perennial dies back to its underground tuber in the dry, emerging brilliantly after the first good rains. Earlier on the track we noticed a true hibiscus, H. meraukensis, a large white flower with a deep red centre. Also noted were the flowers of the native jasmine (Jasminium didymum), the purple Indigofera pratensis (a dwarf perennial herb) and several small trees, Bursaria incana, covered with white blossom. Along the track and on the hill slopes on the other side of the creek’s steep valley the cycads (Cycas media) really stood out with their fresh foliage.

As for butterflies, I’m afraid we were embarrassingly challenged to identify the many that danced about us. Species of the small grass-yellows were everywhere but would they stay still long enough for us to photograph or at least get a good look at their markings? Of course not. We were more confident with the glasswing (Acraea andromacha) and felt we should have known the several very dark/black specimens with large white patches on their hind-wings – checking my copy of Michael Braby’s guide later, they looked most like the Ambrax swallowtail (Papilio ambrax) but might have been the more common Orchard (Papilio aegeus). Either way, I saw only males. 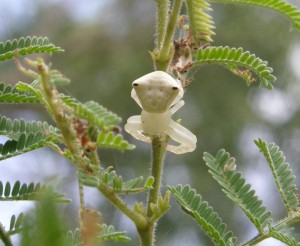 Margrit’s small well-camouflaged amphibian remains unidentified but her great eye for small things picked up a delicate white flower-spider, later odentified by spder expert Mike as almost certainly a female Thomisus spectabilis (pictured at left). The Thomisidae are a spider family often referred to as ‘crab spiders’ and are ‘free hunters’ – in other word there’s none of that spinning and weaving and messing around with domestic chores, they just get out there on the hunting trail! Thanks for the photo, Margrit.

The track beyond Cockatoo Creek was still officially closed though other walkers strode gaily past the sign probably in quest of dramatic selfies in front of the big falls a few km further on. We kept our feet dry and returned to the picnic area where we enjoyed lunch and a cuppa while a large-bellied goanna ambled past and, much to our amusement, had its tail tweaked by a disrespectful brush turkey. 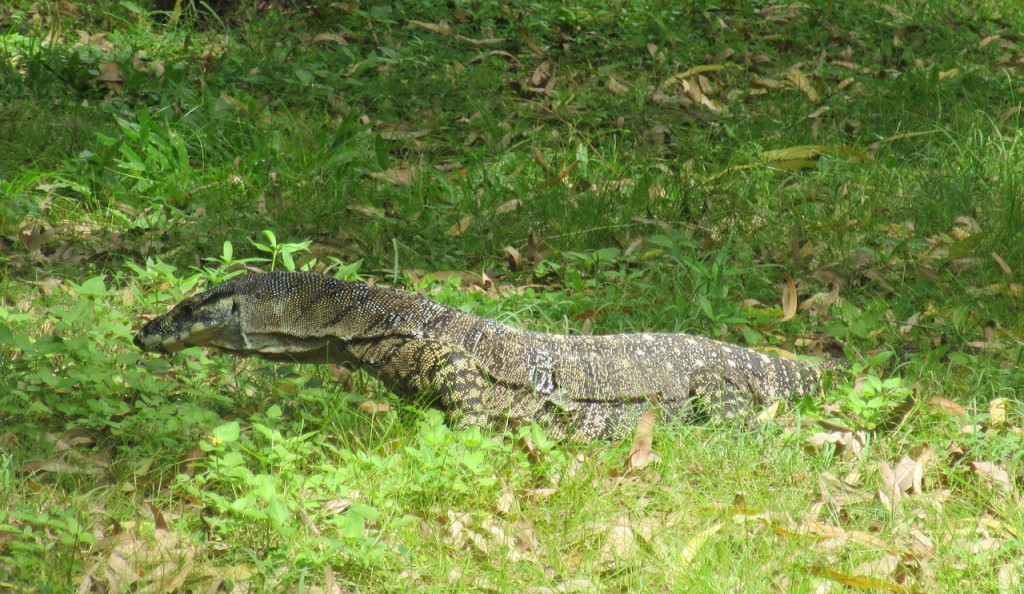