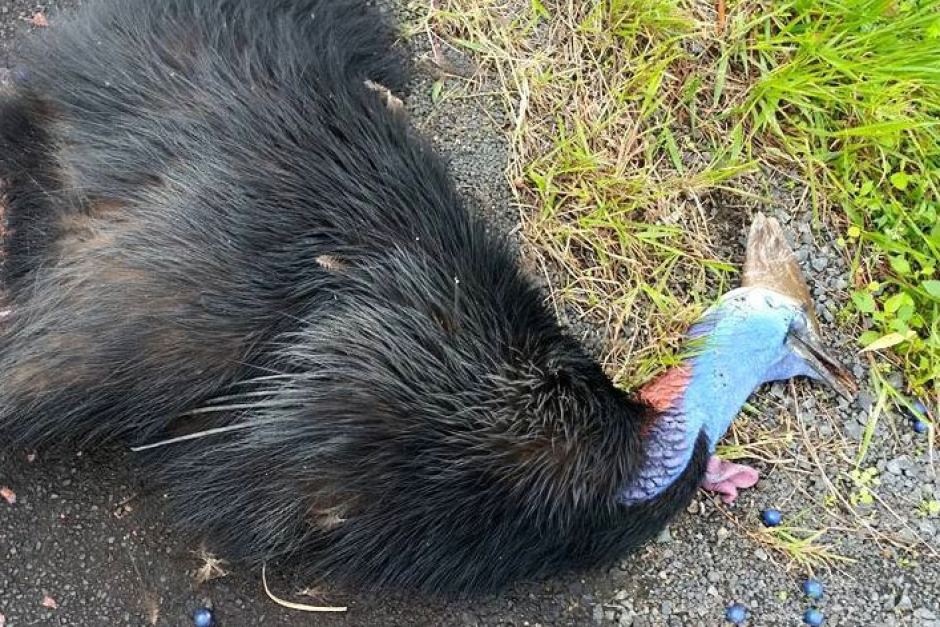 I make no apologies for heading this post with such a gut-wrenching photograph. A drastic situation seems to be developing for our cassowaries in their heartland area around Tully-Mission Beach-Innisfail.

Last week came the news that the Garners Beach Cassowary Rehabilitation Centre was to close. This centre came into being as a result of the generosity of a local resident who gave the property to the Queensland Parks and Wildlife Service (QPWS) many years ago. Formerly managed and run by QPWS, withdrawal of government funds in 2014 saw the intervention of the conservation organisation Rainforest Rescue to prevent its closure. With this group now unable to continue their role, closure seems inevitable unless government resumes control and funding of this essential facility. Local vet Graham Lauridsen has warned that closure will mean euthanasia for sick or injured birds that could otherwise have been brought back to health and released, while orphaned young which have previously been raised at the centre until ready for release may also have nowhere to go. 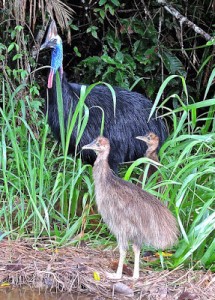 This dire news comes soon after locals began expressing grave concerns at the serious deterioration in the way the Dept of Environment and Heritage Protection’s Wildlife Unit handles reports of injured birds. Previously, experienced rangers were able to respond rapidly and humanely to cassowary incidents. Now it seems the task is increasingly falling into the hands of untrained police officers, members of the public or hard-pressed veterinary staff. Innisfail’s Yvonne Cunningham, who has decades of experience with cassowaries in the Innisfail region, recently recounted the failure of the unit to follow up two separate reports of cassowaries in trouble. Another concerned resident said it took three weeks of persistent phone calls before EHP staff came to assess the condition of a cassowary that was showing visible signs of injury and pain. As Yvonne says, “something is not right when injured cassowaries are left unattended to possibly die in horrible pain”.

On July 9th Dr Lauridsen went public in an interview with the Tully Times in which he described the collapse of “what was once an efficient and humane system to deal with injured, ill or dying birds.” Dr Lauridsen is anxious not to blame EHP rangers, who are probably equally distressed by the current situation. Sadly, he believes they are now prevented from doing their jobs by a complete breakdown in the rapid response procedures due to loss of funding and staff – and, dare we say, bureaucratic incompetence? 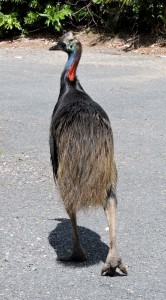 The dedication of vets like Dr Lauridsen, who has twenty years experience with these birds, is laudable but they must be backed up by well-resourced and efficient government support at every level. All have a responsibility not only for safeguarding the future of the species but also for ensuring that birds in trouble are treated quickly and humanely and have a refuge where they can safely recover.

Meanwhile, during a period when cassowaries are very much on the move, often with young ones in tow, there is increased tourist traffic on the roads, with too many people (and not just tourists) driving without due care or encouraging the birds into danger by offering food. The death toll for 2015 already stands at 9, with 4 birds killed in one dreadful week in June. Concern about the threat of dogs, often allowed to run loose on beaches and in other areas frequented by cassowaries, remains very high. It is surely time for a serious community conversation about the ownership and control of large dogs in such areas and about all the factors which are impacting on cassowary survival. Prevention is always better than cure.

Cassowaries are not only icons of the wet tropics, they are keystone species for the health and survival of the forests they inhabit. They are also a major tourist attraction and as such are of great economic importance to the region – it is after all called the Cassowary Coast for a reason.

What can you do?

Email or phone the Minister, Hon Dr Steven Miles, (ph 3719-7330) saying how worried you are both by the poor response time to reports of sick/injured cassowaries and by the loss of the Rehabilitation Centre. Ask that he urgently takes the necessary steps to ensure these issues are resolved and the rehab centre remains open. Stress the importance of the Environment department working closely with those of Tourism and Main Roads to reduce hazards to cassowaries. Say you believe such government support and action would be broadly supported by the public.

There is now also a petition on the Queensland Parliamentary website, which can be signed by Queensland residents. Click here to bring up the site.

Email the Cassowary Coast Regional Council. Tell them you are worried about the number of cassowary deaths in their region. Ask that they urgently review how existing measures to reduce road kill, dog attacks and habitat loss can be strengthened – or what new measures need to be introduced.

Please always be polite when writing to politicians or public servants.

… and if you are driving through cassowary country, either on major or minor roads, please stay casso-wary, and be prepared to slow right down especially where you don’t have clear vision ahead. If you have dogs, keep them on the lead at all times, even on beaches. If you see a cassowary that appears injured or unwell these are the numbers to call: RSPCA 1300-264625 (1300 ANIMAL) or the Cassowary Hotline 1300-130372.