Our July field trip has a change of date and destination! Sometimes things just don’t work out as planned and we will now be heading to Cape Ferguson on Sunday 26th July.

August field trip: Sunday August 30th: Following our exciting Geoffrey Bay excursion last year, another low-tide exploration has been arranged, this time to the Rowes Bay foreshore, with marine biologist John Collins as our guide. This will be an afternoon trip to coincide with the tide and full details will be published in next month’s update.

Quoll-seeking trips will resume when the new DEHP permit has been received. An unavoidable delay with the permit application (in Brisbane) meant the last two trips had to be postponed. Co-ordinator Alma Ridep-Morris will get in touch with all quollers on her mailing list once the permit arrives.

ReefBlitz comes to Townsville – Are you interested in “getting your hands dirty as a citizen scientist for the day”? If so mark October 16th-17th on your calendars. The inaugural ReefBlitz was held at Airlie Beach in 2014, but this year it is Townsville’s turn. We will keep you posted when more details are available. 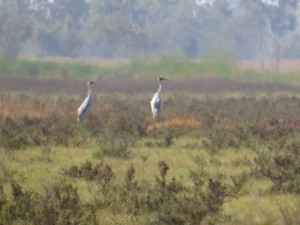 Jerona field trip:  You will find the report of last month’s trip to Jerona here. A really fascinating morning in the company of our expert guide Jon Luly. For many of us it brought home the hidden nature of the world that lies between the highway and the less populated parts of our coast which we so often forget about as we head north or south. For those who missed it, the area certainly deserves a repeat visit. When reading the report, make sure you click on the links for a more complete set of Melissa’s and Julia’s photos. Among others you will love Julia’s ‘laughing’ darter and Melissa’s array of Avicennia roots. 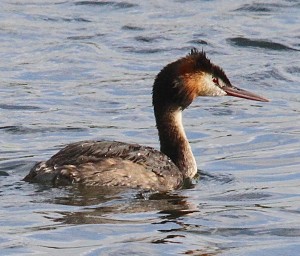 Sea-going grebe – an unusual sighting of a solitary great-crested grebe, normally seen on freshwater lakes and rivers, was recorded in May at the mouth of the Johnstone River by keen naturalist, conservationist and photographer, Yvonne Cunningham. Three weeks later, walking along the Cardwell foreshore in the early morning, what should I see but a lone GCG paddling in windy conditions just a few meters off the beach, heading south towards the Hinchinbrook Channel. Was it the same bird? Who knows? But if you see a “funny looking duck” off the beach one day, it’s worth taking a second look.

Death by a thousand nets: In her blog post of June 20th Yvonne (see above) voiced her concerns about the practice of commercial netting in the lower reaches of streams and rivers, in the Wet Tropics and elsewhere, which she believes comes at an unacceptable cost to wildlife and the biomass of our waterways. Please take the time to read what she has to say here. Meanwhile, in an indirectly-related move, a group of recreational fishers are banding together to support a Queensland Government proposal to ban netting from three areas along the Queensland Coast. As conservationists, knowing how harmful these nets are to dugong, dolphin, turtles and other marine life we should be lending our support to their efforts, which are being strenuously opposed by commercial fishers.

Great Barrier Reef: the world’s still watching. As expected, and as reported via news media, the World Heritage Committee agreed last week that present and projected measures to protect the GBR are sufficient to keep it off the shameful “in danger” list. Clearly the hard-won decision to ban capital dredge-spoil dumping in GBR waters was a significant factor in this outcome, however any suggestion that the Committee is “relaxed and comfortable” about the Reef’s future is false. You can read the statement from WWF here.[Link expired]

AND A LITTLE READING MATTER … 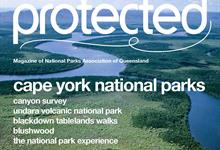 If you have a passion for National Parks, why not subscribe to Protected – the free bi-monthly online magazine produced by the National Parks Association of Queensland. The latest issue has articles on Cape York, Undara, the Blackdown Tablelands, and much else. Go to this site and then click on Issue 3 June/July, or visit the NPAQ home page for more information about an organisation that has been standing up for National Parks since 1930!! [Link expired]

And if you aren’t a subscriber to Wildlife Australia, our Society’s own quarterly magazine, you are missing a lot of “unmissable” articles – well-written, well-researched and always thought-provoking. The Winter 2015 issue has a powerful article about those long-distance travellers, the migratory shore-birds, and how the changes we are making to their flyways are imperilling their future. For those of you who, unlike this writer, are app-savvy you can also download the magazine from your favourite app store.

And there’s more … The Climate Council’s revealing report on Galilee Basin coal is available here. And on the NQCC website you will find their latest update on the situation regarding the Adani Carmichael mine.