OUR MAY FIELD TRIP WILL BE TO JOURAMA FALLS -SUNDAY 24th. A 90 minute (or less) drive north from Townsville will take you to beautiful Jourama Falls. Please see all the details of this trip here, [Link expired] including options for an overnight stay.

and from JOURAMA to JERONA in JUNE: Please note that our June field trip has been brought forward one week to Sunday 14th June. This is to take up the offer of Jon Luly, from JCU’s School of Earth and Environmental Sciences, to lead a trip to the little known Jerona area south of Giru. More details to follow. 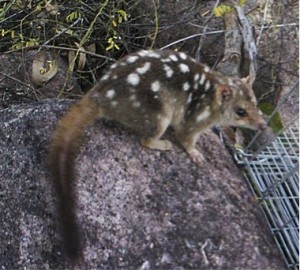 QUOLL-SEEKING IS ON AGAIN: After several active years for the local quoll-seekers, changed circumstances meant no surveys were conducted in 2014. But that is about to change and the new co-ordinator, Alma Ridep-Morris is hoping to organise the first of this season’s camera-trapping trips shortly. If you are already on Alma’s list of contacts, please let her know if you are still interested in taking part in upcoming surveys. If you would like to be included in future news and notices about trips, please email us and I will make sure you are added to the list.

ECOFIESTA – SUNDAY MAY 31st: The Council’s annual Ecofiesta is a little earlier this year, to avoid a clash with the June long weekend, and we have confirmed that the Branch will again have a display. A great opportunity to present our activities to the public, encourage new members and raise awareness about the value of our wildlife, flora and natural ecosystems and landscapes.

The report of our CASTLE HILL TRIP last month is now posted here – it was great to have 18 people turn up for a very early start. While the bird list was modest, the plant list was so big it became a post on its own – so you can read it here. Common names have been included where known. Both posts have some lovely photos from Malcolm.

AUSTRALASIAN BAT NIGHT last month was a huge success as regards people numbers, though not quite so many bats to be seen! Nonetheless, at least 80 people gathered at Rossiter Park, learned a bit more about bats large and small, listened to the microbat calls picked up on an Anabat detector and generally seemed to enjoy themselves. It was a great bit of team work between ABS members, NQ Dry Tropics, NQ Wildlife Care, Wildlife Queensland and NQCC. There is already talk of organising a Hallowe’en Bat Party later in the year.

OUR BRANCH AGM was held on Sunday 3rd May. Liz Downes, Beth Ballment and Jane McLean were re-elected to their respective positions of President, Secretary and Treasurer and we welcomed Denise Seabright onto the executive as Vice-President, to replace retiring V-P Nanette Hooker. Our thanks go to Nanette for her contribution over the last two years. Two additional members, Ken Martin and Mike Downes, joined Jackie, Chris, Julia and Sandra on the informal planning group. My report on the year January-December 2014 is available here. 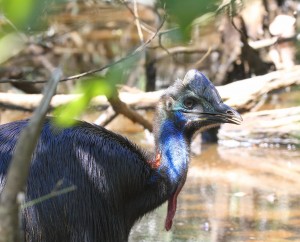 A shocking report came from the Innisfail Coast where a group of 4 adults and 2 dogs were seen on the beach harrassing one of the local cassowaries. Not only were the dogs unrestrained but two of the men began hitting the bird with sticks as well. Read the original story here and the slightly happier follow-up here.

You need this number!! Do you keep the NQ Wildlife Care phone number stored on your mobile or landline phone? You never know when you might find a sick, injured or orphaned animal needing help. Store 0414 717374 on your phone(s) now so you are never at a loss. Another useful number is the RSPCA’s 1300 ANIMAL.