Platypuses Are Dying in These Nets – Ban Them NOW, Queensland! 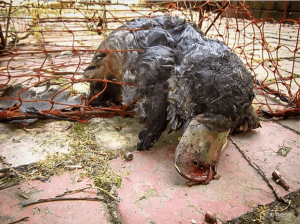 This appeal comes from the Platypus Alliance, a group of organisations working together to protect Australia’s air-breathing semi-aquatic wildlife such as platypus, rakali, water dragons, and turtles from drowning in enclosed yabby traps.

The alliance has made progress in Victoria and New South Wales but, while discussions are in progress, the traps have still not been made illegal in Queensland. These deadly traps could be replaced by open-top traps which would allow non-target species to escape.

Fishing traps are drowning platypuses in Queensland waterways, and we need your help to put a stop to it.

Yabby nets (aka “opera house nets”) are commonly used to catch crayfish – but they are indiscriminate killers, luring in animals such as platypuses and drowning them.

Many of these traps are used during the summer months, when female platypuses are foraging for food for their babies. If a mother is caught in a trap, her young will starve to death.

Because of the “set and forget” nature of these traps, they’re often left in the water for months at a time, and some are forgotten about completely, killing unknown numbers of animals.

In 2018, more than 10,000 PETA supporters voiced their opposition to the sale of opera house nets. As a result, companies such as Kmart, BCF, CH Smith Marine, Aussie Disposals, and Anglers Warehouse pulled them from their stores, and the government of Victoria officially outlawed them.

In 2021, the government of New South Wales followed suit and announced that the traps would be prohibited in the state beginning on 30 April 2021. Now Queensland must do the same – and quickly.

In Queensland alone, more than 200,000 of these traps are still being purchased every year. Research from the University of Queensland has found that platypus populations have disappeared from five locations around southeastern areas of the state.

Please join us in signing this petition to Meaghan Scanlon MP, Minister for the Environment, and Mark Furner MP, Minister for Fisheries, urging them to ban the use of opera house nets in Queensland now!