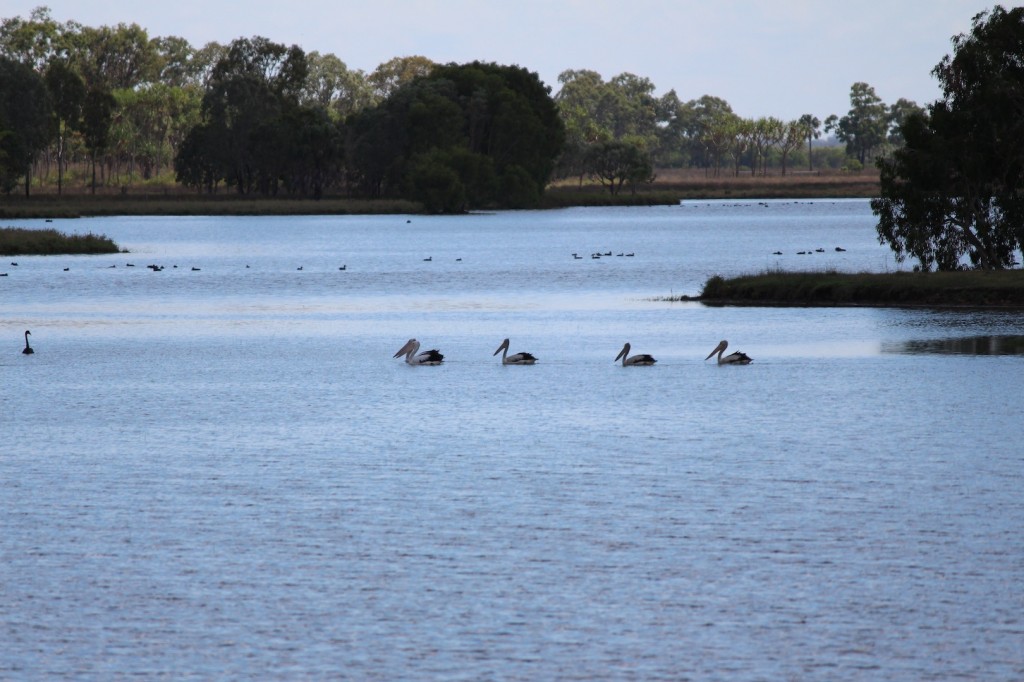 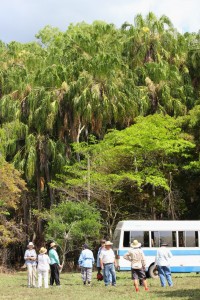 Undoubtedly the Cromarty wetlands, lying between the Mt Elliott Range and the Haughton River, as it winds its way to the sea, are one of the jewels of our region’s natural heritage. Last month twenty of us made the short drive south to rendez-vous with Mark Stoneman, the honorary executive director of the Wetlands and Grasslands Foundation which manages Wongaloo, the Aboriginal name for the area.

Under a bright spring sky Mark came trundling towards our assembly point in his Blue Goose bus. Before we boarded he gave us a short talk on the importance of these wetlands, which are internationally recognised under the Ramsar Convention. He also outlined the history of his own involvement and the plans to establish the area as a world-class reserve to protect the wetlands and wildlife while providing public access, interpretation and opportunities for research and education.

As we bumped along in the bus towards the freshwater swamps and lagoons Mark apologised for the low numbers of waterbirds, explaining two factors which were responsible. Firstly an incursion of saltwater during Cyclone Dylan, compounded by damage to natural tidal barriers, had affected the bulkuru sedge which here reaches its southern-most limit and on which both brolgas and magpie geese feed. Secondly, a late wet season flood plus rain in August and early September had encouraged many birds to spread out.

Nonetheless for those who had never visited the area before, or at least not for many years, it was exciting to get an idea of the extent and richness of these wetlands and their associated woodlands and grasslands. And if large flocks of waterbirds were missing there were still quite good numbers of black swans, black ducks and pelicans on the open water while egrets, herons and stilts patrolled the edges. As a pair of sea-eagles swooped low over our heads Mark lamented the fact that they had made a meal of this season’s jabiru chicks – proof that there’s nothing sentimental about natural processes. 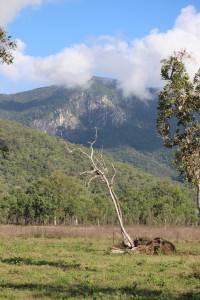 As well as the freshwater lagoons themselves there are enticing creeks and gullies, melaleuca swamps and woodlands, stands of Livistona palms and pandanus, lowland vine forest and open grassland. As well as being popular with wallabies Mark mentioned that the poplar gum woodland is habitat for the endangered black-throated finch – though none presented themselves for inclusion on our bird list! Nor did we get close enough to the swamps to tempt any other creatures looking for a quick meal. Mark took some pleasure in informing us that Cromarty is said to host the highest concentration of saltwater crocodiles south of Lakeland Downs on Cape York.

Against the stunning backdrop of Mount Storth, and the green hues of other trees, shone the burnished foliage of Terminalia and Millettia (formerly Pongamia). Matchbox bean vines (Entada phaseoloides) formed twisted loops into the canopy, occasionally dangling one of their impressive seed-pods. Here and there we saw small mobs of agisted cattle which, by means of judiciously placed fencing to keep them in desired areas, were working on weed control. Mark regards intensive cattle-grazing in targeted areas as a much better method than spraying. In one spot they were munching their way through the class 2 pest plant Hymenachne amplexicaulis which invades and clogs streams, rivers and lagoons. 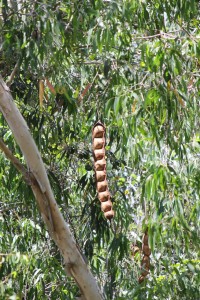 After a 2-hour tour, with several stops to get out and look more closely at wildlife and vegetation, Mark was ready to return us to our cars. Eight of us chose to spend more time around a rainforest creek and, by means of following coloured tags and some electronic way-finding on 2 mobile phones, we eventually emerged onto Reed Beds Road and so back to our cars. In the cattle paddocks were red-backed fairy wrens, and an anxious pair of willie-wagtails guarding three fledglings in a precariously-placed nest while near the road a group of nankeen night herons roosted in the shade.

It is to be hoped that negotiations with Queensland Rail will soon resolve the problem of finding a safe crossing point of the railway line so that the long-standing plans to make this area more widely known and accessible will at last proceed. In the meantime we were fortunate to have this preview and appreciate Mark’s willingness to show us around.

Thanks to our photographers, especially Malcolm and Melissa.To view Melissa’s complete folder click here – then select “play slide show” or click through individual images. Thanks also to Julia, Beth, Denise and others for help with the bird list (below). 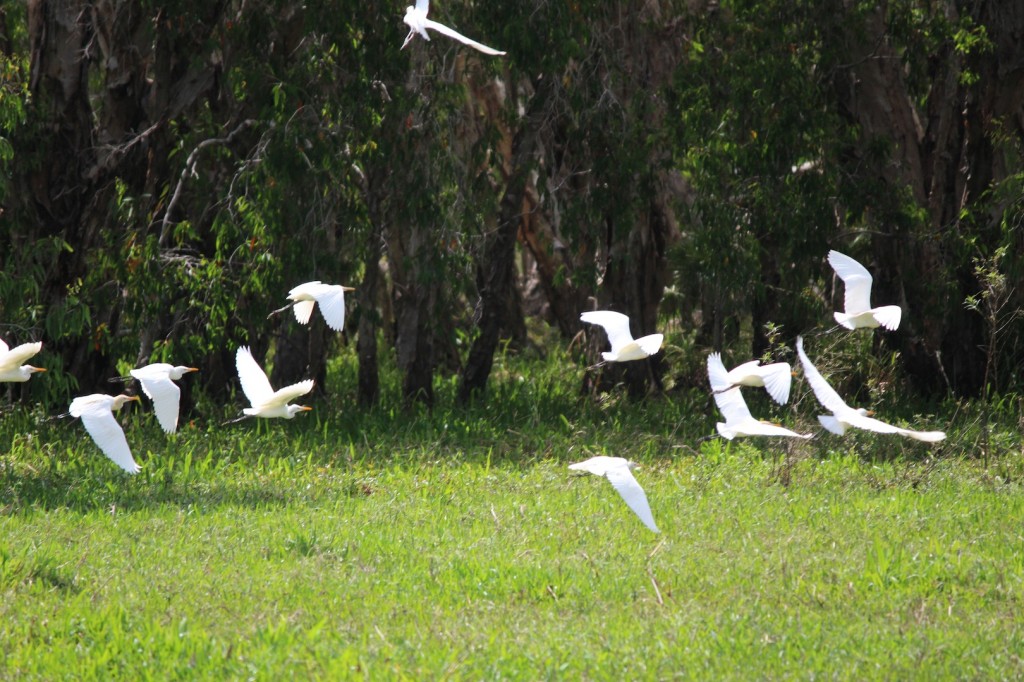 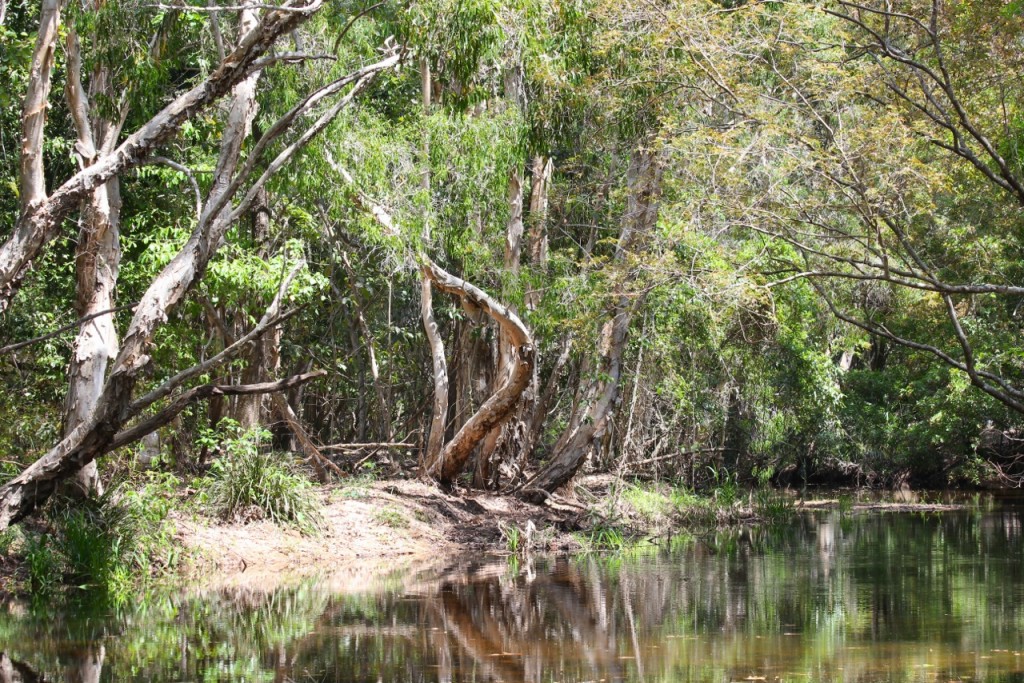