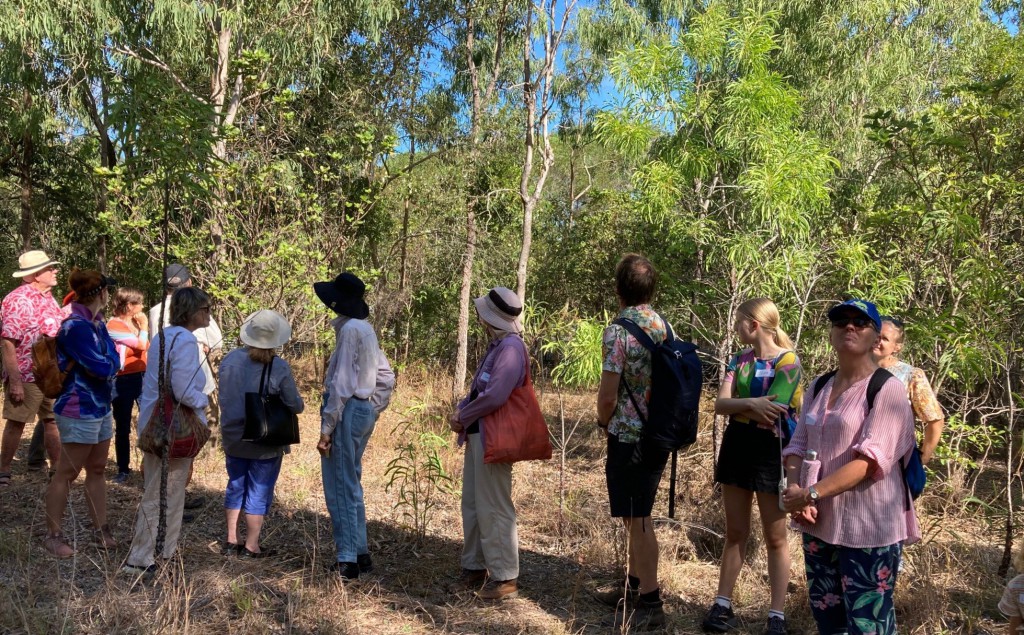 A walk round the lower loop of Claude’s Block. (All photos by Liz D)

Less than 18 months ago the Magnetic Island Nature Care Association (MINCA) launched its bid to raise $400,000 for the purchase of the 5.33ha block of land, roughly half-way along the West Point road, known as Claude’s Block. If successful this extraordinarily ambitious plan would see a valuable area of native bushland (and key koala habitat) linked to other protected, publicly and privately-owned land nearby, as well as to the National Park, whose border runs along the back of the block.

To an outsider it seemed an impossible task, but by reaching, and indeed exceeding, the total in just a few weeks, they showed what the power of bold and optimistic thinking, combined with expert community outreach, can achieve. Something surely that all conservation groups should aspire to.

On 15th October MINCA members, supporters and donors were invited to the celebrations – and what a celebration it was! Over one hundred turned up by various means with mainlanders being chauffeured from the ferry terminal to the block, where an enticing mix of exploration, education and entertainment had been planned. 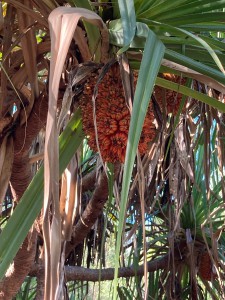 Some of MINCA’s key figures (thanks Gethin, Charlie, George and Peter) took us in groups around different parts of the property, explaining how the hydrology, terrain and soil composition influences the vegetation. For example, towards the back of the block we saw how a grove of tall paperbarks has grown up in a shallow depression where water accumulates after rain; closer to the road on an ancient dune, formed thousands of years ago when sea-levels were higher, pandanus are thriving on the sandy soil..

It was astonishing to learn that, up until the mid-1990s, the entire block had been stripped of almost every tree and was basically reduced to bare pasture, stocked with cattle and water buffalo for a CSIRO research project. Once that ended and the cattle were removed, nature was allowed to revegetate at her own remarkably rapid pace.

Dominant tree species from the Corymbia, Eucalyptus and Melaleuca genera now form a tall shady canopy over most of the property. One impressive old bloodwood, which had escaped previous clearing, caused me to contemplate how those poor cattle must have loved its shade. Many smaller plants, like lilies (Crinum sp.) and the native gardenia, are also now thriving.

Unsurprisingly, weeds introduced by the cattle also flourished but evidence of MINCA’s eradication efforts could be seen everywhere. It was a beautiful, inspiring and indeed a joyful experience to wander the tracks in the late afternoon light, against the backdrop of the steep, wooded hillsides, in the company of such knowledgeable and enthusiastic guides. 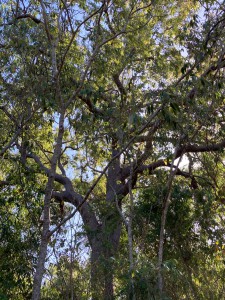 In between the walks we had beautiful music from gifted young cellist, Evan Hodgson, and a talk from passionate local birder, Chris Corbett, before enjoying a wonderful supper accompanied by great local trio, Random Sass. As the stars came out Peter regaled us with hilarious tales of West Point adventures from his (misspent?) youth, Chris challenged our knowledge of nocturnal bird calls, while Charlie, Gethin and George gave us more of the human and natural history of the Island and this very special slice of it.  And for anyone who thought the Forts area was the place most favoured by the Island’s koalas – think again! A recent survey showed that the area of greatest population density was right around us. Given the parlous state of this iconic animal elsewhere in Australia, efforts to protect them and their habitat on Magnetic Island take on national significance.

Finally, Random Sass were back to wrap up the night and get young and old up on their feet and dancing. All credit to MINCA for a fabulous event, superbly organised. The long-ago words of the late John Sinclair, that champion of Kgari/Fraser Island and many other battles,  came back to me: Conservation is fun!  Yes, despite the setbacks and hard grind, it certainly can be – but it is also hope. And MINCA have shown us what both look like. Well done – and thank you!

You can read more about MINCA, their work generally, and about Claude’s Block with many more (and much better) photographs on this site. Their membership is not confined to islanders, so regardless of whether or not you are able to participate in their activities directly, do consider giving them your support as a member or donor. 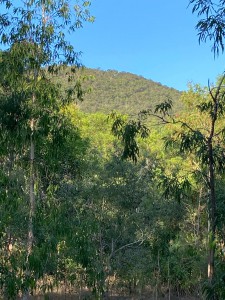 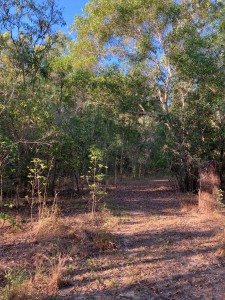 Track around the top of the block