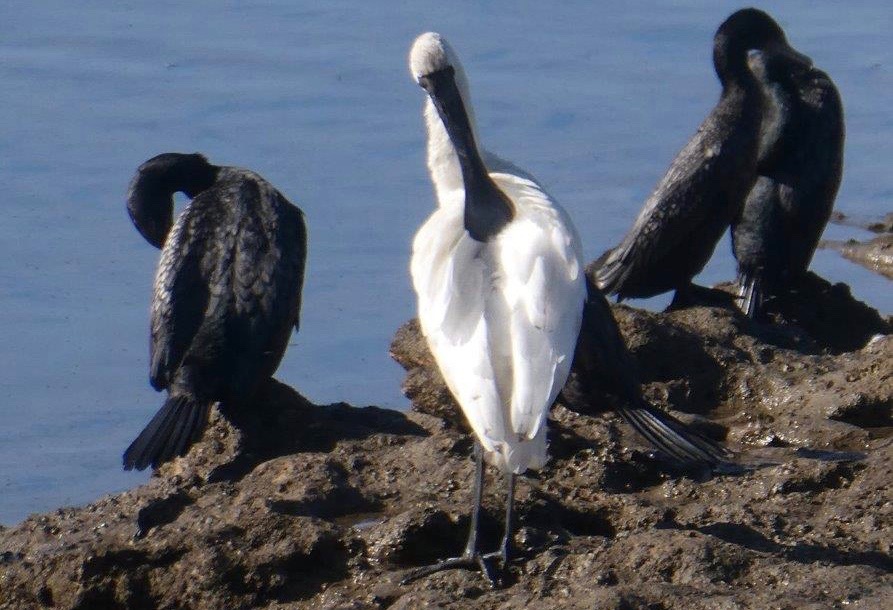 This trip we were joined by two members from the Dawson Branch of W.Q. who were visiting Townsville at the time. It was interesting to hear what is happening in other branches in different environments. As we walked from the car park towards the river, Bicentennial Park on our right contained a number of masked lapwings and a solitary magpie. The river itself was much more interesting. An area of mud above water level had a crowd of little black cormorants, a royal spoonbill and great egrets, and much preening was happening, while further away there were a few Australian white ibis. 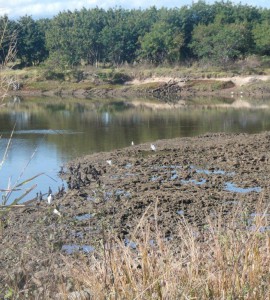 While we stayed back not wanting to disturb them, a few cormorants flew off downstream and so we walked off down the path. The whole way beside the river the loudest and most conspicuous calls were made by brown honeyeaters, though no one managed to see one until the end of the riverside part of the path. Here one was seen in a eucalypt in which people were looking for the yellow honeyeater they had just heard. In a Peltophorum growing in the mixed weeds between the mangroves and the path, an almost mature magpie occasionally made a short quiet call while, among the outer branches, a brown honeyeater almost drowned it out. 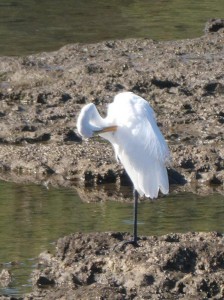 Avicennia was the most common mangrove, though there were a couple of trees of a different species among them, possibly Excoecaria. (It wasn’t easy or desirable to head off the path into the mangroves to verify identification. The grass, trees and weeds on the river bank are helping hold an unstable bank together. As the area was once a landfill site, the Townsville Council has needed to shore up the bank in the past when old rubbish started falling into the river.) A mangrove gerygone was heard briefly. A kingfisher sat on an exposed branch long enough to be identified as a sacred kingfisher and a few rainbow bee-eaters were around. Someone managed to see a white-gaped honeyeater.

The grasses both sides of the path attracted double-barred and zebra finches, as well as the introduced spice finch, and golden-headed cisticolas appeared and disappeared into the longer grass. Two female red-backed fairy wrens were spotted. (A male would possibly be in eclipse plumage in winter.) Also working right beside the path was a Tawny Coster butterfly; this was recognised a few years back as a new arrival and is now found over most of northern Australia. Originally from India and Sri Lanka, they migrated across south-east Asia before invading Australia, presumably by air, not by boat.

Two larger birds flying upstream caught our attention and they obligingly changed direction and flew towards and over us, so we could see they were ospreys. At various times there was a whistling kite, a black kite and a brahminy kite overhead, and a number of welcome swallows much closer to the ground.

As  the path veered away from the river, the tide was still not far enough out for more exposed mud to attract birds unfortunately. A great egret perched on the other side of the river and a caspian tern flew over, but nobody wanted to linger and we all just walked the rest of the circuit back to the carpark, hearing only a cuckoo-shrike along the way. 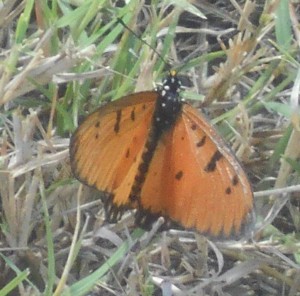 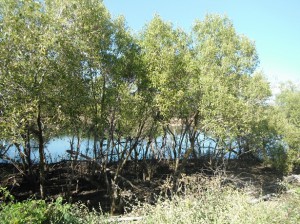 Copyright of photographs in this post resides with the photographers. Contact us if you wish to request permission to use an image.