The annual Pied Imperial-Pigeon (PIP) counts on North Brook Island entered their 56th season in October 2021 yielding an unexpectedly high total of 22,261 birds. In November this fell slightly to 21,916. The following is an edited version of the trip report for the December count –  the month when numbers are usually at their peak. 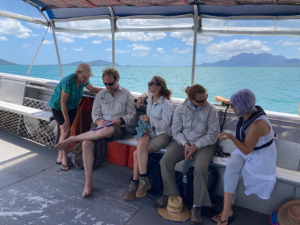 On this day the 13 participants aboard the barge Njinjilke  included 2 from Marine Parks and volunteers from a range of backgrounds, but all with a shared interest in these most beautiful of our summer migrants. It was a choppy trip across Rockingham Bay, with plenty of whitecaps on the water, but by the time we passed Goold and Hinchinbrook islands, the breeze had lessened.

For those on the lower deck, the angle of the barge’s raised ramp performs the trick of concealing the Brooks themselves, lying directly ahead – so it is only when we are almost there that the islands suddenly appear. As one volunteer commented, it is always a moment which lifts the heart.

As we came to anchor, we could see about 100 crested and black-naped terns nesting above highwater mark on the Spit. Both groups periodically took flight, wheeling around in the air to create a snowstorm effect against the green of the forest. 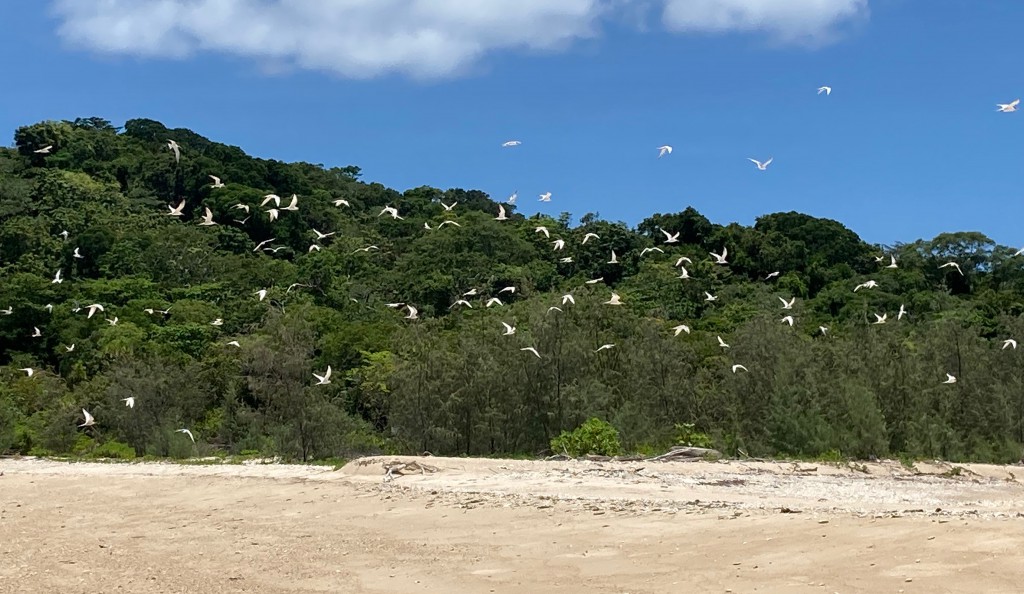 A snowstorm of terns swirls against the forest.

After having lunch on the boat, we gathered hats, water bottles and rubbish-collecting bags before disembarking. Only the Marine Parks staff approached the terns close enough to make an assessment of the colony, while the rest of us were careful not to disturb them. Smaller numbers of both bridled and roseate terns were seen by those who made it as far as the southern point of the island. 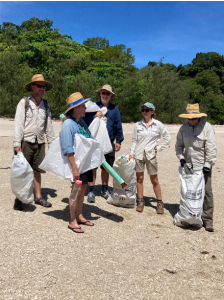 The rubbish collectors and their haul

Some of us headed eastwards along the north-facing beach, hoping to photograph the pigeons coming down to the beach to drink. This has been reported previously from this and other locations, though it seems most unusual behaviour for a non-seabird. Unfortunately only one bird appeared before it was time to pack up and return to the boat but at the far end of the west beach some birds were observed coming down to rock-pools that, surprisingly, were only slightly brackish.

Part-way along the northern beach, I paused to photograph a stand of Pisonia grandis before returning to the main beach. (These trees produce sticky, barbed seeds which can cause death to birds that get the seeds entangled in their feathers. In October one volunteer photographed a forest kingfisher that had come to just such an end). By the time I reached the main beach the main party had already progressed along its length and rounded the island’s southern point, where they not only collected several large bagsful of debris, but also saw a number of green turtles and found evidence of ten turtle nests.

One of us photographed the mound of an orange-footed scrub fowl and also saw a large goanna, tentatively identified as a yellow-spotted monitor, which has been recorded on Hinchinbrook. This prompted thoughts on how such reptiles, not known for their long-distance swimming abilities, find themselves on islands many miles off-shore. Escapees from a raptor’s talons, perhaps? Or washed there by storms, clinging to life-rafts of sticks or other flotsam? Two sting-rays and two reef sharks were the only other non-avian fauna seen. Other birds spotted were a solitary beach stone-curlew (known to nest on the island), a grey-phase reef heron, the usual white-breasted wood-swallows, metallic starlings, a kingfisher (too fast for identification) and two raptors: an osprey and white-bellied sea eagle. 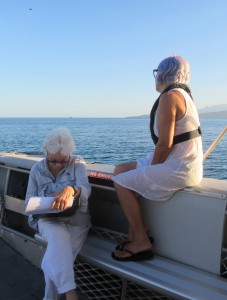 The pigeons were slow to come in when the count started at 3.30 and there were lengthy periods of gazing at an empty sky, punctuated only occasionally with calls from the counters.  At the end of the first hour only 67 birds had been counted, the next half-hour saw 146 birds, but from 5.30 the pace picked up rapidly. As has become almost the norm there was a marked imbalance between the northern and southern approaches. On this occasion the numbers arriving via the south accounted for over 75% of the total.

As the light was beginning to fade, a disturbance in the water a little distance from the boat alerted us to two turtles responding to the romance of the moment with some robust turtle love-making – suggesting that in a few weeks’ time there would be fresh tracks in the sand on one of the island’s beaches and (dare I suggest) the patter of tiny flippers?  With birds still flying in, and just enough light to see them, counting continued until 7.15pm. Then it was time for the precious count sheets to be safely stowed and for us all to prepare for the return journey. The light breeze meant a flat sea and a fast trip.

Over the following week the task of adding up all those columns of figures was completed, yielding a final total of 17,757 – less than we might have expected for this month and nearly 4000 fewer than November’s total. Given the high October total, it is fair to assume that the birds arrived early to start their breeding season, and were therefore departing earlier than usual.

Nonetheless, after an initial bounce-back in the 2012-13 season, the ‘failure’ of the birds to reach the numbers recorded in the decade or so before Yasi struck in 2011, remains puzzling: the peak having seemingly plateaued at approximately 8,000-10,000 fewer than the pre-cyclone totals. This is the subject of research by Dr John Winter, a counter since 1981, but only ongoing monitoring will provide the data needed to arrive at an answer, and only ongoing monitoring can help keep the colony safe.

The December 2021 count was funded by the Thorsborne Trust through a grant gratefully received from the Wettenhall Environment Trust. This covers the cost of the boat for the day, volunteers cover their own costs of travel or accommodation as required.