This update was sent by email to members and supporters last August (2019) because of the unavailability of our blog. It is published retrospectively as part of the process of bringing our blog up-to-date.

Welcome to our new members! A warm welcome to Linsey, who joined the Branch in May, and Darrie who joined in July – happy to have you on board. Thanks also to those members who responded to our renewal reminders, and those who renew even without reminders – you are gold! I will endeavour to catch up soon with any others who need reminders.

August Field Trip – Sunday 25th – Magnetic Island: This month we will visit Magnetic Island for a gentler walk than last year’s hike over the hills from Florence to Horseshoe Bays. Catch the 7.45am ferry from Townsville and take the bus to the Forts stop. From there we will take the walking track to look for koalas and other wildlife on the way to the Forts. Bring water, food, hat, sunscreen etc.

Vale Tony Routledge: In June we learned of the passing of one of our very active members from the 1980s and 1990s. Tony became the sixth editor of our print newsletter, Brolga, taking on the job when new to the Branch in 1985 soon after arriving in Townsville. He continued in this role without a break until 1998 – our longest-serving editor by far. Over that time he edited and produced the print issue of Brolga, for ten months of the year, never failing to have it arrive in our mailboxes (real, not virtual) in time to advise us of that month’s upcoming activities. He found much interesting copy to include from his own reading, sought out contributions from local naturalists, and always managed to squeeze in that last minute article or announcement. When JCU could no longer take on the printing and collation tasks Tony cajoled local MPs into allowing him to use their facilities to print and assemble over 100 copies each month, assisted by our current treasurer, Jane McLean.

Tony and Ros were regulars at our monthly meetings and field trips. He was a wonderful birder and loved to talk birds with anyone who shared this interest and loved even more to go off on birding and camping adventures with Ros. He had a keen intelligence, was widely read and took an astute and active interest in politics at all levels. Indeed it was hard to find a topic that Tony could not converse on, with considerable authority. In 1990 Tony performed a particularly valuable role for the Branch by alerting members to a contentious issue, which threatened to bring division and resignations, and encouraging open and informed debate that eventually led to resolution. Declining health brought an end to Tony’s birding adventures but he was most lovingly and staunchly cared for by Ros, to whom the Branch offers its condolences.

Could this Toolakea proposal ride roughshod over the environment? Last month we learned of a proposal to create a country club resort and equestrian centre on land behind Toolakea Beach. Four of us visited the site (or as close as we could get without trespassing) with NQCC’s campaigns director Tarquin Moon. We co-operated with Tarquin on a joint submission designed to strengthen the terms of reference for the Environmental Impact Statement (EIS) that will be required from the proponents. If approved this large project will take over 20 years to complete and will impact on a sensitive area of relatively undisturbed and weed-free native woodland, wetlands and foreshore vegetation. Plans show that the project will inevitably involve loss of habitat, and likely disturbance of shorebirds and turtle nesting sites, and has the potential to contaminate the GBR and reef lagoon. We need to ensure the EIS is as rigorous as possible. 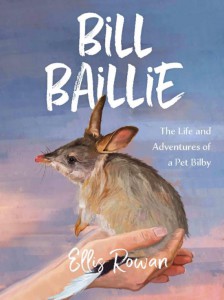 Meet the beguiling Bill Baillie:  Are you a bilby lover? Do you have children in your family interested in wildlife? Some years ago I came across a delightful little book, Bill Baillie, rather surprisingly written by the celebrated Australian “flower-hunter” and botanical artist, Ellis Rowan (1848- 1922). Why had this intrepid adventurer written what seemed to be a children’s book about a “bilboa” (as bilbies were then known)? It turned out that, when staying at a remote miners’ camp in WA searching for new flowers to collect and illustrate, she was given an orphaned bilby after its mother was killed in a trap.

Dubbed Bill Baillie, he became Ellis’s constant companion having many adventures. First published in 1908, the book has been out of print for decades but this new edition will bring readers of all ages laughter, a few tears and many insights into Australian life in a time long past. A new supplement gives information about these beautiful animals and how to help them and other native animals in distress. My copy came from our wonderful independent bookshop, Mary Who? Why wait till the Easter bilby scampers into our consciousness? Treat yourself to a spring or a Christmas bilby!

Our Mahogany Glider project is well and truly on track again with problems of rain-affected cameras resolved and a washed-out creek crossing repaired. The team is hoping to focus more on the land south of the creek, including the Council’s small nature reserve, where we already have one glider record from late last year. If we can solve the problems of access for more than a small group it would be good to arrange another field trip onto the site to allow more members to view the area and see what the group are doing. It really is exciting to know that these rare animals are living within our city’s boundaries – but also a huge privilege and responsibility. 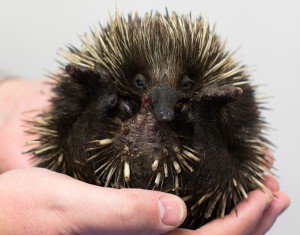 Echidnas on the move! If you are walking on Castle Hill or the island, or driving anywhere, do watch out for echidnas. The RSPCA has sent out an alert following the increased number of echidnas being brought into their care. This is the breeding season for these usually unobtrusive monotremes, meaning they are more likely to be out and about. A rare sight is the strangely named “echidna train” when several males will attach themselves in a line, nose to tail, following a single female, usually with the largest male at the front and smallest at the rear. This suggests the behaviour favours the dominant male who will literally be first in line when the female becomes receptive. Tough luck if you’re a little ‘un.

If you do see an echidna, try not to interrupt or divert its progress. Obviously if one is trying to get across a road and is in danger then you should try to assist it to cross safely – as long as it is safe for you to do so, of course. As with all wildlife, If you find a sick or injured echidna please call NQ Wildlife Care on 0414 717374 or the RSPCA hotline 1300 ANIMAL.