This update was sent by email to members and supporters last June (2019) because of the unavailability of our blog. It is published retrospectively as part of the process of bringing our blog up-to-date.

June Field Trip Sunday 23nd – Mt Marlow, Many Peaks Range: This month we will return to the Town Common to do a favourite walk from the Freshwater Lagoon to the summit of Mt Marlow. We will meet at the far end of the road through the Common (near the Freshwater bird hide) at 9am. Leaving the cars here, we’ll walk across the bund wall to Bald Rock and then follow the track as it climbs up through open woodland and vine thickets to the grassy summit of Mt Marlow with fantastic views in all directions. We will return the way we came, hopefully back at our cars around midday.

Federal Election 2019 – what can we say? Yes, most of us probably expected a different outcome and the hope of a government with a little more respect for our threatened wildlife and a greater sense of urgency to protect our biodiversity, now at breaking point. Depressingly, what we’ve got is more of the same. But crawling into a hole and putting hands over eyes and ears for the next three years achieves nothing so let’s all make sure we keep watching, listening and acting to protect our precious animals, plants, habitats and ecosystems, on land and water. They are still, more than ever, worth fighting for. One way to start making your voice heard is via BirdLife Australia’s petition [Link expired] for that beleaguered, little finch. Please also store these  email addresses so you are ready to contact our leaders on environmental issues:

Vale Frank Manthey and Peter Hitchcock: two conservation champions.
Last month brought news of the passing of Frank Manthey OAM, one of the “immortal” Bilby Brothers. The other half of this remarkable duo, Peter McRae, died last year. Frank had a long career as a National Parks ranger before dedicating himself to the cause of the Greater Bilby (Macrotis lagotis) and its habitat in western Queensland. 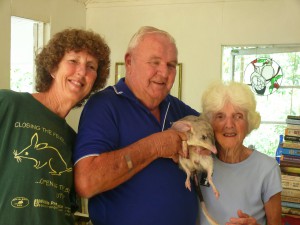 Frank and Peter established the Save the Bilby Fund in 1996, launched the appeal to build Currawinya’s Bilby fence in 1998, and opened it in 2003. Frank made countless trips to schools across the state where he enchanted children by introducing them to a live animal they could see and touch at close quarters.The “bilby brothers” spear-headed the Easter Bilby campaign, bringing the animal to national prominence; in 2005 Frank successfully lobbied the Federal Government to create a special National Bilby Day, celebrated each September. Frank’s deteriorating health never diminished his love for these animals, his extraordinary passion for our unique wildlife or his never-give-up attitude. Just two weeks before his death he travelled from Ipswich to Sydney to meet the inspirational Jane Goodall – what a meeting of minds and kindred souls that must have been! We have lost a wonderful Aussie hero who will be hugely missed. (Photo of Frank with Suzie Smith, Margaret Thorsborne and Lester the bilby, courtesy of Daryl Dickson)

Just 24 hours earlier we had heard of the loss of another great conservation champion and the first Director of the Wet Tropics Management Authority, Peter Hitchcock. Peter was also a great inspiration on Tasmanian, Wet Tropics and Cape York issues, established many new protected areas in NSW, and had a huge impact on conservation efforts across the country. He played a lead role in successfully making additions to the Tasmanian World Heritage area in 2013, which included his beloved tall eucalypt forests – and then defended the forests against proposed de-listing by the Abbott government. Peter’s efforts in the 1987 Helsham Inquiry led to World Heritage listing of the Tasmanian forests and his international work in Indonesia, West Papua, Papua New Guinea and many parts of Asia is widely recognized. Peter was always ready to take on both local and international campaigns while lending support and advice to a wide network of conservation activists who will feel the loss of this forest giant greatly. (Adapted from tribute by Kerry Trapnell) 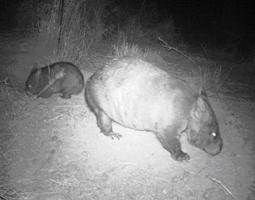 Northern Hairy-Nosed Wombat project: Do you have a month to spare to help the hairy-nosed wombat in Western Queensland? Volunteers are needed to conduct the daily on-site duties for managing sites at Epping Forest NP (near Clermont in western Queensland) and Richard Underwood Nature Refuge (near St george, close to the NSW border). Project leaders have vacancies on the last months of 2019 but are also recruiting for 2020. (Qld Government photo of mother and joey at Epping Forest National Park)

Many of our members are also members of our local conservation council – that’s as it should be. But if you have not received news of their busy June calendar, here are the highlights (and do visit NQCC’s website for how to join (only $20!!) and other information).

WQ Field trips coming up on July 21st and August 25th: We are considering a repeat of last year’s whale-watching trip with SeaLink if enough people show an interest. Like last year this would mean making your own booking with SeaLink. Please visit the Sealink site for details of prices and let us know asap if you would like to do this. Alternatively, or additionally, a trip north to walk the eastern section of the Dalrymple Track is something we haven’t done for a number of years. It involves a climb from Damper Creek (10 km south of Cardwell) to the historic culvert and ridgetop of the old track, returning the same way. This walk is best done before temperatures warm up!

Your Branch at work: Since our last update we have made 4 submissions: on the Cape Hillsborough commercial wildlife viewing plan; on a review of flying-fox roost management guidelines; on an application by the local council to disrupt a nationally significant spectacled flying-fox roost in Cairns; and on threats to Melaleuca viridiflora woodlands in our region. Emails/phone calls have gone to the Qld Premier and Environment Minister, Leeanne Enoch, regarding the rushed process of environmental approvals for the Adani mine.

Boggy conditions have restricted trips to our mahogany glider project site but Beth and Denise travelled to Cardwell this week to discuss mapping of our sightings with Daryl from the recovery team. We produced a new mahogany glider information leaflet and Liz gave a talk about the gliders at Ecofiesta’s speakers’ stage.

At our last committee meeting we welcomed the presence and contributions of three non- committee members. We are trying to establish a schedule of holding these meetings on the first Monday of alternate months, making the next one due on August 5th. If you are interested in attending please let us know so that we can confirm details of date, time and venue.