The February outing planned for the same area was cancelled after heavy rain made the site inaccessible. March looked like a possible repeat performance with rain every night the week before, however the rainfall totals were much lower this time and the days were fine, so we went ahead. The access track through the private property turned into a bog soon after the gate, so we abandoned the cars and proceeded to meander and squelch our way through mud and water towards the part of the project area which is freehold land. The TCC reserve and the state land which will be the main focus of our search for mahogany gliders were too far to walk to in a morning, especially under sodden conditions. 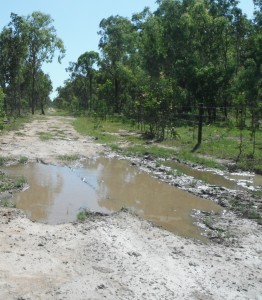 The vegetation of the area is open woodland with the bloodwood Corymbia clarksoniana, C. tessellaris, Eucalyptus platyphylla, Melaleuca viridiflora and several species of Acacia the dominant trees. Birds were conspicuous, as were the cows and horses, the latter coming close and expecting snacks.

The area also hosts various lengths of rusty barbed wire left lying around when the lessee built new barbed wire fences, and innumerable bottles discarded by people who used to access the beach in 4WDs and quad bikes and camp there. Not long after the property was fenced to keep vehicles out as much as keep cattle in, Tangaroa Blue did a cleanup of some of the beach areas where the rubbish was most dense, and volunteers collected hundreds of bottles and cans, broken chairs, eskies, and all the usual mess that people tend to litter any natural environment with around here, but stuff flung from cars into the bush was not collected. Picking up a bottle or two on each trip seems pointless given the huge area, but over at least 20 visits may have an effect. 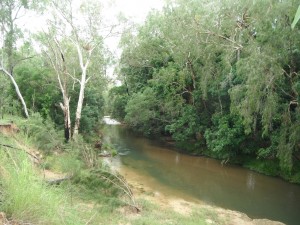 We walked down a track to the creek which was still flowing fast and noted the eroded track on the other side looked worse than when we crossed the creek here before all the rain. It was an attractive place to sit and have a snack, though a pylon for the high voltage powerline close by ruined the beauty a bit. Showers were predicted for the afternoon so we’d planned to finish the walk by noon. We were delayed along the way by a number of small birds in Acacias and Melaleucas beside the track, sometimes several different species in the same tree. This caused momentary confusion as people gave different identifications before realising they were looking at different birds close to each other. (Bird list below.) 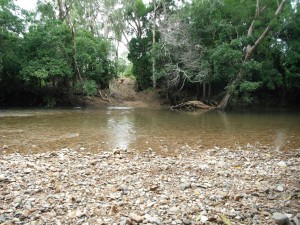 Once the ground dries out, there’ll be other walk-throughs of the rest of the project area and along the beachfronts north and south of the creek mouth. We will also be setting sensor cameras throughout the entire area and spotlighting monthly in hopes of confirming the presence of Mahogany Gliders here.