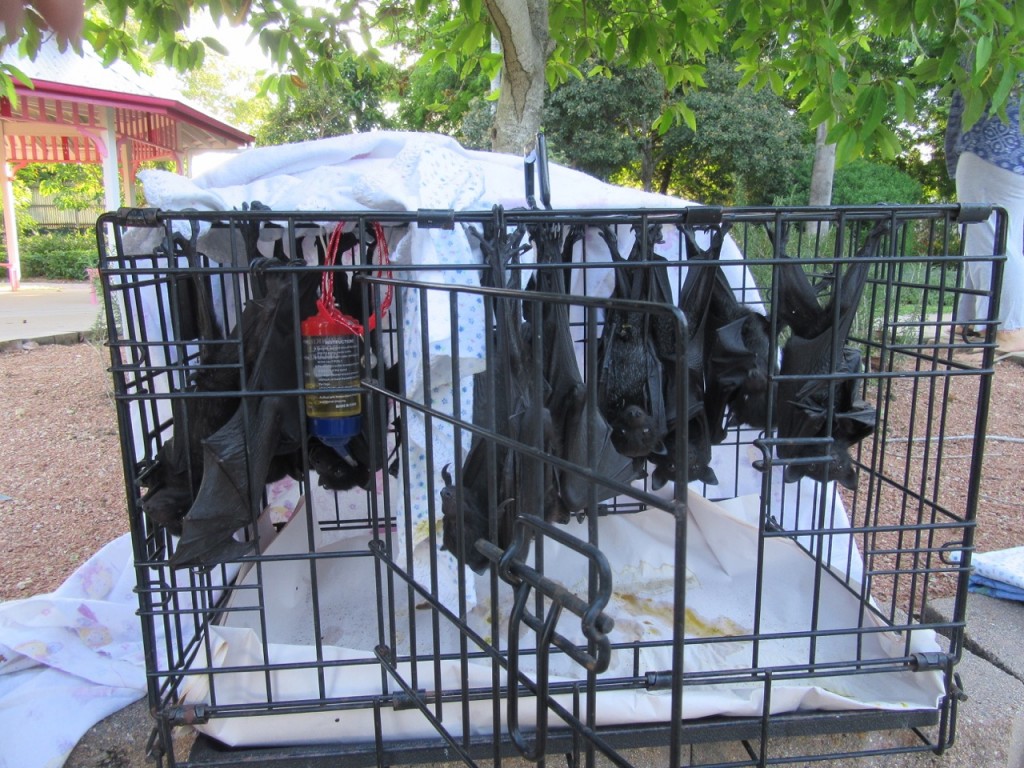 The above collection of gorgeous black flying-fox pups were among twenty rescued from Dan Gleeson Gardens by wildlife carers on the morning of November 4th. All had been found under or near the creche tree: a large fig away from the main roost in which Mums deposit their babies before going out to feed for the night. For reasons unknown they were not reunited with their Mums at first light and only the quick intervention of the carers saved them from distress, dehydration and death. 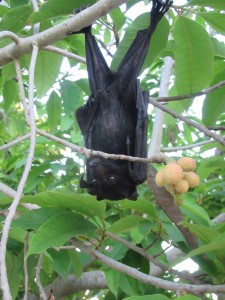 One of the “lucky”ones – rescued by carers.

As we reported last month, the large numbers of babies being found in distress in the Gardens (some too far gone to be saved) as well as many dead and dying adults is of great concern to carers. When the City Council began its actions to prevent re-establishment of the Palmetum colony in June, we feared that keeping the colony at Dan Gleeson Gardens could place unacceptable stress on the animals. These Gardens are generally too small for a large colony, provide little protection from the elements or predators and have limited access to water for drinking or cooling (the shallow lagoon is full of algae). And, as well as being actively prevented from seeking out their former safe and healthy Palmetum roost site, some dispersal actions have also been taking place at Dan Gleeson to keep the bats away from a nearby aged care home. (NB Late advice that the action at Dan Gleeson Gardens had been discontinued was received 23/11)

We cannot be certain of the cause of this constant stream of casualties and fatalities – of 141 recorded so far, half were found dead or died soon after rescue – but carers consider the numbers completely disproportionate to the size of the colony and quite unlike their experience at undisturbed colonies in and around Townsville, even those of the same size or larger. If heat is a factor, as has been suggested, this does not exonerate the Council from responsibility as the Gardens expose the bats to greater risk of heat stress.

It should be pointed out that many more bats are dying than are being found and recorded by NQWC. For example they have no information on the number of being bodies found and disposed of by Council staff, nor of any occurring outside the Gardens’ perimeter. Others are never found – abandoned babies that die high in the trees or fall into thick vegetation or leaf litter decompose, through heat and natural predation, too quickly for discovery. When these unrecorded deaths are taken into account it is estimated that about 10% of the colony may have been lost already.

This is bad enough – but when the stress and suffering of infants dying from dehydration, or of mothers who cannot find their babies, is taken into account, it becomes unconscionable.

We continue to express our grave concern to the City Council, and have advised DEHP in Townsville and Brisbane that the dispersal actions should be considered as a likely cause of the increased mortality and should cease during this season of birthing and pup-rearing – but with silence or non-committal responses. It is sad to reflect how things have changed since former Deputy Mayor, Vern Veitch, received a standing ovation at the Australasian Bat Society Conference in Townsville when he said “The Townsville City Council policy on flying-foxes is to leave them alone.”

After rest and rehydration the 18 babies pictured above were taken back to the Gardens in the hope that some at least could be reunited with their mothers. I watched as the carers gently hung them on the branches of two small trees near the creche tree. It seemed a bit like hanging decorations on a Christmas tree – except that these decorations liked to clamber about and choose their own position! Sadly, on this occasion, happy family reunions were not to be and they will remain in care, along with many others, until able to fend for themselves. 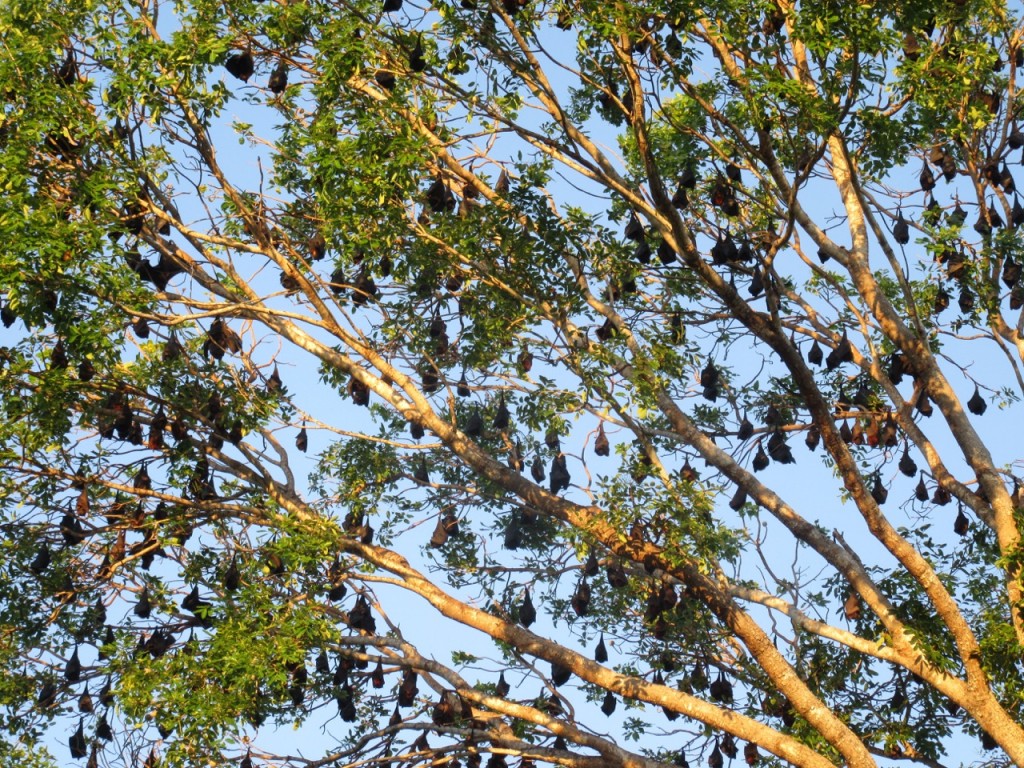 Black flying-foxes hanging out at the Gardens, a smaller number of Little Reds are also present.