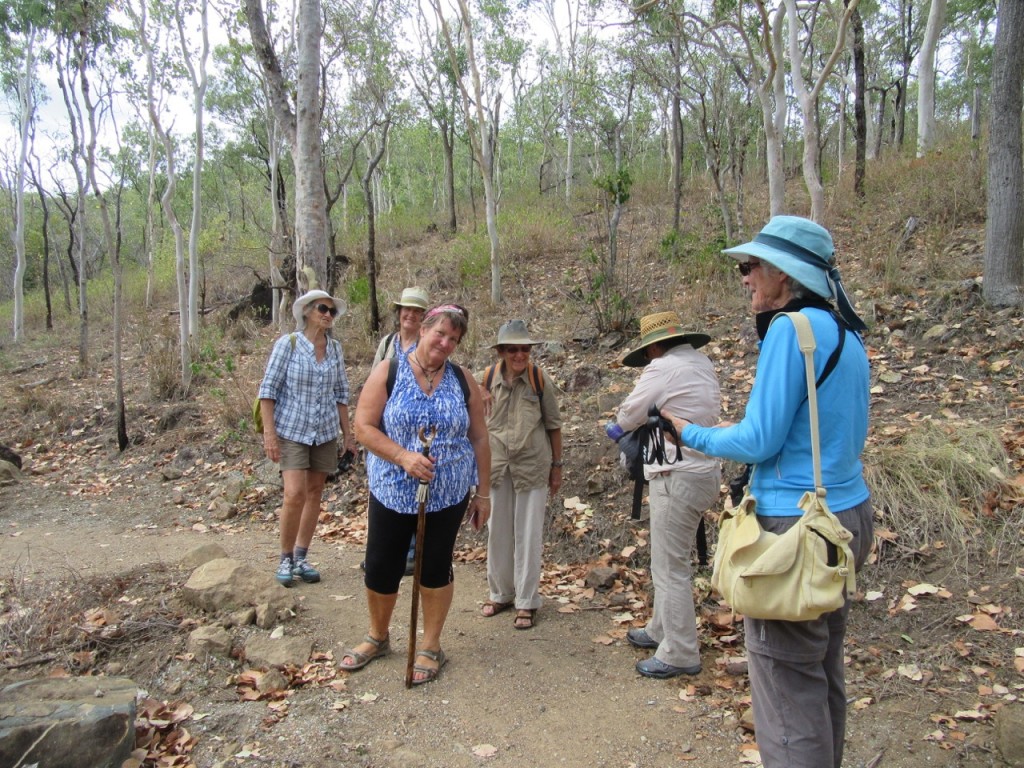 Away from the creek, the terrain was very dry. Photo Liz Downes.

At just 20 minutes drive down the highway the Mount Elliot section of Cape Bowling Green National Park is, for most of us, the easiest national park to access – so four years after our last branch trip, it was high time for a visit! A group of twelve assembled at the picnic area and, as we set off on the walk to Cockatoo Creek, we collected a Victorian holiday-maker, who was interested to learn from us about the local birds and plants. 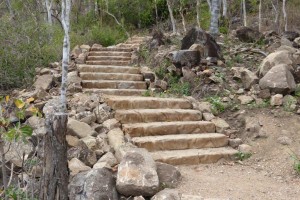 The track has been rebuilt in recent months with steps (made to look like natural stone) on some of the gradients helping to reduce erosion. Walking was easy, with refreshing glimpses of Alligator Creek below us although the terrain around us was very dry. Eucalyptus platyphylla (poplar gums) were dominant with most of their outer bark shed, revealing the sensuous creamy-white contours of their trunks. Several were in full flower, though their creamy blossom was less conspicuous than the brilliant yellow flowers still clinging to native kapok trees, or the scarlet of one bottlebrush defiantly flowering long after all its fellows. 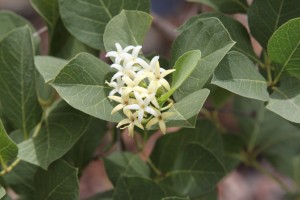 The junction of Cockatoo and Alligator Creeks is the perfect place for a short break and the pools here would be very inviting after rain. The botanists and would-be botanists had plenty to look at and a fairly extensive list follows. Apart from those already mentioned, some plants that caught my eye were: a male specimen of Cycas media with its distinctive cone, the dark fruit of the native olive, and the delicate flowers of Coelospermum reticulatum. Two non-natives noted were the blue snakeweed (Stachytarpheta jamaicensis) and the caustic creeper (Sarcostemma viminale). 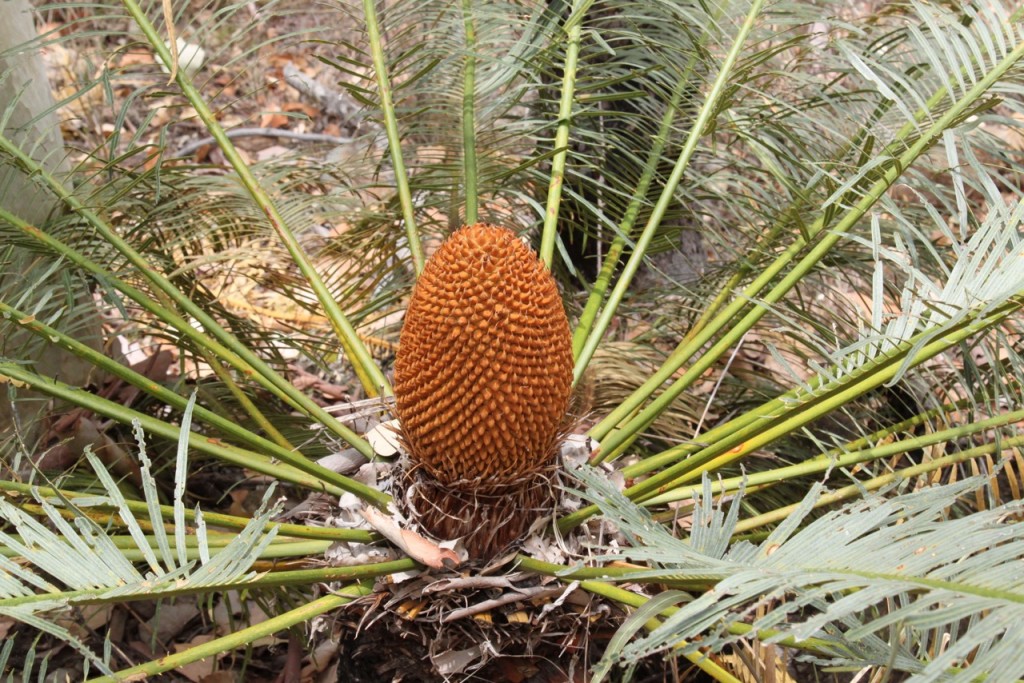 A cicadabird, with its distinctive dark plumage, was calling in the trees above our heads, and several honeyeaters were either heard or seen. The brown-backed loves to haunt creek banks (and builds its nest over water), and the calls of Lewins, yellow and yellow-spotted honeyeaters were all unmistakeable. Those of us who persevered further along the track also heard the noisy pitta’s “walk-to-work” call coming from the denser vegetation bordering the creek. If you are surprised to see magpie goose and black cormorant on the list below – both flew over our heads while we were at the creek, in search of a decent body of water no doubt. Surprisingly the one bird that didn’t show up was a cockatoo! 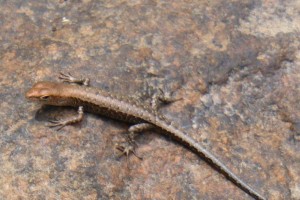 Two attractive skinks were observed and photographed by Pam and Margaret: a striped snake-eyed skink (Cryptoblepharus virgatus) and a saxicoline sun skink (Lampropholis mirabilis) – the latter is listed as “near threatened” in Queensland. Of the insects Pam identified a species of fly (Sarcophaga sp.,) and a sand wasp (Bembix sp.). I’m ashamed to say we made no notes of the butterflies although there were quite a few around.

Along most of the track there was plenty of evidence of the presence of horses so it was no surprise to meet a mob of about twelve. Looking in good condition, they were under the command of a very protective stallion, anxious to keep the mob together. Horses can cause a lot of problems in national parks but getting them out of one with such rugged terrain has proved particularly difficult.

Species lists for birds and native plants follow. Though aware of the pitfalls, I have included common names for plants (where available) as for some of us they are more familiar than the scientific ones. Thank you to all who helped with identification – especially Pam, Beth, Carole, Jane and Denise.Please note that a ? before a species name indicates the identification was uncertain. Do take a look at the file of photographs from Liz, Margaret and Pam, which includes many of the species listed below, as well as more general shots. It can be viewed via this link. Please note that copyright of images resides with the photographer. 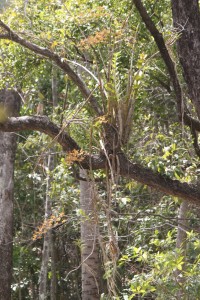 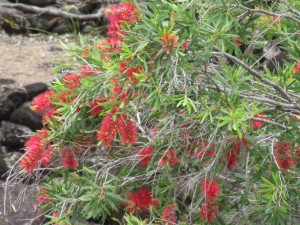 And here are the plants: 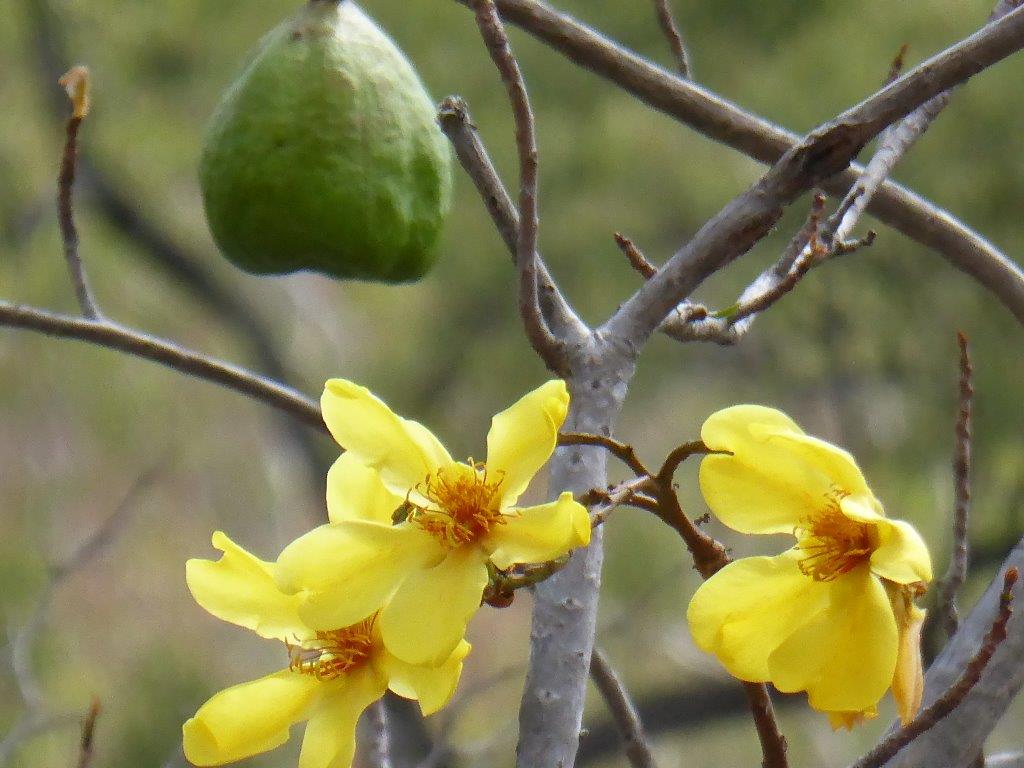