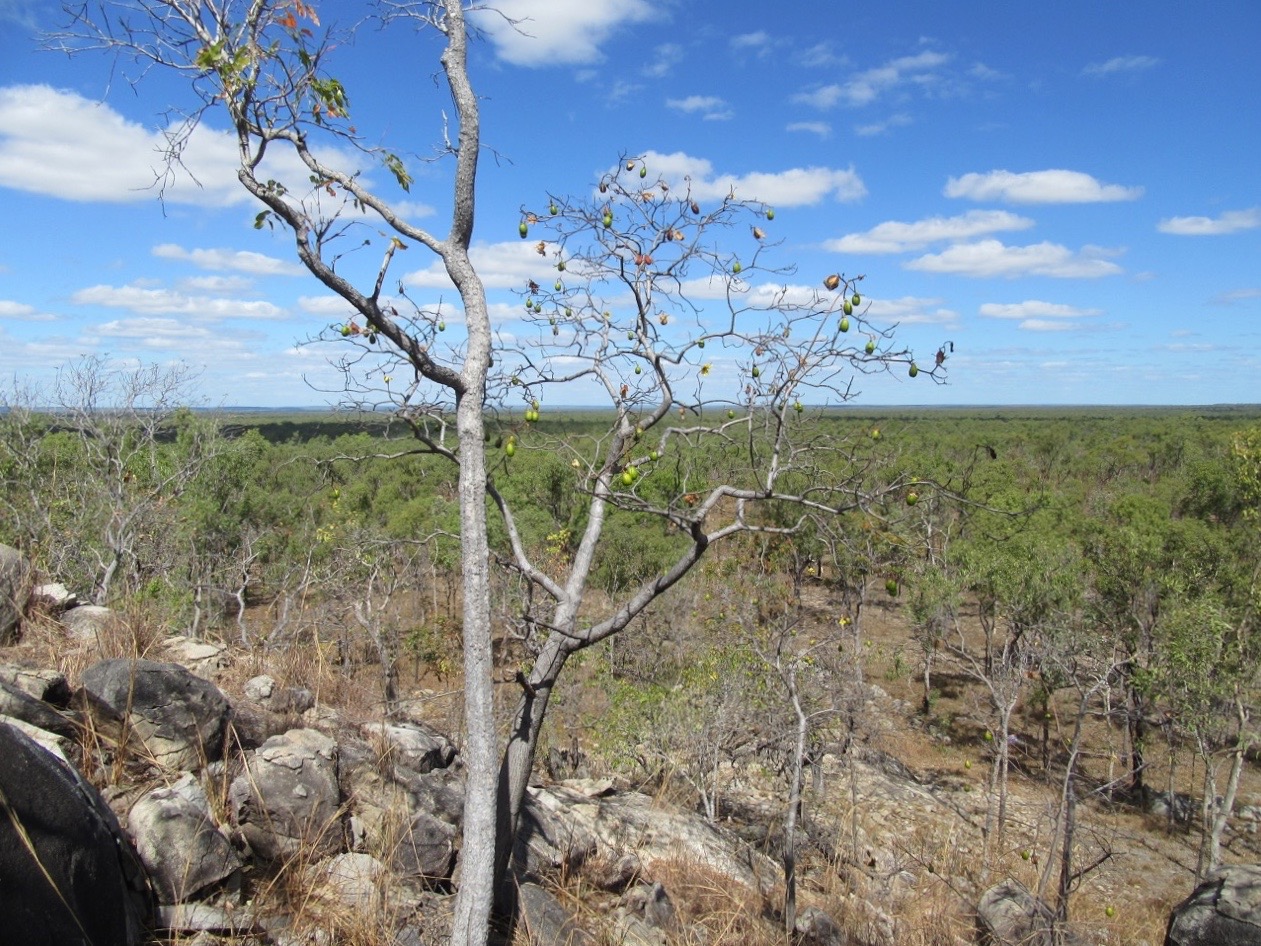 Big sky, far horizons.  Olkola land – as far as the eye can see.

It was the Palmer River gold-rush in the 1870s that led to the ‘opening up’ of Cape York first to gold-seekers and then to the pastoralists who established large cattle stations and began the dispossession of the Peninsula’s indigenous peoples. Many were transported hundreds of kilometres away but, ironically, it was largely the labour and skill of those who remained as stockmen that enabled the cattle industry to succeed.

Over a century later the Olkola people (stress is on the first syllable) of south-central Cape York began their fight to regain their land. Led by Mike Ross, arguably the most respected indigenous elder on the Cape, this thirty-year struggle came to fruition in December 2014 when 633,630ha of their ancestral homelands were handed back to the traditional owners. The adjacent Olkola National Park (269,830ha) was also created at this time and, along with the Alwal National Park, is jointly managed by QPWS and the Olkola Aboriginal Corporation. Five former cattle stations were acquired to form the heart of this handover of which one, Killarney, was to be our base.

At the invitation of the Olkola people the Australian Conservation Foundation (ACF) had become involved in helping to achieve this long-held dream of regaining the land and establishing a sustainable, economic future which would protect the natural and cultural history of this remote and beautiful country. When I received ACF’s invitation to join one of these tours, co-managed with Intrepid Travel, I decided I could not miss such an opportunity. 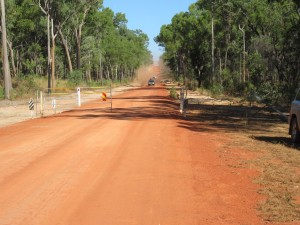 Day 1 began bright and early in Cairns as our group of ten climbed into three waiting 4WDs along with ACF’s Paul and Kathryn, Kerenza from the Olkola community and our two professional guides, Roger (Culture Connect) and Dave (Great Northern Tours). Both are assisting the Olkola people in these initial years and proved to be ‘pure gold’ with their friendly natures, great communication and observation skills and comprehensive knowledge. Soon we were heading up the Kennedy highway to Mareeba, then via the Mulligan Highway, through an impressively dramatic landscape to Mt Molloy, Mt Carbine and our lunchtime stop at Lakeland. An hour or so later we enjoyed one last stop at Laura; beyond here our mobile connections faded away and the bitumen gave way to the long, red road north and west to Olkola country. The changing vegetation was a constant fascination and in parts it seemed almost every other tree trunk was completely coated with the rich red soil, courtesy of a particular species of termite.

Arriving at Killarney we quickly settled into our comfortable tents, where we were to spend the next 4 nights, and were soon ready for a short walk as galahs circled overhead, their colours matching the evening sky. With us were the two traditional owners, Johnny Ross and Jack Lowdown, who were to be our Olkola guides over the next 3 days. We enjoyed a yummy dinner served by Tish and David Ross in our unique dining room, before gathering round the campfire as the brilliant stars blazed above us. As I eventually drifted off into a very sound sleep I had a sense of being in a very remote and special place.

The next 3 mornings we were up and ready for the day’s excursion by 8am. We drove to different places each day with frequent stops to birdwatch, photograph, take short walks and learn about the traditional knowledge of country from Jack and Johnny. There was so much to take in, yet we never felt rushed – it was often surprising to realize just how much we had seen and done each day. One of the most memorable events, and certainly the most moving, was the smoking ceremony held on a beautiful riverbank. Our excited chatter quickly gave way to a deep, respectful silence as Jack welcomed each one of us onto country, in language, with Johnny explaining that now the old people would know that we were there and we would come to no harm. Some people fished at this creek and my tent-companion caught a good-sized black brim which became part of next day’s lunch! In a nearby billabong we saw the eyes and noses of freshwater crocs peeping out of the water, and found an intact crocodile egg on the ground near an eagle’s nest. 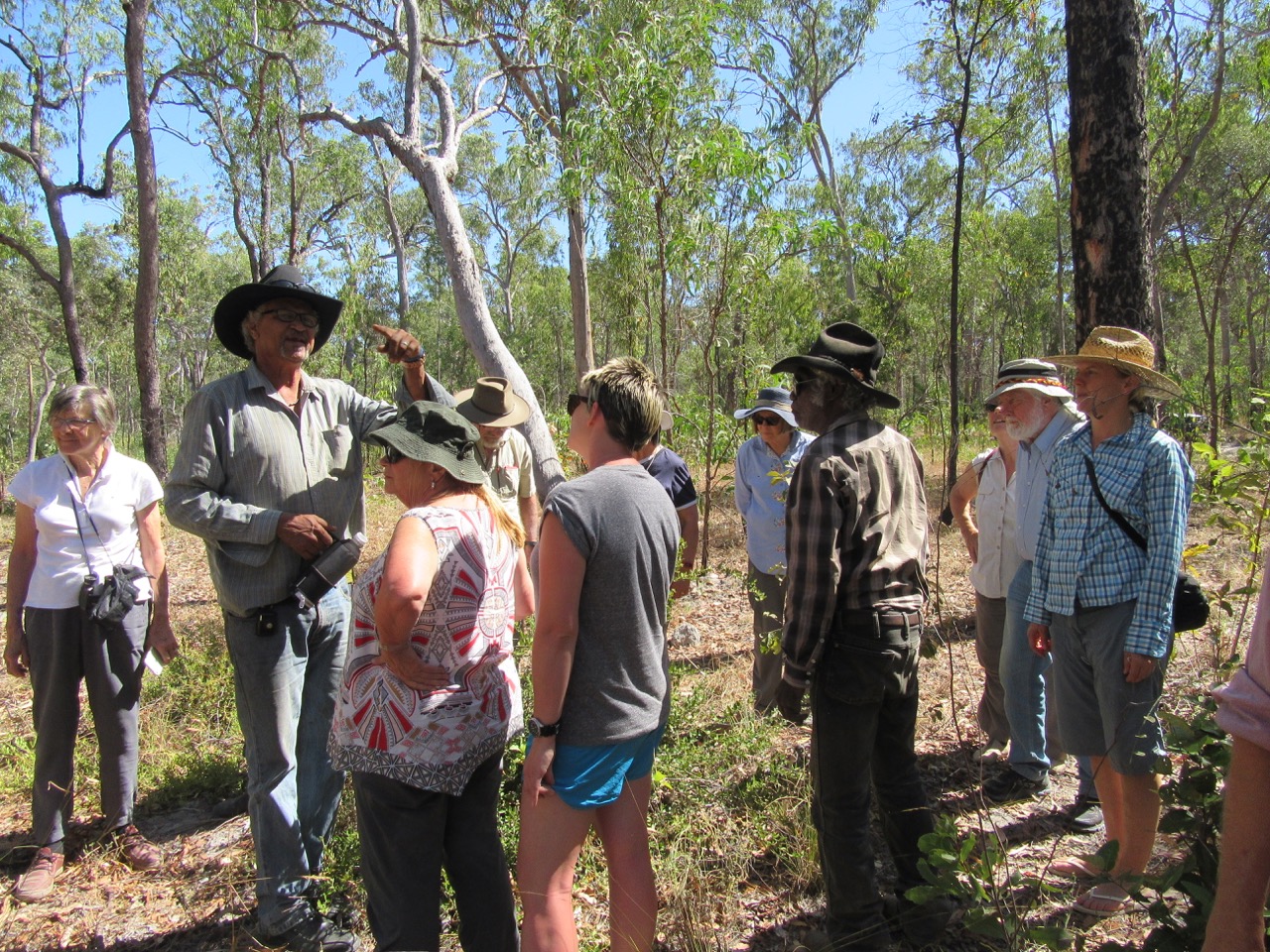 Traditional owners, Johnny (left) and Jack, with the group.

We visited creeks overhung with paperbarks and quiet billabongs, each with their own birds and character. We walked through landscapes dominated by a profusion of grass trees and amazing termite mounds (with which I became quietly obsessed!) built by species of the Amitermes and possibly also the Nasutitermes families, which feed on grass and other plant litter. We admired Lancewood trees, so tall and straight they were used for making spears; we learned to recognize ‘waterbag trees’ and admired the timber of  ‘matchwood’ trees which are resistant to bushfire – for this reason an upturned tree was often used to mark a grave. We pondered over the strange scars that marked the western side of the quinine trees, heard how honey was collected and admired the deeply tessellated bark of ‘plover trees’ where cattle used to scrape the old leaves away and eat the freshly fallen ones. We ate green ants and tried the not-quite-ripe bush oranges from a tree whose crown was aflame with red leaves. We played a game of skill with long bendy sticks and “bushman’s clothes pegs” – the seeds of Grevillea glauca – and found the roots from which boomerangs were made. 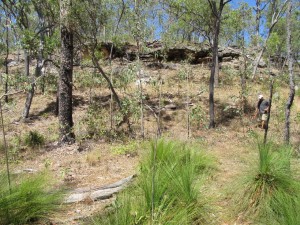 Rock shelter on the Kimba plateau

On the Kimba plateau, containing the headwaters of 5 river catchments, we climbed to a rock shelter decorated with rock art. Another climb took us to the top of a rocky hill from where we had awe-inspiring views across the Olkola land from horizon to horizon. Jack recalled his years as a stockman when for months they would be out in the bush with just their horses and the cattle. We swam at Jungle Creek where banksia cones overhung us and the golden grevillea flowers drew honeyeaters to their nectar. Here and there a kapok tree bloomed and we were surprised to find the purple flowers of the native lassiandra. We found ground orchids in the old Marianne’s stockyard and insectivorous sundews in a sponge-like swamp ringed with paperbarks.

My bird list mounted and I was excited to see ‘new’ birds like grey-crowned babblers, masked finches, a black-breasted buzzard and black-backed butcherbirds – the latter are not found south of the Palmer River.  A pre-breakfast walk showed us a noisy flock of apostle birds drinking from a nearby billabong. “Birdman” Dave was most anxious for us to see the exquisite but endangered golden-shouldered parrots – “alwal” in Olkola language. We had already seen their nest holes built into the western side of the tall, conical termite mounds (the work of Amitermes scopulus) and had been tantalized by finding a single turquoise feather from a male bird. Then, late on the last afternoon, Dave’s sharp eyes found a flock of about a dozen. A thrill and a privilege. 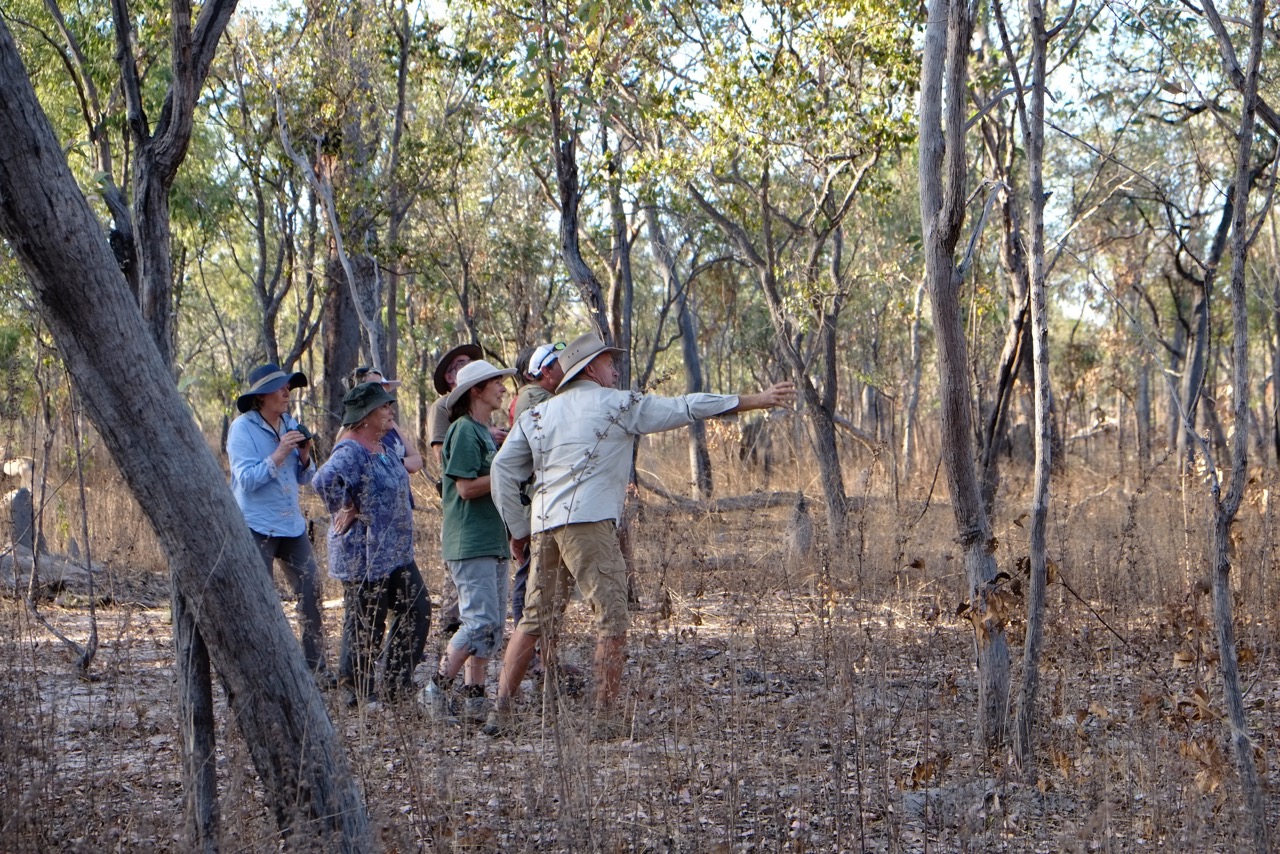 There they are! Thanks to Dave (pointing) and Roger we finally spot the golden-shouldered parrots. Photo Paul Sinclair.

One morning over breakfast a young woman also camped at the property, Jen Redway, explained how she was working with the Olkola people to establish carbon farming through the reintroduction of traditional cool-season burning. The resulting prevention of damaging, uncontrolled wildfires late in the year earns carbon credits, a marketable commodity, and so this ancient practice protects the land while providing a source of income and employment. We also heard of Bush Heritage’s research into how the spread of broad-leafed paperbark woodland (M. viridiflora) may be impacting on the golden-shouldered parrots by increasing the habitat for butcherbirds, one of their main predators. Follow this link for other threats to these beautiful birds. 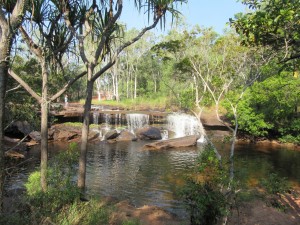 The falls on Isabella Creek

On day 5 we sadly farewelled our Olkola hosts, except for Johnny Ross who was coming with us to Laura, and headed east. Outside Laura Johnny led us up to Split Rock – an impressive sandstone cliff which housed just one of the many wonderful galleries of rock art, ranging in age from 13,000 to 40,000 years before present. See this story for possible mining threats to this ancient heritage. From Laura we took Battle Camp Road, the original route from Cooktown to the goldfields, passing through a section of Rinyirru (Lakefield) NP and stopping to visit the historic Laura Homestead. We crossed the Normanby River, which flows north to Princess Charlotte Bay, and Isabella Creek, which flows into the Endeavour River, trying to imagine how they would look when the monsoon rains come. As we got further east the vegetation became greener and lusher and even the air smelled different –of rainforest, not savannah or dry woodland. By late afternoon we were in Cooktown and pretty much fell in love at first sight. What a charming little town, rich in history and lying in a stunningly beautiful setting – which we appreciated to the full from the top of Grassy Hill the next morning. That night the local Jug Band played Red Gum at the historic RSL building, and at dawn fisherman launched their boats in the clear water while stall-holders set up for the colourful Saturday markets.

By 10am we were on our way via Black Mountain and the famous Lion’s Den pub, heading down the coast road to the Bloomfield River and the infamous Bloomfield track to Cape Tribulation, the Daintree River ferry and Cairns. Along the way we made stops at beautiful Weary Bay and lunched by the Bloomfield River in full view of a very large saltie on the opposite bank! At Cowie Beach, surely one of the world’s most beautiful, we walked to the very edge of the wide expanse of firm, clean sand to gaze back at the mountain peaks behind.  And not another soul was there! The 30 km stretch between Wujal Wujal and Cape Trib was controversially bulldozed through the rainforest in the 1980s by a local property developer. Very rugged in parts, it remains unsealed and still becomes impassable after rain.

Lunch guest on the Bloomfield River bank – or were we the lunch?

This trip was just six days long and yet was such a different and fascinating world I felt as if I had been away for weeks. This link will take you to a folder of photographs to scroll through – it is best to select full-screen view and/or zoom to 100%. Captions should appear at the top, though this may depend on what device you are using.

If you would like to know more, please follow the links below (each include some great short videos and other photos) and I am happy to answer questions about how the trip was organised, cost, transport etc. Although you don’t need to join, for as little as $10 you can become an ACF member and be certain of receiving early advice of the 2017 trips, which is probably better than relying on me to tell you when they are advertised! 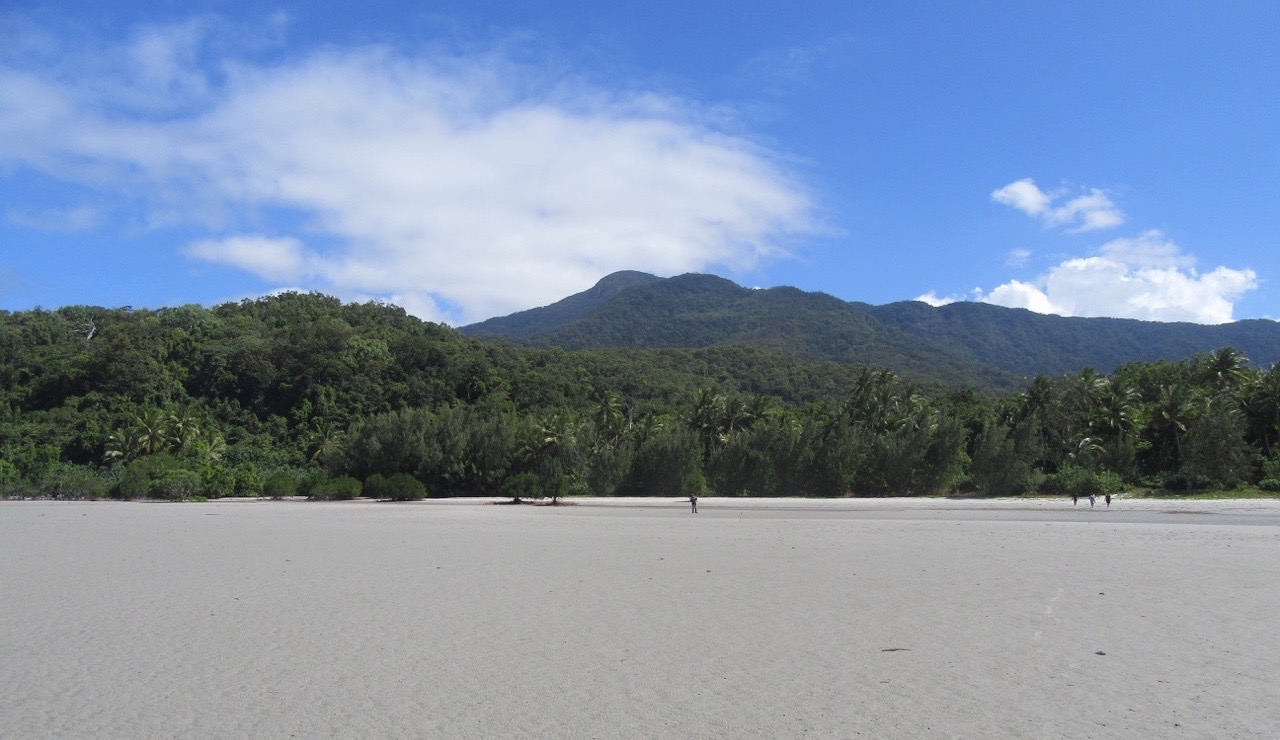