Koels and coucals are calling, curlews and plovers have fluffy chicks scampering around them on the river bank and elsewhere, black flying-fox pups will soon be peeping out from under their mothers’ wings and last night it actually rained, and is still raining (at my place anyway) – all signs of hope and renewal.

Sunday 18th September: Explore Cape Pallarenda’s sandy shores. This month’s field trip will be a sandy shore experience led by marine biologist, Dr John Collins. This will be our third excursion with John, in which we take advantage of a lower than usual tide to explore the creatures that inhabit the inter-tidal zone. In 2014 we explored the reef flat at Geoffrey Bay, last year we investigated the rocky end of Rowes Bay and on Sunday we will visit the sandy shores of Cape Pallarenda at Shelly Cove. As low tide is at 3.43pm this will be an afternoon trip.

Meeting time and place: Meet at the far end of the old quarantine station picnic area at 1.45pm ready to start walking by 2pm. From the meeting point we will follow the cliff path a short way to Shelly Cove which will be the centre of our investigations. We should be finished by around 5pm or earlier, but of course people can come for as long a period as they wish.

Picnic anyone? Come earlier (from 12.30) if you would like to have a BYO picnic lunch beforehand. I will try to get there early enough to grab a couple of tables at the far end of the picnic area.

Saturday 1st October: Mundy Creek Landcare day from 4pm. Join the happy crowd at Mundy Creek for some late afternoon activity. Or for other Landcare sites and events visit their home page. 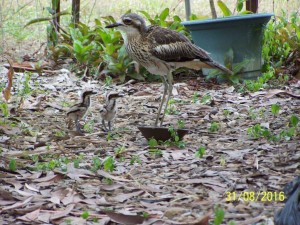 Happy (and not so happy) events. It’s Spring, which means that many wildlife species are producing and rearing young. Two of our curlew family hosts – Laurie at Mount Low and Jackie and Ken in Mundingburra – have been keeping an eye on events in their back yards. At both locations chicks appeared at the end of August after about 2 weeks incubation – with parent birds and human hosts keeping anxious watch. For Jackie and Ken this involved chasing a small python away from the chicks late one night, after being woken by the parents’ alarm calls. Although one of their chicks did not survive beyond its first day, the other is doing well. Sadly, Laurie reported that both ‘his’ chicks disappeared only a few days after hatching. When this happens the parents will almost always produce a second clutch, hopefully with a happier outcome.

Are you a Wildlife Spotter? This exciting ABC Radio National sponsored project completely escaped my notice when it kicked off as part of Science Week last month. However, as far as I can tell, you can still register to become one of hundreds of citizen scientists helping to “spot” wildlife that have been caught on cameras all around the country – all without leaving your home. Find out more here! 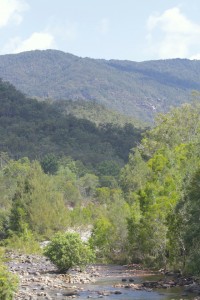 Our August field trip to Big Crystal Creek managed to clash with several other events in Townsville that weekend but still attracted a small group who enjoyed a lovely day in beautiful surroundings. My thanks to Malcolm who kindly wrote up the report of the day, and for the stunning photo at left. While there were birds, butterflies and plants to look at, just for once it was reptiles that provided the main attraction. You can read all about it here.

Garden bird survey wraps up. Deakin and Griffith Universities’ nationwide birdbath and bird feeding survey ended in August, with approximately 20,000 surveys and over 44,000 sightings. There will be another opportunity to take part early next year with the summer survey scheduled for February 2017 (not November as reported last month). A previous study which looked at the hygiene of birdbaths, and how often these were cleaned or refilled, resulted in a paper just published in the Journal of Urban Ecology – you can view it here.

Trees are still falling…. The failure of the Queensland parliament to support the Government’s restoration of vegetation management laws (by a single vote) means the loss of bushland and woodlands will continue, as will the large scale displacement and death of our wildlife – much of it unseen. And with more than half the clearing occurring in reef catchments, the rate of run-off into the reef will also continue and increase. It beggars belief that we can allow this to happen in the year 2016 when we know full well the cost. We can only continue to urge our MPs of the desperate need for these measures and hope not too much more is lost before they are eventually reinstated.

… and cassowaries are still dying. The news that two cassowary chicks were killed on the road at Mission Beach came just one day after signs were erected and video footage posted urging drivers to watch out for this cassowary Dad and his little family (one of the three chick survived). Main Roads are working with the local community and the cassowary recovery team on a trial of vehicle-activated signs to try to reduce these too frequent deaths but only by drastically reducing, and enforcing, road speeds in cassowary areas can we hope to keep them safer. Meanwhile, at the time of writing, I have been unable to get any further information on the fate of Ruthie, the sub-adult cassowary that was controversially relocated from Coquette Point last month.

The Burdekin Dry Tropics NRM Plan 2016-2026 was published recently. It outlines strategies by which the community can manage the challenges of the region, while protecting its biodiversity and improving productivity of those making a living off the land. and can be viewed here or go to this website where you can download the PDF (warning – it’s a 75Mb file) or ask for a print copy.

Cape York adventure: Thanks to the Australian Conservation Foundation, the Traditional Owners of Olkola country, and two other wonderful guides, I have just returned from an exhilarating week on Cape York. I will post an account on this blog when I get time to write it – but if you’ve ever wanted to visit the Cape (especially the parts of it remote from the usual tourist route) more trips are planned between June and September next year.